Savitribai Phule and I

Written by Sangeeta Mulay, Savitribai Phule and I (Panther’s Paw Publication) is the story of Shabri, a shy dalit girl from a deprived village who discovers a diary written by Savitribai Phule. The book details the evolution of the protagonist from a shy introvert who has faced discrimination and prejudice throughout her life to a confident feminist and activist.

In this conversation with Daniya, Mulay talks about the book; Phules’ marriage; the continuing centrality of reservations and more.

She also talks about Rajni Tilak, a prominent dalit rights activist whose birth anniversary was on May 27. 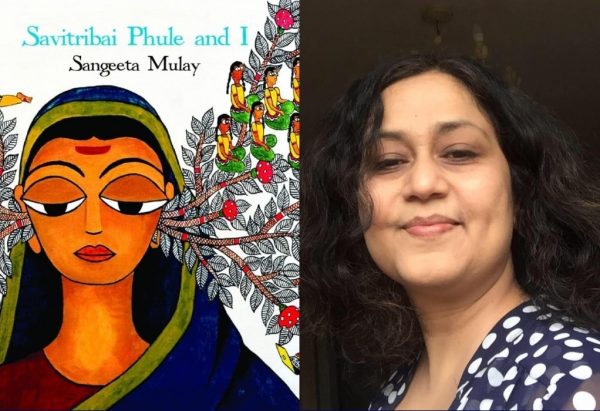 Daniya Rahman (DR): What made you choose the strategy of fictional diary entries by Savitribai for this book?

Sangeeta Mulay (SM): One of the reasons behind writing this book was to spread awareness about Savitribai Phule’s remarkable life with young adults being the target readers. As they are often reluctant to pick up detailed, non-fictional biographies, I wanted to make the book accessible to even the somewhat reluctant reader. Younger readers often find fiction less intimidating than non-fiction. Writing fictional diary entries also gave me control over shaping the narrative while ensuring that the important events in Savitribai Phule’s life were highlighted. My hope is that these fictional diary entries kindle enthusiasm in the readers to read more about Savitribai Phule and maybe even pick up a non-fictional book on her life next.

DR: Tell us more about the apology with which you begin your Letter to the Reader. You begin with: “First an apology. The caste of the author becomes important when you are writing a book on caste.”

SM: My apology was based on a simple premise. This was not my story to tell. Using the resources that my privileged life has accorded to me; I had hijacked the narrative of a dalit girl. This cannot be justified.

Also Read | Savitribai: The Legacy of a Much Loved Teacher

DR: There has always been a tension between the feminist point of view and primacy of the caste/class/ race position. How do we work with or around this tension?

SM: Why not keep things simple? All oppressed voices deserve to be heard. Oppression, misogyny, and injustice can never be justified, and this holds true across class, caste, race, religion, and gender.

DR: What did you find especially valuable about Savitribai Phule’s experience of being educated and taking education to others?

SM: What I admire about Savitribai Phule is her gumption. She educated herself and then revelled in the education that she received. Despite the constant threats and abuses that she faced, she went ahead and started a school for girls. She shook up the social order. She was a radical feminist. She must have made the “casteists” absolutely petrified, which is such a satisfying thought.

What rankles is that despite her extraordinary achievements, she was never given her due.

DR: What in your view, an egalitarian marriage may look like based on the Phules’ marriage?

SM: Jyotiba Phule came from a rural, non-privileged background. What made him take the initiative to educate his wife? Even Gandhi and Ambedkar, whose achievements remain unsurpassed, had not taken this initiative and both Kasturba and Ramabai remained illiterate till the end of their lives. Jyotiba Phule was a feminist. And Savitribai was not a reluctant partner in their journey. She remained a radical feminist in her own right. It is remarkable how the couple shared their passion for progress and feminism although their marriage was an arranged one.

A marriage in which a partner initiates empowerment of the other with both having the right to make and act on decisions, where the benefits, burdens and responsibilities are equally shared while remaining committed to a larger cause would be an egalitarian marriage based on Phules’ marriage.

DR: Can you talk more about education as a key that opens doors for dalits as well as women? Also, about the continuing centrality of reservations.

SM: As long as there is discrimination based on caste, the reservations must stay. Education is just the first step. Getting access to opportunities that provide networks is the next step. The corporates can play a larger role in making education accessible to the remotest parts of the country and ensuring that workplaces are more diverse and inclusive.

Also Read | The Importance of Being Rajni Tilak​

DR: It was Rajni Tilak’s birth anniversary yesterday and coincidentally, her first book was also on Savitribai. Would you like to say something about her life and work?

SM:  Yes, the first book that she wrote was on Savitribai Phule titled Bharat Ki Pehli Shikshika – Savitribai Phule which was published in 1998. She went on to write several books after that and served as the President of the Dalit Lekhak Sangh (Dalit Writers’ Group). Apart from her fight for feminism and her activism, she was known for tackling issues through collaborative means by consensus which is such an admirable trait especially in these current politically aggressive times.

Savitribai Phule and I is published by Panthers' Paw Publication.
Sangeeta Mulay is currently putting together an imprint called "Groggy Eyes" to write and publish fun, feminist and diverse children’s picture books.