Speaking Up
COVID-19, necropolitics and the migrant
May 28, 2020 Tarusi Jain 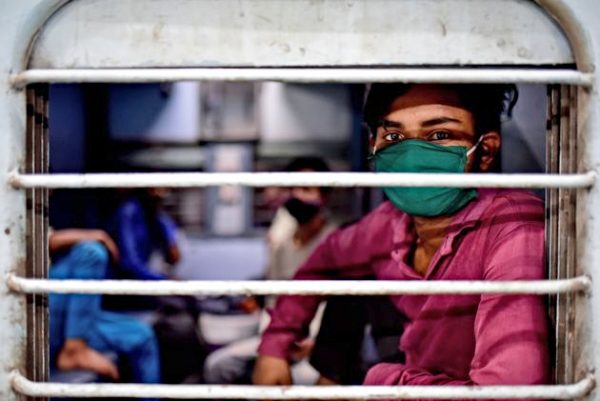 After United Kingdom’s Prime Minister Boris Johnson commanded the UK’s citizens to “take it (COVID-19) to the chin” and revealed his de-humanizing herd immunity strategy, it didn’t take long for the Brazilian President Jair Bolsonaro to say “Will some (people) die?  They will die.  I’m sorry, that’s life”.

How world leaders react to situations of global crises speaks a lot about the world we live in. COVID-19 or the novel coronavirus has wreaked chaos in its wake. Its outbreak was declared a public health emergency of international concern by the World Health Organisation(WHO). The death toll has been rapidly increasing. People are retreating to their homes. Borders are being closed. Imaginary walls are being built. The countries across the globe have declared a “war against coronavirus” by fiercely guarding the borders against the it. This choice of words has been revealing of the growing nationalistic tendencies. The imagery of war is being constantly evoked. When this hail storm passes away and when we will look back, self-isolation, social distancing, lockdowns will be the words that will be rolling out of our palate.

But there is another word, hidden among the repeated words of “The virus is a great leveller” in WhatsApp forwards – ‘Necropolitics’ which is explained by Achille Mbembe in his classic essay on Necropolitics (2003) as the use of power by the sovereign state to “dictate who may live and who must die” (2003: 11).

That is the last thing that the coronavirus is, a leveller. It does not affect everyone equally. This is a virus that affects our capacity to breathe. And it forces governments and hospitals to decide who will continue breathing. Every individual has been brought down to their biological existence which is devoid of its sociality. Each individual is capable of delegating death and to regulate this power to kill, we isolate and self-discipline by policing ourselves, by being hyper vigilante, by inciting and continuing the discourse that is surrounding the virus in order to maintain the prohibition in a Foucauldian way.

These are unprecedented times for India. The country has approximately 120 million migrant workers, of which a significant portion are daily wage workers. When the Prime Minister, Narendra Modi announced a nationwide lockdown with only a four-hour prior notice, the word that hung ominously in the  air was “desperation.” So, while countries were banning all travel and closing their borders, a major humanitarian crisis was raging within the walls of India’s metropolitan cities. Images of destitution and desperation making these labourers walk 100s of miles, with many collapsing, some even dying on the way, spammed our social media feeds overnight. The lockdown, lack of  access to food, shelter, and wages, aggravated their situation. It forced the migrants, with no prospect of earning, to decide to return to their homes, to villages hundreds of kilometres away. They were pushed onto the streets and were forced to make this arduous journey back home on foot because of the suspension of the trains and other modes of public transports. The visible migrants live in uneven shelters where 30 people use one soap, stand in long queaues for food, and use the same bucket to store both waters for bathing and drinking. There are food shortages and the situation is exemplified by caste complexities. But there are also the invisible ones, who live in makeshift tents on construction sites and sleep under flyovers and on footpaths. They live in cramped up slums, with more than 10 of them living in the same room and with a pandemic raging outdoors, which can only be dealt through basic sanitation, hygiene, and social distancing, what happens to those who cannot afford to not live in such proximity?

A global crisis forms the breeding ground for exploitation. The Stranded Workers Action Network (Swan), which has been conducting active relief work across the country, has received more than 11,000 distress calls from workers. According to their report 89% had not been paid their wages and most had just about 200 rupees left. With neither food nor cash, migrant workers have been pushed to the brink of starvation, alarming levels of vulnerability and extreme indignity.

The necropower dynamics of COVID-19 and other epidemics, whether Ebola or HIV, are of slow violence. Migrants have to endlessly endure as they inhabit an extremely precarious space and are being forced to live in this state of exception and invisibility. They are people who can be eliminated “naturally”, who are “let to die”. They are becoming increasingly vulnerable to not just the virus but also to state violence. Everyday humiliations are being perpetrated by forces of the sovereign nation on certain populations. Pictures of uniform clad men wielding their batons towards migrants travelling by breaking the curfew and overturning vendors’ vegetable carts have been captured.

The strategy of “small massacres” inflicted one day at a time, and the absence of basic social goods (e.g. sanitation, housing) bring about a kind of existence whose value “is the sort of death able to be inflicted upon it.” Protest and violence in Surat, lathi-charge to disperse thousands of migrants in Bandra in Mumbai and setting ablaze shelter home in Delhi are only the cases in point.

The present dispensation has been eating into the state’s sense of securitized sovereignty. Now that every individual is capable of being a carrier, the power to kill has been democratised. “The capacity to dictate who may live and who must die” does not rest solely in the hands of the sovereign state anymore. To overcome this delegation of power, it has resorted to the incarceration, infantilization, and demonization of the migrant and has very conveniently brushed the issue under the carpet. The migrants are being seen as “dangerous”, as “trouble makers” and potential “virus spreaders” because they are “unhygienic” and “illiterate” who have no understanding of how the world works.

A glance at daily news headlines would show the state of despair, and helplessness that these workers have to starve through. Migrants have been sprayed with chemicals to sanitize them. Their bodies, which haven’t been granted privacy and autonomy, have become objects to exert power on. There has been an increase in operationalized aggressive state border policing to prevent movement even if they cannot afford to sustain themselves in the city. The installation of these “small doses” of death in the daily existences of many individuals also takes the form of their social death that comes through systematic exclusion from opportunity and violence in order to deny their bodies their social existence. The tools of sovereignty (police) are being deployed, in a biopolitical sense for making only some live, while tools are being deployed, in a necropolitical sense for letting some die; the lives which are considered as surplus and aren’t recognized as answers to the question of “which lives matter?”

Michel Foucault observes (1980), that ‘one needs to study what kind of body the current society needs.’ It’s not the body of the migrant in this context. They have become the newly designated disposable bodies of the pandemic. There had been a ‘famous gradual disqualification of death’ (Foucault 1976) with it becoming ‘a shameful thing.’ The shelters where the migrants are being moved to for accommodation and testing, are rarely shown in news reports and are mostly shrouded.

Who and what counts when counting the dead?  “How the dead are counted and assigned value matters just as much as which dead bodies are counted.?” Only a fraction of the non-virus deaths is being reported by the media. According to a credible database put together by researchers, there have been 384 non-virus related deaths, with 47 of them dying due to starvation and financial stress. These deaths are being privatised. It is not something for the state to deal with. Those migrants who have died will slip out of the public eye and disappear completely. They also work to limit the scrutiny of fatalities produced by bodies’ necropolitical exposure to the power of death and therefore to safeguard necropolitics itself.

In the early hours of of March 8, 2020, 16 migrant workers, 8 of whom were Gond Adivasis,  were crushed to death by a goods train in their sleep when they were attempting to make their way their homes in Madhya Pradesh. The state, which is charged with the capacity to dictate over life and death, has displayed a blatant lack of concern for the migrant, in the current crisis. Food, shelter, and income to poor are nobody's concern. But there’s a constant emphasis on downloading an app that might just magically save the life of a starving migrant who is on the verge of collapsing.

The government keeps on emphasizing that the employers should not stop wages of laborers and brazenly ignores small business owners, who themselves are barely surviving, and the self-employed. The future will see lots of starvation deaths and destitution. The only solution, as Advocate Prashant Bhushan says, to the problem is for the government to transfer cash to the poor by the government. Policy measures that sustain the economic livelihoods of those hardest hit should be implemented.