Speaking Up
Lockdown has killed at least 516 Indians
May 22, 2020 Kanika Sharma 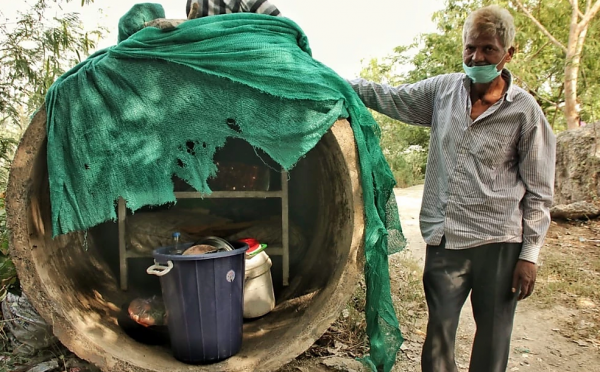 A migrant worker makes his home in a concrete water pipe as he waits to head home/SANDEEP YADAV, KARWAN E MOHABBAT

Seventeen-year-old Anita, a migrant worker from Madhya Pradesh, saw her four younger siblings starve for two days, after she and her father found no work in Jalgaon, Maharashtra, due to the world’s most-stringent lockdown. The food packets provided by social workers did not last long. She had to beg the neighbours for help. On 11 May 2020, she died by suicide.

Since 29 March, we have tracked deaths caused by the lockdown, collating data from newspapers, online news portals, and social media in a handful of languages—primarily English, Hindi, and a few regional languages (Kannada, Marathi, Tamil, Bengali, Odia, and Malayalam).

We then verify them, check for duplicates, categorise and eventually add them to a public database. As of 14 May 2020, our database reflects the following deaths: 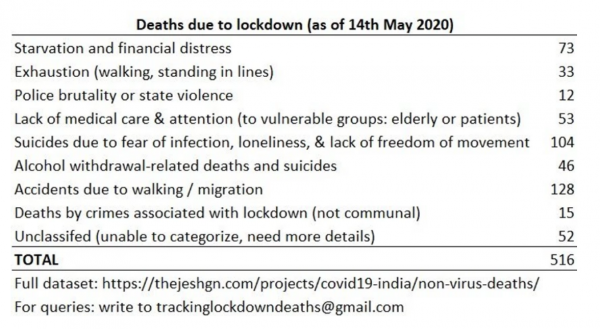 Their deaths tell the story of an unfolding humanitarian crisis, largely because of a harsh lockdown, announced at four-hour notice, in which essential support was an afterthought.

A large majority of those dead are from the poorest sections of the population: migrant workers, daily wage labourers and patients who needed timely medical care. While Covid-19 may not necessarily discriminate between the rich and the poor, the burden of death due the lockdown is largely borne by the poor and the vulnerable.

The number of deaths due to accidents, including the 16 workers who were run over by a train in Aurangabad, indicate the desperation of stranded workers to reach home. The humanitarian crisis caused by the lockdown is largely shaped by India’s deep social and class inequalities.

Suicides caused by fear of infection, loneliness, lack of freedom of movement and inability to go home have also spiked, as the lockdown has lengthened. For instance, a 20-year-old migrant worker from Odisha died by suicide in Chennai because he was unable to go home despite a long wait. These deaths are a sign of hopelessness and fear spreading in communities.

At least 53 people have died because of lack of medical care and other attention. Such deaths include delays or blockades in ambulance travel, irregular essential health services other than for Covid-19, lack of attention to dependents, and refusal to treatment by hospitals. In one such case, a pregnant woman with labour pain was refused treatment by several hospitals in Meerut, Uttar Pradesh. She finally had a stillbirth with the help of a midwife but died.

(Kanika Sharma is a researcher focusing on social inequalities in health in India. The database of lockdown deaths is maintained by Aman, Kanika Sharma, and Thejesh GN, with the support of Roadscholars, freelance scholars and student volunteers interested in action-oriented research, socio-economic rights and related issues.)