Speaking Up
The poor take charge of own destiny as govts look away
May 19, 2020 Seema Mustafa 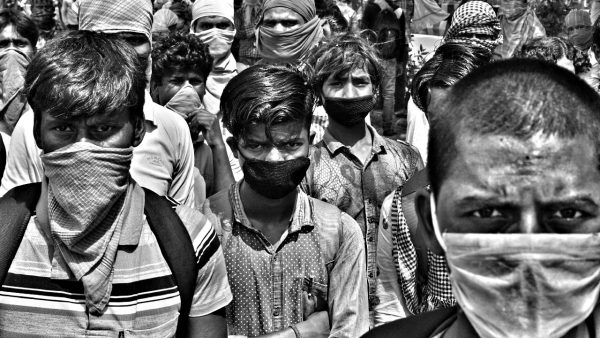 The BBC Hindi correspondent while interviewing a group of migrants saw that the man carrying a child and clearly in charge of the family around him was bare feet. Why are your feet bare, he asked. My slippers broke, the man replied. The journalist took off his shoes without pause for thought and gave these to the man to wear for the hundreds of kilometres walk home.

A labourer had no slippers and combined ingenuity with despair, wearing two water bottles as shoes tied to his feet.

Even while writing this, news has come in of the death of yet another load of workers, crushed as the truck in which they were hitching a ride overturned.

Hunger, exhaustion, desperation all enforcing the determination to reach home, in their villages far away. There are tears when someone stops to speak with them, but otherwise a strange kind of sense of purpose, a steadfastness in the face of acute distress and adversity. Very visible in the woman walking with her belongings on her head, holding a crying toddler as she almost drags him along, followed by two others, clearly hungry and under clad. The goal is so clear in their mind that the journey on roads of thorns pales in comparison.

And while some can even see flashes of these scenes from their windows, the migrants have become invisible to those who rule us. And to the political leaders in general. Except for the Left and a photo-op by Congress president Rahul Gandhi there has been little from the Opposition by way of bandobast for the labourers and workers. Prime Minister Narendra Modi had little to say for them. Finance Minister Nirmala Sitharaman grimaced her way through a series of press briefings seeking to convince that the package being announced was indeed a stimulus. And not a word of solace, of compassion, of support —all qualities that define human beings and make us different from other living species—for the lakhs of India’s poor trudging long distances home.

The suffering is acute. And the deadened urban conscience unbelievable. The most serious humanitarian crisis seen in decades where the people of India are walking on the roads, not for a festival, but out of sheer distress has elicited no reaction. A retired Army senior said that if the military had been used as it has in the past for floods and earthquakes it would have transported the migrants, set up shelters with sufficient food and water, and made arrangements that would have brought them much needed relief. “Instead we showered petals” he said wryly.

It has been left to civil society and the good samaritans who are trying hard but not in position to dent the suffering, to provide food and clothes as and where they can. This despite the effort is little more than a drop in the ocean with India’s poorest on the roads, fleeing the cities for the villages. The tragedy is their homes do not want them, their states have placed barricades to prevent them from entering with police using its famous lathis to drive them away. One cannot forget the elderly daily wage worker who when asked by the journalist what is the one thing he would ask for if given a chance, said, “dignity. Do not give us food, but please take away the police lathis, you are beating us and taking away even the one thing we did have, our dignity.” Others around him when asked by the same journalist did not ask for food either, just said, “we want to go home.”

But home is where they are not being allowed to go. If some have been caged in construction sites in posh Delhi — labour working before the lockdown were locked in behind the high walls of the construction sites, made silent and invisible by the contractors —others are being stopped at the borders. Even now. Despite the second wave of the long march. The woman giving birth on the side got no help, the child dying after gasping for breath did not stop a passing car, the men weeping because they could not provide food to their starving children walking alongside did not elicit a comment from Prime Minister Narendra Modi and his Finance Minister Sitharaman.

Economists juggle over the figures, is the stimulus really Rs 20 lakh crores or far less as it adds zero’s from committed budgets, the government insists it has beaten the developed world in the size of its stimulus, but the reality on the ground belies all claims. Opposition leaders from the regional parties are barely seen or heard, and while one would like to join the applause for Congress leader Rahul Gandhi standing by the migrants in a part of Delhi, it is difficult given the fact that two Congress ruled states —Rajasthan and Punjab—have joined the BJP ruled states in diluting the labour laws. And in short, ensuring that the distressed poor of India are denied even the little that was theirs earlier.

It is unfathomable how blind we have become to not just our poor –that perhaps we have always been—but to the acute distress that our policies have inflicted on them. That thousands are on the roads just walking endlessly, should not just prick India’s conscience but hurt it to a point where the governments move the earth to bring them relief. A family of four from the North East making and selling momos for a living waited it out for two months with destitution staring them in the face. They applied for the so called ‘repatriation’ trains or buses to go home but have received no response. And as they said, “even if they take us they are charging such high rates, we will not even be able to afford it now.”

Except for Kerala that has brought compassion and sensitivity as well as professionalism into its entire handling of the pandemic, all other impacted states seem to have thrown their hands up along with the centre. The cases are spiking, big cities like Mumbai and Delhi are flashing red with the former at the edge of the pandemic precipice from all accounts, and the vestiges of a plan for complex India still not visible.

The poor in the silent, unspoken decision to walk have sent out a loud and clear message. India’s workers, labour, daily wage earners —the task force of development really– have lost all faith in the cities, the politicians, the governments, the authorities and in this long march made it clear that they have taken charge of their own destiny. Asking for nothing, expecting nothing.