Speaking Up
Working from home while being watched from home
May 18, 2020 Sreedeep 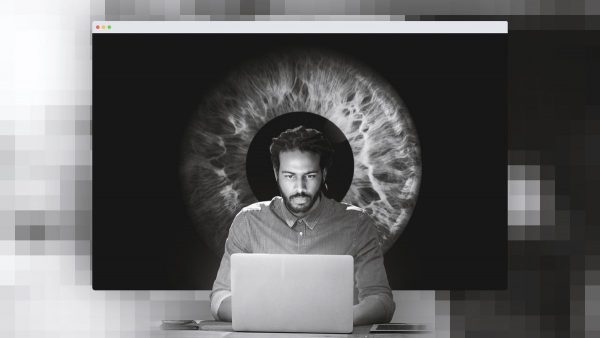 “The labourer works under the control of the capitalist to whom his labour belongs”—wrote Marx. A century has passed since then. The means of survival have transformed in the meanwhile. The nature of information exchange and the nature of labouring have altered significantly over the last few decades. There is a decisive shift from labour-intensive production to the predomination of information-intensive services. While the debates on the unequal power equation between the two antagonistic classes spin the same exploitative narrative, Shoshana Zuboff, in her book, The Age of Digital Capitalism makes us cautious about another, new, uneven power relationship—that between the watcher and the watched.

Power over knowledge and knowledge of power are the twin matrixes of the neoliberal regime. WFH (Work from Home) is not an exception to this operational matrix. De-territorialised mechanisms of control in the digital era have further enhanced capitalist control over the workers. Penetrative surveillance umbrellas have been imposed all over. Tracking techniques are aiming to be more and more accurate—caring less and less about the violation of privacy.

Privacy is the sacrificial goat and data is the new capital in an age of data-colonialism. And why not, when Bluetooth and WiFi can overcome those spatial and temporal barriers that even Covid-19 cannot! Several soft-skill-based white-collar jobs can now be performed with equal ease while sitting at home.

WFH in the context of Covid has caused an unprecedented confluence of household work and office work. In fact, it has resulted in the demise of the binary between time-for-work and time-for-home; between work-space and family-space. The wall of separation between strictly designated spaces for work and home has fallen. The collapse of the heavily-guarded and hugely-rigid membrane between the professional and the personal domain has had bizarre consequences on both fronts, as we have witnessed and experienced in the last few weeks. On the home front, you are forced to spend more time with family, if you have one. And you have to tolerate all those familiar faces and their tantrums for a much longer duration, not just after work.

On the work front, you are possibly more accountable than ever before. You are required to remain more visible to register your work-footprints—online—all the time. Unimaginable proximity with digital surveillance in our everyday life has ensured that we have no place to hide our selves once we log in. We stand exposed in front of its invisible operational logic and its algorithmic structure. WFH has revealed how the digital interface can be used to declare our jailed status updates, and also announce: 1) our loss of control over time; 2) loss of control over time taken out of time; 3) absence of own-time even when we are at home. And that cannot be a recipe of freedom, for sure.

Time has always been a precious commodity to be bought and sold. But now, for the corporate sloggers at least, there is no free time even at home.

“My boss now expects me to be available at 8.15 in the morning. It’s really irritating. Earlier, I could be on phone, or listen to music while travelling to work,” said a friend in the insurance sector sounding thoroughly frustrated. She said her supervisor sends a morning email at eight to all his subordinates, who are “team leaders”, and keeps an eye on how many of them see and respond to it immediately.

There is an expectation to be and remain available for twelve to fourteen hours—and no excuses! Hoping to get back to the normal office routine, she says, “I definitely had more time for myself and my family earlier. Now I feel totally trapped. We are all aware of the longlist of set-goals, best-practices, performance-parameters, etc. After working in this sector for more than fifteen years, do you really think that I need a brush-up dosage of all that every morning?”

Does this entrapment necessarily transform into more meaningful work or increase in productivity? An IT employee sounds cynical, “It’s less about work, more about showing-off that we are working and not sleeping at home, and continuing to meet regular targets, if not more. Most of the con-calls and online meetings are unnecessary.” Then what is the reason behind such unnecessary hangout calls? He says, “Mistrust…what else? They think that left to our own [devices], we will not finish anything on time. Or they think that being visible is directly proportional to productivity. Hence, [we get] a regular reminder, to maintain the work pressure.”

A frontline sales manager adds, “I really don’t need to make so many client-calls just for the sake of it.”

Whether at home, or in the office, or while travelling for work—employees are assets to be manged. They should be judged and offered feedback by using different tools and systems. Online rewards and recognition may follow on the basis of frontline visibility of the workers, even when they are working from home. Have you ever given a thought to what would have happened if Covid-19 had cast its spell before the advent of internet-induced visibility? What would have happened to the nature of WFH? While that is best left to everybody’s own imagination, it is necessary to reiterate that the digital interface has not freed us from the institutionalisation and standardisation of a monotonous work regime. It has only transported surveillance into domestic quarters. It has made it easier to regulate and supervise anyone at home. Discipline through visibility visibly runs through its operational logic.

The repressive work regime demands multiple ways of disciplining the body. The body is under the scrutiny of non-stop high-definition visibility facilitated by unlimited data. It can demand the body to wake up earlier—now that you are saving time and energy, as you do not have to travel to work. Non-stop performance or its pretence has to go on. This extractive process has reconfigured the relationship between idleness and work. Relationship between free time and work is now getting reconfigured at home. And it is possibly lot more alienating than ever before.

Work from home is an inversion of the routinised work mechanism. The age-old relationship between working and resting has been challenged—making the act of “working from home” the new normal. We own manipulable bodies which are objects of organised corporate powers that require heightened efficiency. The corporate powers demand activity and productivity irrespective of workers’ location. Constraints, prohibitions, obligations apply accordingly. Obedience is valued. Home is the new “enclosure” where the virtues of time and the time-table are being reworked to ensure non-idleness.

This was inevitable. Digital observatory techniques were already in place to oversee efficiency through repetitive performances. The role of compulsory visibility and the architectural relationship between visibility and power is best articulated by Michel Foucault in his book, The Birth of Prison, in which he says: “The exercise of discipline presupposes a mechanism that coerces by means of observation; an apparatus in which the technique that makes it possible to see induce effects of power, and in which, conversely, the means of coercion make those on whom they are applied clearly visible.”

The network of the gaze and spectacle of surveillance is complete with the ease of “anytime visibility”, and with the predictability of the worker to be found at home. At home, you can always be seen—continuously and compulsively. You can easily be tracked and burdened with yet another task—any time of the day or night. And we are waiting to be rewarded for being visible and be punished for our invisibility.

Subjugation is complete at home.

First published in Newsclick.
Sreedeep is a sociologist with Shiv Nadar University. His book, Consumerist Encounters: Flirting with Things and Images, is forthcoming from Oxford University Press. Views are personal.