Speaking Up
A catastrophe of exclusion and obscene inequality
May 14, 2020 Ash Narain Roy 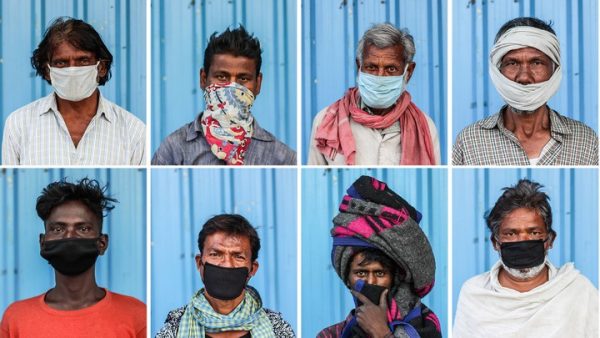 Socrates was born in Athens but he considered himself “a citizen of the cosmos”. HG Wells believed borders eventually disappear, and geopolitical gurus have proclaimed the “end of geography”. The protagonists of globalisation celebrate the advent of borderless world. “The future has a new home,” the website declares of a megacity being built in Saudi Arabia.

The coronavirus pandemic has shattered all such dreams and utopias by exposing our collective vulnerabilities. After all, the future has a way of arriving unannounced, and we’re too shocked to welcome it. Whenever the dream city does come up, this new home, brainchild of Prince Salman as-Saud, it will not be the future of humanity. We are nursing now a fear of the future, but we have a different future in mind: the future of the past.

The never ending caravans of migrants marching along well-laid tracks and highways carrying children and their belongings become the next defining moment in India’s development path. The humiliation of the poor and of innocents, the disdain for the marginalised, the utter callousness towards their plight manifest how little India has moved up the ladder of social inclusion, and how the othering of people — making them something other than ourselves — has only expanded the India/Bharat divide.

His own body was a site of resistance for Gandhi. Migrants’ bodies too are sites of resistance. They carry not just their belongings but their world on their bodies. They know there isn’t plenty to eat back home either but they know there will be no humiliation there and they will not be viewed with scorn.

The pandemic reminds us how, in Frank Furedi’s words, “belonging to a community is the most precious asset that human beings possess.”

With migrants trying desperately to leave, where are the leaders they elected to represent them? Is India on the way to becoming a country without citizens. The logic of next exclusion suggests migrants have become non-citizens..

Disasters begin suddenly but never really end. New pandemics are on the horizon. The UN has warned that we confront a hunger pandemic, a humanitarian and food catastrophe.

Also a catastrophe of exclusion and obscene inequality. The Union lockdown is a death sentence for famished workers. Sixteen people were run over by a train in what was an avoidable tragedy. The victims had received no response to their request for a transit pass. It is a tragic reminder of how the bureaucracy gives two hoots for the poor and indigent even during a pandemic.

The migrants’ desperate march will haunt India for a long time. It exposes the hollowness of the development story. The political class ignores what Vaclav Havel wrote about “the power of the powerless”, at its own peril.

This health crisis will become a painful economic and social crisis. The face of globalisation will change. The world cannot afford to drink this cup of hemlock for the market’s greater good. The world rejects the one-way street, where all the vehicles travel to the rich leaving only exhaust fumes for the poor. Now the state will play a crucial role in partnership with civil society and other stakeholders, intervening to prevent capitalist markets from becoming “Satanic Mills”.

Our planet is on fire. It has survived five mass extinctions, being clobbered by rocks from space, mass poisoning and lethal radiation. Today it faces apocalypse of a human kind. Hundreds of thousands of people in Africa and Central America are already migrating as a result of the climate crisis. The same drives asylum seekers to enter the US. According to a new study, more than three billion people will be living in places with near unlivable temperature by 2070. The areas thus affected include India, Africa, South America and parts of West Asia. With the worsening global situation of hunger and destitution, aid agencies will proliferate. But will that help? Given their past record, no one has confidence that these donors will swing for the fences.

We are on the horns of a critical moral dilemma. Truth’s empire is in decline, with an epidemic of dishonesty and the death of compassion and an assault on good. But there are some good signs as well. Forty mayors of cities around the world including Los Angeles, New York, Barcelona, Athens, Copenhagen, Buenos Aires, Hong Kong, Sydney and Seoul have issued a statement of principles to shape the recovery from COVID-19, saying there will be “no return to business as usual”. The statement stresses this “is not just a global crisis, but a social and economic crisis, the effects of which will be felt for years to come.”

As the ecological crisis deepens, we will continue to witness waves of migration. Whether running from something or towards something, a migrant is on the run. Migrants bear the burden of a failed state. They have a fear, of no future. And we are all migrants today. As Laila Lalami puts it: “I am an immigrant, someday, you might be one too”.

First published in The Citizen.
Ash Narain Roy is Director of the Institute of Social Sciences, Delhi.