Speaking Up
Delhi University: No salary during pandemic
May 12, 2020 Newsclick Report 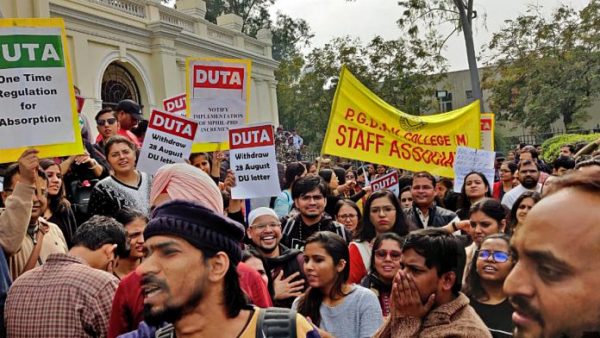 After much deliberations, Delhi government recently released the grants of Rs 18.75 crore for 12 colleges in Delhi University funded by it for paying salaries and other expenses. The grants were awaited for long after the teachers alleged that they did not receive salaries for the months of March and April. However, the released grants were later found inadequate and came with a rider to which teachers deemed “distasteful” and “unfortunate”. The latest sanction order suggested that the grants will be released only when all colleges funded by Delhi Government complete the formation of governing bodies.

In its response to the sanction order, Delhi University Teachers’ Association has written a letter to Delhi Chief Minister Arvind Kejriwal and maintained that the amount disbursed to colleges will hardly suffice for salaries for vacation period and other expenses including medical reimbursements. The association said, “Grants to these colleges were delayed by several months and employees had to remain without salaries. The grants, when sanctioned, are much less than the money required to cover salaries up to April. The grants sanctioned on 25.3.2020 were barely enough to cover salaries of January and February. As a result, many colleges have not been able to pay salaries.”

The assessment made by the Association, after receiving feedback from staff associations, suggests the colleges still need Rs 23.41 crore for full payment of salaries and other necessary expenses. While Acharya Narendra Dev College has the highest deficit of Rs 6.15 crore, Indira Gandhi Institute of Physical Education and Sports Sciences has the lowest deficit—of Rs 20 Lakh. The deficit has severely affected the colleges with many failing to fill the vacancies under recently implemented EWS quota.

Rajib Ray, President of the Association, in the letter, said, “The 12 colleges are in dire need of the additional funds necessary for development of infrastructure for smooth academic and administrative functioning… Some of the new courses that were started after obtaining the necessary approvals are being starved of funds required for appointing teachers to run these courses. The delay in doing so, despite repeated reminders, has undermined the teaching learning process and affected the quality of education imparted in these institutions.”

Responding to the issue of formation of governing bodies in the colleges, the association said that the issue needs to be resolved through proper dialogue among college principals, university administration and the Delhi Government. The teachers maintain that some forces wish to check the political influence of the Aam Aadmi Party in the campus by stalling the formation of governing bodies. In the absence of governing bodies, the colleges have been appointing teachers without due process. The Delhi government had objected to it and asked for representation since it was the main funding agency for these colleges. As per existing norms, the colleges under Delhi University have 15-member governing bodies. The Delhi University sends a list of persons eligible for appointment to these posts. From this list, Delhi Government gives its nod to five members. Additionally, it proposes five members to the body. Rest of the five members are recommended from the university administration, teachers from different colleges on a rotational basis, and the principal of the college.

The association said, “The issue of grants, especially salaries of employees, cannot be linked to the formation of Governing Bodies. Teaching and non-teaching staff have no role in the formation of Governing Bodies. Non-payment of salaries is an extremely serious issue. It is a violation of the basic rights of employees who have been performing their duties.”

Ray added, “The matter of governing bodies needs to be resolved at the level of college and university administration. During this pandemic, when colleges and the university are not able to function normally, putting such a rider is unfortunate. In case the Directorate of Higher Education has some proposals about how formation of governing bodies can be facilitated in the current situation, the same may be raised with the principals and the vice chancellor.”