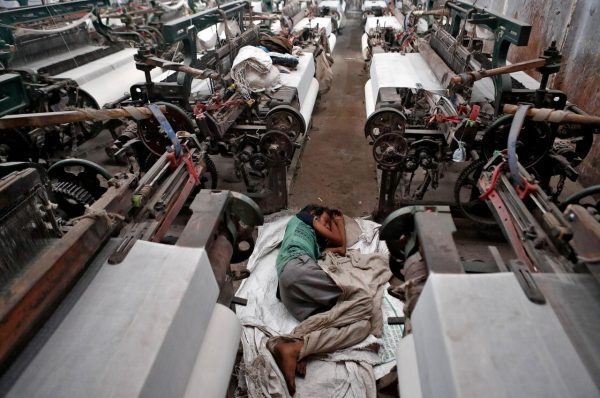 A migrant worker rests inside a loom after it was shut during the nationwide lockdown, in Bhiwandi (Reuters)

Several post-lockdown incidents have highlighted the plight of workers, who have been left to their own devices, without any state support, and forced to travel hundreds of kilometres to their homes. In the most recent episode, 16 migrants attempting to return home were run over by a train in Aurangabad.

The common thread that connects them is their dependence on the informal economy. However, two other things cannot be overlooked. First, their life before the pandemic was relentlessly back-breaking. Second, the post-lockdown distress which workers in the informal economy are facing has to do with structural factors that define the sector—unequal power relations, lack of job security, and absence of regulatory mechanisms. In the face of a crisis, it explodes, destroying the lives of many.

India’s informal economy is enormous. It consists of export-driven industrial clusters, manufacturing hubs, enterprises which deal with precious gems, a vast majority of agrarian production, street vendors, and a large part of the black economy. Estimates for 2018 indicate that 80% of India’s 461 million workers, or 369 million of them, are in the informal sector. Even in the formal sector, several workers are employed as informal workers, as casual labour.

Despite islands of prosperity such as the diamond-cutters—who live in conditions comparable with workers in the formal economy—for a large number of informal-sector workers, domestic and work spaces converge into one. These workers either eat and live at their place of work or their work is conducted in congested domestic spaces. Unlike the formal sector, there is no regulation of wages, living conditions, working hours, and other social security nets. Due to their paltry wages, occupational multiplicity is the only way many workers can make ends meet.

Scholars have pointed out that the formal-informal duality should not let one lose sight of the continuum between the two: the informal economy plays an active role in the functioning of the formal economy, for it is symbiotically linked to big businesses, which subcontract and outsource cheap informal labour.

Now, how has the informal economy come to occupy such prominence? Scholars have pointed at the development trajectory of the post-colonial Indian state to explain this phenomenon. They find that budget deficits were the norm for the rural underclass, as a direct result of the development trajectory of Indian capitalism. The urban-rural mobility in the industrial West is characterised by the “free labour” deciding for itself how and where to sell its labour-power; but this has proven non-applicable to the post-colonial Indian situation. In particular, because of the absence of land reforms, the only option for the Indian rural poor was to migrate (including as bonded and neo-bonded labour) in order to survive.

Second, labour legislations which were passed immediately after Independence were mainly designed to define the industrial procedures and to solve disputes between employers and workers. These legislations exclusively addressed labour and employment in the organised sector. These laws were designed mainly with the hope to expand into an industrial society, even if the size of this sector was always minuscule compared to the economy as a whole. As a result of diminished attention to a great segment of the urban population and neglect of the social relations of production in agriculture, the process of informalisation was accentuated.

To sum up, informalisation—which ensured a precarious existence for the vast majority of workers left at the mercy of their employers and contractors—should be understood against its background in the post-colonial development trajectory of our country.

The asymmetrical power relations which define the informal economy are also apparent in the legal framework which covers it. On the one hand, laws specifically formulated to deal with labour in the informal economy often overlook certain key questions regarding the target group. Second, even when the text of the law is honestly intended, the implementation is significantly influenced by existing social power relations, which are skewed against informal labour. It is this entrenched powerlessness that has had a decisive impact on the informal labourers during the lockdown.

For instance, only enterprises which have employed twenty or more contract labourers over the previous twelve months come under the ambit of the Contract Labour (Regulation and Abolition) Act, 1970. Micro-enterprises in India regularly employ less than twenty people; therefore, despite its progressive components, a large number of employees of informal enterprises remain out of the purview of this law. Concerning implementation, large-scale corruption due to the collision of the state with contractors and the absence of sufficient state capacity to implement the act has made it ineffective in many places. Despite flaws in this law, if implemented properly, its provisions could have enabled the government to access data on contract labourers and provide them assistance during the lockdown.

Similarly, the stated objective of the Interstate Migrant Workmen Act, 1979, is to regulate and law down the conditions of service of inter-state migrant workers. This act mandates registration of contractors who employ migrant workers and for employers to maintain a record of their workers. However, by design itself, it excludes a vast majority of self-employed wage labourers and intra-state agrarian and other migrants in the informal economy.

The 2011-12 report of the Standing Committee on Labour records that eleven states do not have a single employer or contractor registered under this act. The highest number of registered contractors and principal employers under the act was in Bihar, but the figure was as low as 20 and 56 respectively. If reviewed and implemented correctly, this law would have made it much easier for the government to assist migrant workers during the lockdown. Unfortunately, that was not the case.

The rare progressive legislation, such as the Building and Other Construction Workers (Regulation of Employment and Conditions of Service) Act, 1996, or BOCW, acknowledges the seasonality and precarious nature of employment and defines anyone who worked in the construction industry for 90 days in the past year as a construction worker. This law makes registered establishments responsible to provide housing and child care facilities to workers and obliges state construction boards to register workers as beneficiaries of several welfare measures. However, each worker needs the employer or a trade union to certify them as a construction worker to avail these benefits. The lived reality of a large section of informal workers are overlooked by this legislation—they keep migrating from place to place and are largely non-unionised and undocumented.

Further, a recent study conducted by Jan Sahas finds that only 29% of the 20.37 lakh labourers registered under BOCW Board in Uttar Pradesh had access to a bank account. Predictably, the study also finds that more than 90% of the construction workers they interviewed were outside the ambit of this act since they do not have BOCW cards. In this situation, the central government directive to the state governments to use the collected BOCW cess funds to aid workers during the lockdown becomes toothless.

Another act, the Unorganised Sector Workers Social Security Act, 2008, (or USSA) mandates the registration of unorganised workers—including home-based workers—by state social security boards as beneficiaries of several schemes. As many schemes under this act already exist and overlap with other target populations, there is no database to assess the registration of informal workers.

A PIL filed in 2013 in the Jharkhand High Court  by the National Domestic Workers Welfare Trust points out that the entire state of Jharkhand had not registered a single beneficiary under the Master Craft Persons scheme, one of the ten schemes covered by the USSA. So while the Act professes to protect the rights of unorganised workers, its vague directives and the state’s lack of will in registering workers results in many exclusions.

During the lockdown, several states started surveying their migrants. Had there been specific schemes for informal workers, coupled with the will to register them as beneficiaries in the states, and clear directions in the act to fund the state boards, the system would have been better equipped to deal with this crisis.

The existing legal discourse is, at least theoretically, guided by a vision of welfare, but the guiding principle of the ongoing labour “reforms” is simply “Ease of Doing Business”. The recently passed code on wages, for example, allows a state government to “fix the number of hours of work which shall constitute a normal working day”, without adopting a weekly limit on working hours. The earlier Minimum Wages (Central) Rules, 1950, had specified that a normal working week will comprise 48 hours of work.

The consequence of changing these provisions will strip even the formal-economy workers of the rights they previously enjoyed, while depriving informal workers the bargaining power to negotiate their working hours and wages. The culmination of such a draconian wage code is several states are issuing ordinances to extend working hours.

It is in this context that we must place the plight of informal labourers during the lockdown. The government’s post-lockdown directives, like many of the aforementioned acts, have honest intentions, at least on paper: for instance, a Ministry of Home Affairs  order dated 29 March categorically states that wages must be paid to all workers. It should be noted that this order was issued five days after the lockdown announcement, true to the history of insensitivity  shown towards informal labourers. Several states asked employers to ensure the needs of workers were met.

However, in an environment marked by unequal power relations, widespread governmental apathy, and insufficient infrastructure, miracles cannot be expected. In many states, even if they had wanted to carry out this task, there was almost no data to rely upon due to loopholes in different acts and its incapacitated implementation thus far.

From workers walking for days to reach home to the long queues for a single meal, the Covid-19 crisis has reiterated the perilous situation of informal workers. Neither their rights as labour nor their rights to state welfare are adequately addressed by the existing approach. Only a radically-altered development model, which addresses the conditions that foment informalisation, can ameliorate these conditions. These would include significant investment in agriculture, ensuring stable livelihoods in the villages to prevent the hunt for precarious jobs by the rural masses; formulating new state policies that address the increased dependence on metropolises; increasing state capacity to implement existing laws covering the informal sector.

But all these measures would require the principle of equity as a guiding force of state policy. Unfortunately, the opposite has been the case. Several states have issued ordinances to weaken existing labour laws, thereby deepening the precarious existence of informal labourers. The task at hand, therefore, is a political one. As this crisis prolongs and the state turns a blind eye to the suffering of workers, forces aligned with labour have no option but to take up this task.

First published in Newsclick.
Balu Sunilraj and Jenny Sulfath are senior researchers at the Centre for Equity Studies, New Delhi. Views are personal. 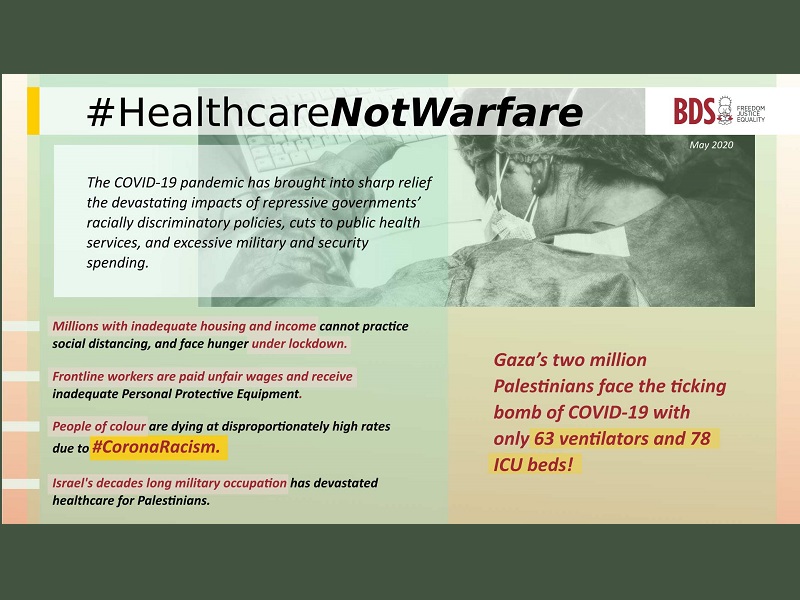