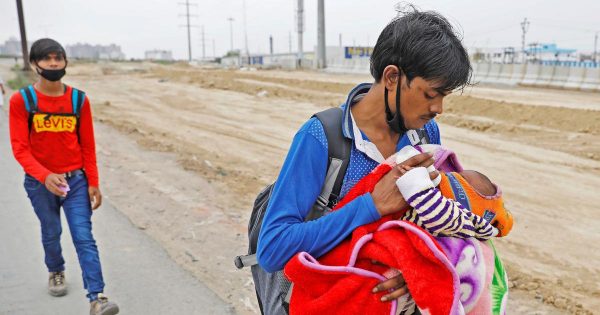 Was the lockdown planned keeping in mind that two-thirds of our country’s population find it very difficult to survive even in an unlocked state? Our farmers, tillers and millers, labourers, daily-wagers, small-time traders and shopkeepers remain alive only on the basis on their daily earnings. If that is snatched from them, they cannot go on for long. No—they cannot be kept alive on “breaking news” bulletins about the relief packages that are about to reach them.

Our people are dying not just of contracting Covid-19, the disease caused by the Novel Coronavirus, but because of lack of food, water, empathy and proper planning. The fact is we are becoming far too thick-skinned to react to our mazdoors slowly dying. We members of the middle class are becoming just too selfish. Every day I hear upper-middle class people say that they are getting all they need so the lockdown poses no problem. But there is a problem: it is this wretched mode of thinking among those who have never been exposed to hunger. Even the feature films made in recent years barely focus on the plight of the mazdoor and the farmers and the migrant workers.

Many years ago, a former bureaucrat, Parvez Dewan, had researched Bollywood films and television serials for how they portrayed different communities and sections of society.

His findings were a real shocker. The visual media’s stereotypes were landing very far from the ground reality and its dark truths. For instance the visual media projected an all-is-well scenario in villages, with rural people happily dancing around rivulets or waterfalls. This is the sort of projection that the Indian media regularly makes, even in these days, despite clear signs of the tremendous crisis workers are facing.

Mind you, with this suffering of our migrant workers, and the death of many of them, the very roots of heritage and civilisation could be shaken. After all, rural India is the real India, which has witnessed the various stages of our history and culture and at their core represent a deep form of Indian-ness. Perhaps it would be relevant to mention that our leading artist, MF Husain, understood our rural people’s grounded wisdom and the basic culture of the land that was ingrained in them throughout their lives.

I had interviewed Husain years ago, and he had told of his plans to make a film on the “subtle comedy-culture of India”. He had thought that the target audience for his this film would only—only—be the urban rich and upper middle class residing in the big cities and metropolitans, and not the rural folk. His rationale was his conviction that 80% of rural Indians are aware of and can appreciate the different aspects of Indian culture, because it is a part of their everyday life. In a sense, this understanding comes naturally to them, Husain had told me. He also felt that it is the elite who live in big cities who are ignorant of India’s ground realities and so needed to be shown the film.

Of course, I had countered Husain’s view, asking him how those who are battling to barely survive can even think of culture! He explained that our rural people are far more advanced culturally. They do not have to get admission in schools and formal training centres to learn our arts and crafts and the traditional arts.

What I am trying to put across is the fact that with the way we are treating our workforce, we are trampling upon our vast culture. Their death and suffering is connected to the perishing of so many other lived realities. Perhaps all our majboor mazdoors would gather the strength to utter these two lines Sahir Ludhianvi’s, tucked in the pages of Anthems of Resistance by Ali Husain Mir and Raza Mir.

“If there is a reason for my angry songs, it is this/ That when I see the hungry farmers/ The poor, the oppressed, the destitute, the helpless/ My heart cannot participate in assemblies of pleasure/ Even if I wish, I cannot write dreamy songs of love.”

During this lockdown, do think of our formally-imprisoned:

It is the least we can do to think of all those who are formally imprisoned in the jails of the country. Nearly 75% of the country’s imprisoned population comprises of under-trials, people who are yet to be proven guilty.

In these Covid-ridden times, open prisons should come up as swiftly as possible. Also, the under-trials must be dealt with as compassionately as legally possible.

During the course of an interview with Giani Zail Singh, the seventh President of India, I asked how he had coped with his time in prison during the country’s struggle for independence. As always, he came up with the most uncomplicated of answers. He said he never left walking, not even in prison. If the prison authorities did not let him out for a stroll, he walked around in his prison cell “Walking kept me alive,” he told me.

On 3 May, World Press Freedom Day:

The sedition charges slapped against the well-known author-publisher, Dr Zafarul Islam Khan, proves how free the press is. Of all things, sedition charges have been slapped on him, on the basis of a single tweet. Zafarul Islam has written several significant books, published many leading authors and edits a journal, The Milli Gazette, whose print edition was closed at the start of 2017 and is now an online journal.

A scholar of repute himself, his father, the almost 100-year-old Maulana Wahiduddin Khan, is a known authority on Islamic teachings. I recall during one interview with him on an Eid evening, that I noticed that there was only vegetarian fare at the table. He told me: “Because I am vegetarian by choice.”

Researchers, scholars, academics, seekers and students would come to his home very regularly to seek knowledge. Now that he is very old, I am not too sure he would be able to keep pace with the changing scenario.