Speaking Up
Long queues at liquor vends is no laughing matter
May 11, 2020 Rajeev Khanna 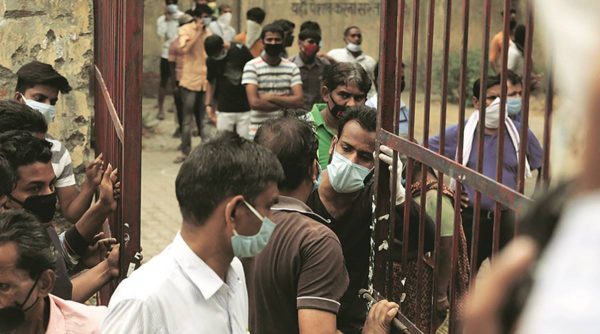 At the same time the people queuing up are being ridiculed, made fun of and have become the butt of sarcasm. Women who have dared queue up for alcohol are most targeted with posts that expose the deep rooted prejudice characteristic of a patriarchal mindset.

But what is being missed in this entire discourse is the grim reality of alcohol dependence in society. Desperate people who are dependent on alcohol as a substance need understanding and a compassionate approach.

There have been disturbing pictures of people braving a hailstorm in Nainital to procure alcohol, people recording and sharing videos of women lining up outside liquor vends in several cities while making vulgar comments, and people being thrashed by the police. People are facing this as alcohol is a dire necessity for many, an essential commodity to survive.

Experts dealing with alcohol addiction point out that the governments never considered alcohol and even tobacco dependence as an issue to be factored into the stringent lockdown. These two are legally available substances on which a large number of people are dependent.

“It has also been proved that the governments are dependent on alcohol sales as a prime source of revenue and have had to fall back on it. The definition of an addict is different for different persons,” pointed out an expert who did not wish his identity to be revealed.

“The issue has several dimensions. The government has no policy on legal substance abuse like alcohol and tobacco. It needs to be understood that alcohol consumption is a life and death issue for those dependent on it. It is a biological need for many including women. The lockdown period has seen calls at rehabilitation centres going up manifold with people asking for admission of their wards and family members to manage their withdrawals. The rehab centres did not take in people because of the COVID19 scare. It needs to be understood that getting a person to quit alcohol and manage his withdrawal is usually done under medical supervision and here we have had people left on their own,” Jyoti Sharma, a resource person at Regional Resource Training Centre at Dharamshala pointed out. This is a nodal facility for capacity building on tackling the menace of substance abuse.

She further said, “The problem of alcohol dependence gets magnified at a time when people have nothing to do. Then there is also the issue of domestic violence going up. As a community we do not have any answer to the problems of a person dependent on alcohol. There is no physical or psychological support available to him or her in the lockdown scenario. There has to be a policy intervention for such people in these abnormal times.”

The number of Indians dependent on alcohol are very high according to a study entitled Magnitude of Substance Use in India 2019 carried out by All Indian Institute of Medical Sciences (AIIMS) for the Union Ministry of Social Justice and Empowerment. This was the first macro level survey carried out countrywide and outlined a stark and grim picture.

The report stated, “Alcohol is the most common psychoactive substance used by Indians. Nationally, about 14.6% of the population (between 10 and 75 year of age) uses alcohol. In terms of absolute numbers, there are about 16 crore persons who consume alcohol in the country.”

Among alcohol users, country liquor or ‘desi sharab’ (about 30%) and spirits or Indian Made Foreign Liquor (about 30%) are the predominantly consumed beverages.

The report further stated, “About 5.2% of the population (more than 5.7 crore individuals) is affected by harmful or dependent alcohol use and need help for their alcohol use problems. Nearly one in five alcohol user suffers from alcohol dependence and needs urgent treatment.” It was also found that majority of the consumers prefer high concentration products.

Sources point out that the long queues and chaos at liquor vends are indicative of dependents wanting to procure alcohol at the earliest fearing a total shutdown again and also the possibility of rates going up. There has been no let down in the number of people queuing up outside vends despite states imposing fresh cess on liquor sales.

Experts are once again praising Kerala government for the manner it has managed alcohol sales.

It is being pointed that taking a moral stand on shutting liquor sales in a pandemic serves no purpose because for dependents it is as necessary as the food they eat daily.