Speaking Up
Locked-down with blood on the tracks
May 11, 2020 Pratishtha Pandya / PARI 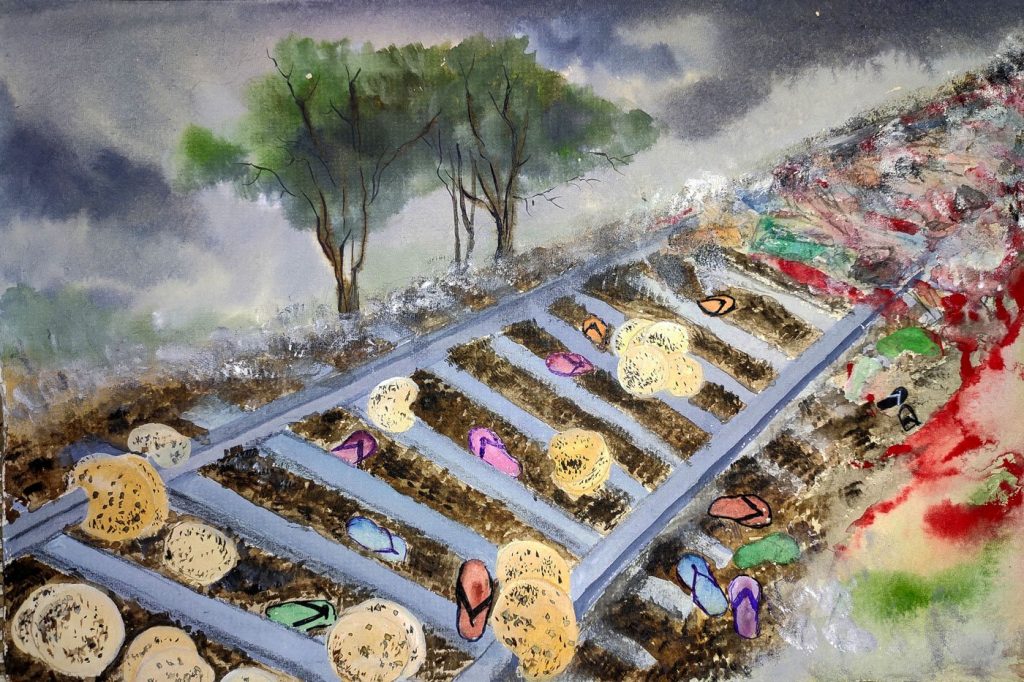 “Holy Smoke!” she exclaimed, putting her cup of morning filter coffee down. Holding her phone with both her hands now, she read it aloud for her husband, who was busy with his office email: “16 migrant workers run over by goods train near Aurangabad in Maharashtra – did you see this? What the hell is going on?” It was another minute before numbness took over and the coffee was cool enough to be taken in small gulps with the rest of the story. “Gosh! How many of these people – and where all they come from?” The surprise in her voice this time was more subdued than before.

“Part of this lot they say was from Umaria. Did we not go to this place last December, Manu?” The mention of that vacation made him look up briefly and humour her before going back to the wretched emails. “Yes,” he said. “Bandharvgarh National Park. In one of the most backward districts in the state of Madhya Pradesh. No wonder those guys came all the way to Jalna looking for work. But to sleep on the tracks? How ridiculous could they get?”

“Oh, it was so beautiful,” she seemed to be back on another planet, “remember Shesh Shaiya? That magnificent statue of Vishnu and the quiet spring surrounded by lush green sal forests… we must go there again once this lockdown ends…” 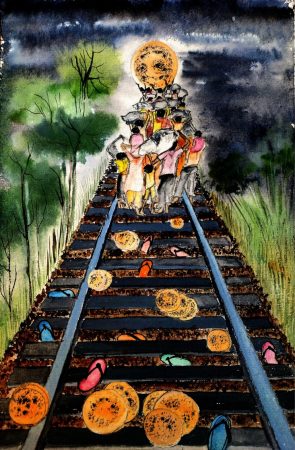 Paintings by Labani Jangi, a 2020 PARI Fellow and a self-taught painter doing her PhD on labour migrations at the Centre for Studies in Social Sciences, Kolkata | Image courtesy Namita Waikar / People's Archive of Rural India

Who exiled them?
Who closed the doors behind them?
Who left them to wander from place to place?
Who took away their livelihoods?
Who placed obstacles on the roads?
Who put them under house arrest?
Who returned them
their forgotten dreams again?
Who added sizzling sighs
to the hungry fire in their bellies?

Who choked their parched throats
with some moist memory?
Home, courtyard, village,
the edge of the farm and
the sweet voices of the little ones…
Who? Who packed all these
along with those dry rotis
and hot chilly chutney?
Who filled each dry morsel
with drowsy hopes?

I swear, the Sal sleeper
under the railway track
must have done it
invoking the forests at the edge of the village
Otherwise who would be so stupid
to offer them silken mattresses
stuffed with dreams there?
Who would put a curse on
the sixteen brothers of Bandhavgarh
to turn them to stone?

Who would have left
those half-eaten rotis
on the tracks?
Who?

Translated by the author from her original poem in Gujarati.

Audio: Sudhanva Deshpande is an actor and director with Jana Natya Manch, and an editor with LeftWord Books.

Note: The names  of the labourers who died, as published in the Marathi daily, Lokmat:

This article was originally published in People's Archive of Rural India on May 10, 2020.