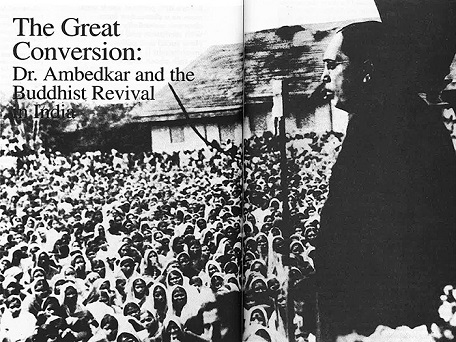 I have borrowed nothing excepting title from Liu Shao Chi, the famous Chinese leader and author of the book ‘How to be a good Communist?’ which converted thousands to Communism. Besides the ‘Communist Manifesto’ and the ‘Das Kapital’ perhaps the Emile Burns ‘What is Marxism’ is perhaps another world famous book which appealed to the educated people and explained Communism and clarified doubts. Sydney Webbs ‘World Communism’ has its own place in the Communist Literature of the world. But for common people I think no other book can surpass Liu Shao Chi’s ‘How to be a good Communist?’

I have travelled through almost all parts of India and wherever I go young men put questions about Buddhism? Why did Baba Saheb Ambedkar choose Buddhism? ‘Can religion be the panacea of ills?’ ‘Why are the young Buddhists in Buddhist countries turning to Communism? What does Buddhism mean to us?’ ‘What must we follow as Buddhists?’ Many more difficult questions are put and repeated at different places. I am not going to answer all or any one of these questions in this paper. I am simply trying to explain, as best as l can, how to be a Buddhist? I am not following the pattern adopted by Liu Shao Chi but putting it in my own manner keeping in view the circumstances in which we are placed in India.

To start with we must clearly understand that Buddha was the greatest religious teacher in the real sense of the word. He was a teacher and not a prophet, messiah, ‘son of god’ or’ ‘incarnation   born to liberate the erring masses’ or ‘to save deteriorating ‘dharma’.  He was not a ‘yogi’ who could create a following by working miracles and curing the sick. He was a teacher of morality and adopted education as his weapon for ameliorating the suffering masses. He did not promise salvation or a comfortable place in heaven nor freedom from rebirth. His teaching was more earthly and easy to understand. The only difficulty was practising his religion. ‘Panch Sheel’, ‘Four Noble Truths’ and ‘Ashtang Marg’ contain the essence of his teachings. You may and may not read the Dhammapada;  you may not be conversant with ‘Tripitaka’;  you may or may not be able to recite thc Suttas in Pali, if you know the meanings of Panch Sheel, understand the significance of Four Noble Truths and follow ‘Eightfold Path’, it is sufficient to make you religious and a ‘man’ in the real sense of the word Buddha wanted man to be a ‘man’ and not merely a ‘biped’ interested only in eating, drinking or procreating.

“Buddha,” to use the words of Tanaka Devi, famous author of ‘Seven Courses of Civilisation’ ‘‘was not a Buddhist; nor for that matter was Christ a Christian and Mohammed a Mohammaden. It was the followers who made them Buddhist, Christian and Mohammedan. In most cases it was the politician and warrior who killed the spirit of religion and began to worship the shell for his own purpose. He exploited religion for his own advantage. Religion gradually became the hand-maid of politician and warrior. It is the ignorant who becomes the most fanatic fighter in defence of religion and political creed. It is at the same time strength and the greatest weakness of any ideology. A small minority of people are seriously interested in religious theory. Majority of the people are never seriously interested in religion or any political theory. They lack the will and the competence to comprehend. Instead of elevating themselves they try to bring the level of the religion down to their feet. What they cannot understand or find difficult to practice they discard. They accept and practice what is easy to comprehend and follow and give them pleasure. Religions which have chalked out an easy path for the masses become more popular than those which demand study, practice, sacrifice and knowledge.

The easiest to follow is Hinduism. To use the words of Eliot, “it is a jungle.” You are free to believe or disbelieve anything. What is required is conformity with rituals and customs, caste and ceremonies and willingness to call him a Hindu. Among the organized religions, Christianity, Judaism and Islam some semblance of discipline is maintained. But majority of the Christians and Muslims do not care for their religions. Like the followers of other religions they also believe that merely following of age old customs is the religion. Most of the troubles have been created by religions and religious leaders themselves. We do not know whether Christ said so or not but Christian books say that ‘no man can enter the kingdom excepting through me.’ Krishna of the Bhagwat Gita said, ‘‘I am God. Come to me and follow and do anything in my name and I shall save you.” He claimed to be God, the saviour.

A good Christian is one who believes in the word of God as embedded in the Bible, has faith in Lord Jesus Christ and accepts him as his saviour. A person may be very moral but if he does not believe in the Bible and does not accept Lord Jesus Christ as his saviour, he is not considered a good Christian. Similarly, a good Mohammedan is one who believes in God as well as in the Koran, accepts Prophet Mohammed as last Prophet sent by God with his message, prays five times a day, visits Mecca. For a Hindu to be a good Hindu there are no commandments to follow and no hard and fast rules. He may be an atheist or agnostic, he may be idolatrous, theist or an iconoclast; he may or may not believe in any book, scripture, religious teaching or philosophy, he can be a Hindu perhaps a good one, too, if he belongs to a caste and follows dictates of his caste. He has to believe in caste system.

On the other hand, a good Buddhist is not one who recites the Suttas correctly, burns candles and joss sticks before the image of the Buddha, goes on pilgrimage to the sacred places like Sarnath, Shravasti, Gaya and Kusinara; bows reverently before the  Bhikshus, occasionally gives ‘Dana’, and sleeps with the satisfaction that he has done his duty towards Dhamma. Buddhism, unlike other religions does not believe in God, his prophets, incarnations, salvation, hell and heaven, redemption and forgiveness, prayers, fasts, sacrifices  meaningless rituals.

Buddhism is not the faith. It is a religion of morality and practice. Buddha at no time claimed to be omniscient nor gave under importance to his own teachings. “Everything changes,” he said, “for change is the law of nature.” He laid down a criterion for judging his teachings. He also laid down certain principles. He exhorted people not to accept anything on faith. His religion was for the good of many and for the good of all. His religion was not the end in itself but only an aid to elevate oneself. Likening the ‘Dhamma’ to a boat, he said that the boat’s place was in water and the purpose was to carry the passengers across the river. He despised those who carried the boat over their heads.

‘Trisharna’, ‘Panch Sheel’ and ‘Ashtang Marg’ were the important pillars of his religious teachings. They are simple to recite but difficult to comprehend and translate into action. Yet they were not the ‘commandments’ but only teaching willingly accepted. Violation was not visited by curses and scourges. Bad deeds, born of evil thoughts led to suffering. Good deeds invariably led to good results. We cannot remove the pain caused by evil deeds nor can we efface the evil effects of sinful deeds. At best we can minimize the effects of evil deeds by doing good deeds in abundance. If each one of us thinks good of our neighbours and do good, the result would be good and happiness all around. Mind not body commands. Mind has to be controlled and cultivated. Mind controls the body. Body does not control the mind. Knowledge alone is not considered enough. It is the right action with right intention which matters most.

A good Buddhist is one who is striving to attain a higher standard of culture, is truthful, honest, upright courageous, compassionate and tolerant. He must have a very high standard of morality. He must try to elevate himself as well as those around him. No man can be truly great in isolation. Buddhism is opposed to individualism. A good Buddhist cannot be selfish. He cannot be dogmatic.  He is a rational person with compassion and loving kindness for all.

One can be a good Buddhist if one reads the books of the Dhamma and ponders over the truth imparted by the Buddha. He must learn to meditate and assimilate the noble teachings of the Buddha. He must earnestly try to translate those noble and lofty principles into everyday life.  He must remain vigilant and not accept everything written in books on faith. He must judge whether it is good for his self as well for the many.

Deeds speak louder than the words. One must always be guarded in his thoughts, deeds and words. When in doubt one should always flash the torch of Dhamma and see whether the particular act would be in accord with the teachings of the Dhamma.

A good Buddhist must always remain vigilant and avoid such acts as are likely to bring bad name to the Dhamma, his teacher Lord Buddha and the Sangha.

Religious societies are judged by their practices and not through their professions.

If we do not keep only the interest of all ‘self’ in mind but work for the betterment and happiness of many, keeping the ideal of removing the suffering of all living beings through service and loving kindness we can make this place a true heaven much better and more real than what the imagination of poets and philosophers have created or presented in their poems and books. This should be the ideal of a good Buddhist. Whoever works for attaining this ideal through right means in accord with the teaching of the Buddha is a really good Buddhist.