Speaking Up
Death, harassment and apathy – there’s a long road before migrants go back home
May 6, 2020 Sabrang India 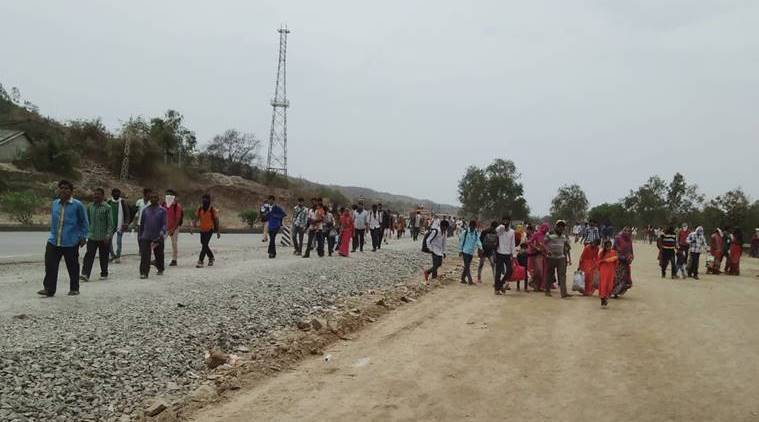 More than 40 days after the lockdown, the government of India finally made arrangements for the return of migrant workers back to their home states. Even then, this process was showing unpreparedness after the Centre charged exorbitant amounts for bus and train tickets from migrants who were surviving on dole outs from the state and civil society. In the 40 days of the lockdown starting March 25, reports of many migrants being harassed, having apathetic treatment being meted out to them and of them passing away as they made desperate attempts to get back home. Migrant deaths have also been reported in road accidents.

And even now, there seems to be no respite for them.

1.       Last Saturday, a bus carrying migrant Odia workers from Surat met with an accident late evening in southern Odisha, killing at least one person and seriously injuring another, reported The Indian Express. The bus was reportedly carrying around 70 passengers and swerved off the road at Kalinga Ghati in Kandhamal district while it was en route to Bhanjanagar in Ganjam district. Around 40 people sustained minor injuries in the incident.

2.       In another incident, a 40-year-old migrant worker, Raju Sahani, suspected to be cycling to his home state, Uttar Pradesh, died on his way near Karjan in Vadodara on Monday. A passerby who found him unconscious on the roadside informed the police who took him to the hospital where was declared brought dead.

The Indian Express reported that the police recovered a bag full of clothes and his cycle from where he was found. A police officer said, “He worked at a private firm in Ankleshwar and had cycled from Ankleshwar till here. But we cannot say for sure whether he was travelling back to his native town all the way to UP or to Vadodara from where trains to UP have commenced.” He added, “We found his Aadhaar card and a bag full of clothes. We have informed his family members. He has a brother who also stays in Ankleshwar. Once he reaches here, we will conduct the postmortem and hand over the body to the family. After the autopsy, we can confirm whether he died of exhaustion or any other reason.”

3.       Ranveer Singh, a migrant worker who decided to walk back 308 kms to his village in Madhya Pradesh from Delhi after he lost his job to Covid-19 there, died on his way home. He had covered 200 kms and was 80 kms short of his destination when he passed away due to a heart attack, reported Gulf News. According to Singh’s family, he had gone to Delhi due to financial obligations. The family had loans that needed to be repaid. In his final phone call with Pinky, Singh said that he was feeling pain in his chest, and wanted to rest. His last words were: "Please come and take me back, if you can."

4.       In April, 29-year-old Gangamma, a construction labourer in Ballari, who was on her way home to Raichur after having covered over 300 kms on foot from Bengaluru, passed away, allegedly due to starvation and negligence at the quarantine shelter, reported The Times of India. While her family alleged the above, doctors at the Vijayanagar Institute of Medical Sciences (VIMS, said she had been suffering from a chronic kidney ailment and hepatitis-B which resulted in her death. Her husband had left before her and reached their home, but Gangamma and others only decided to return once money started running out. She had reached the Ballari border on April 1 by foot and was first stationed in a quarantine shelter at the Ballari border. She fell ill soon after and was taken to VIMS on April 5. Her husband demanded compensation, alleging that the shelter staff didn’t respond to her deteriorating condition in time.

5.       In Jaipur, migrant workers who returned from the bordering districts of Gujarat were facing harassment by locals, The Times of India reported. There have been reports of migrants not been allowed to spend their 14-day quarantine period at home by locals, a problem which is making it difficult for the administration to accommodate people at government facilities. For example, the erstwhile rulers of Bassi town in Chittorgarh hae made arrangements for food, water and other facilities for migrants but they have made a rule not to allow any migrant in until they serve the isolation period at a government school located in an isolated place.

6.       A migrant couple from Uttar Pradesh was evicted by their landlord in Ahmedabad’s Rabari Colony in Amraiwadi, reported The Times of India. Ajaykumar Jatav and his wife Shaku rushed to the district collector’s office in a bid to secure tickets to get back home. They aren’t only worried about completing government procedures but also do not know how they will manage to arrange for their tickets and food. “We worked at a furnace and moulded iron rods. Jointly, we earned Rs. 500 per day to survive. When the lockdown was imposed, we were told not to come to work,” Ajay said. When the landlord came to know they’d lost their jobs, he enquired if they would be able to pay him monthly rent of Rs. 3,000; something which he knew they weren’t in a position to. Seeing this, he warned them to leave his premises and threatened to hurt them in case they didn’t leave. The Jatavs are now trying to wrap their heads around the complicated procedure of registering to get back home.

7.       Locals in Andhra Pradesh’s Srikakulam strongly resisted the entry of the 200 migrants who were brought back home after they were stranded in Tamil Nadu due to the lockdown. “They are all construction workers and fishermen who were held up in Chennai for the last two months. Though many of them belong to the same village, the locals did not allow them to be amidst us, unless they undergo quarantine for two weeks,” Srikakulam collector J Nivas told Hindustan Times.

The authorities did try to explain that the returnees had all tested negative for Covid-19, but the villagers were not convinced. The arguments led to clashes and the police had to resort to lathicharge to disperse the angry villagers. The Srikakulam people had probably become cautious after the first three cases appeared there on April 25. However, the situation was resolved soon and the migrants were allowed to quarantine in a local school.

8.       Vavilapalli Lakshmi, a maid servant, who had gone to her relatives’ place in Raighad on March 22 and got stuck there because of the sudden announcement of lockdown, suffered the same fate as other migrants returning home to Srikakulam. The Hindustan Times reported that she started on foot from Raighad and after four days of marathon walk, she reached her house at Gujarathipet colony in Srikakulam town. However, the villagers didn’t allow her to enter her house though she showed them a medical certificate which said she didn’t have the coronavirus. At the insistence of the villagers, she underwent the Covid-19 test again and tested negative again. Still, they refused her entry and forced her to quarantine for 14 days. The hapless woman took shelter in the gram panchayat office and on Thursday, April 30, the local officials escorted her and left her at her home.