Speaking Up
The night Parbati came home
May 1, 2020 Deborah Grey

Across India, especially in its Eastern parts, the homecoming of goddess Durga is celebrated with much enthusiasm by Bengali Hindus as the annual Durga Puja festival. One of the 108 avatars of the goddess is named Parvati often pronounced Parbati in these parts. So, when 73-year-old Parbati Das came back home from a detention camp in Assam with the assistance of CJP’s Assam team on April 22, her homecoming too was a deeply emotional affair.

Her son Biswanath was at a loss of words and tears won’t stop streaming down his face. Parbati too broke down at the sight of her son as she alighted from the vehicle CJP had arranged to drop her home. But after sometime, Parbati displaying a feistiness much like her namesake goddess and spiritedly denied the charge of being a foreigner. “They called me Bangladeshi and sent me to jail. I was born here in India on land owned by my father. I have never been to Bangladesh and don’t know anything about that country,” says the woman who was forced to live behind bars at the Kokrajhar detention camp.

CJP has been working to help secure the release of detention camp inmates who have completed the requisite amount of time behind bars in line with two Supreme Court orders that allow for their conditional release. The first order passed in May 2019 had stipulated that inmates who had spent three years in a detention camp could be released if they produced two sureties of Rs 1 lakh each. Another SC order issued on April 13, 2020, in wake of the Covid-19 pandemic reduced the amount of time served to 2 years and surety amount to just Rs 5,000/-. 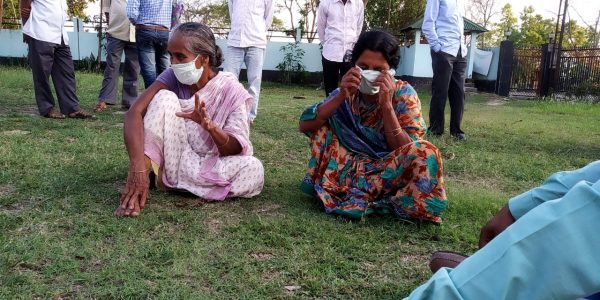 We had first brought to you Parbati’s story when we met her son Biswanath during our tip to Assam in June 2019. At that time, CJP was leading a delegation of eminent lawyers and journalists to Assam to take stock of ground realities. Biswanath who is a rickshaw driver had then told us that her health was deteriorating in the detention camp and he pleaded with us to help with her release saying, “I don’t want her to die in captivity. I want her to be comfortable and loved amidst her family, in her home.” The family belongs to a Scheduled Caste and is extremely economically weak.

A reference was made against Parbati in September 2005 at the Foreigners’ Tribunal at Dhubri. It was transferred in May 2008 to Bongaigaon when a new FT was set up there. Parbati missed the first few hearings, but made it to the FT on July 2, 2008 and submitted her documents. She missed a few other subsequent hearings but her submissions included a copy of her father’s ration card from 1949 and a copy of her father’s name in the electoral rolls of 1970. The Gaon Panchayat secretary had also issued her a link certificate (Gaon Burah certificate) which was also presented to build Parbati’s case. But Parbati was declared foreigner as she could not prove her linkage to her father.

Her father Sharat Chandra Das was considered ‘projected father’ by the FT. This is because of a discrepancy in her grandfather’s name on two different documents. The FT ruled that the Gaon Burah certificates were unreliable and that they do not establish Parbati’s link to her projected father. She was declared a foreigner and sent to the Kokrajhar detention camp. She was also denied bail by the Gauhati High Court.

The CJP team immediately swung into action. Zamser Ali who leads the team in Assam says, “At first we had tried to get her released by filing a review petition against the Gauhati High Court order. Then after she had completed three years behind bars and became eligible for conditional release, we got to work finding sureties to secure her bail.”

CJP Team member Nanda Ghosh and Pranay Tarafdar played a key role in securing the release often running from the Mandal department of the Circle Office to the Sub Divisional Office (Civil) to make sure that the documents of the sureties were properly authenticated. These included the Jamabandi document (proof of land ownership), land valuation document and the tax clearance document.  Ghosh recalls, “In most cases it would take three to four months. But in Parbati Das’s case it took us nine months. This is because we had managed to arrange for sureties once before, but they were rejected at the last minute by the authorities. So we had to get new sureties and start the entire process from the scratch once again.”

But the CJP team’s persistence paid off, and finally on April 22, we were able to complete all formalities and Parbati Das was released along with eight others. Speaking of her ordeal in the camp Parbati says, “My senses had stopped working in there. I missed home.”

Describing the conditions in the camp Parbati said, “There was one room with walls on all sides and one door. They’d give us a rice meal and tea. They didn’t give us blankets at first and then when they did, they were prickly and worn out.”

She also told the CJP team that despite being back at home she had serious concerns about her livelihood. She also has concerns because her son suffers from a developmental disability. CJP is now trying to help the family find a sustainable source of income so that they are not forced to go hungry.

This poor old woman’s ordeal begs the question, what kind of danger did this gray-haired toothless granny pose to anyone? Even if the right-wing supremacist forces peddle the “ghuspethia” or “infiltrator” narrative, are we going to suspect women like Parbati Das of terrorism now, or are we the terrorists striking fear in the hearts of frail old women… forcing them to live, rot away and die in detention camps?

First published in Citizen for Justice and Peace.