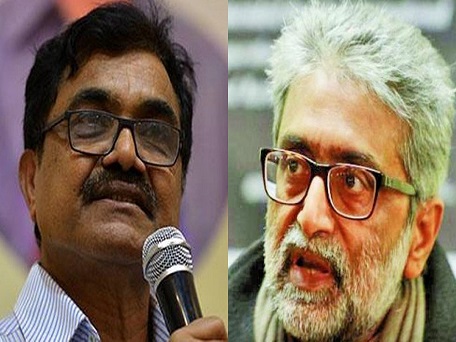 Demanding for the release of activists Anand Teltumbde and Gautam Navlakha, the People's Union for Democratic Rights (PUDR) also called for those of advanced age to be released from prisons across the country.

The organisation’s statement is in light of the recent incident of an officer from the National Investigation Agency testing positive for COVID-19. Teltumbde had spent 11 days at the NIA office prior to the duo’s arrest on April 14, but the agency has denied that he came in contact with the officer in question. Teltumbde did not test positive for the COVID-19 according to a test conducted later.

The PUDR said it was apprehensive about “the high risk in jails and his continuing respiratory ailment. We wish to reiterate that the risks to those lodged in prisons are both very real and with grave consequences. Prof. Anand Teltumbde is 70 years and Mr. Gautam Navlakha is 67 years old. They have both voluntarily surrendered to the investigation. The investigation agency has expressed no desire for further custody for interrogation. Thus no purpose is being served by keeping them in custody at present,” their statement added.

The PUDR mentioned that it has repeatedly spoken about the health risks faced by prison inmates due to COVID-19. “It has demanded provision of bail, irrespective of the nature of the charges, to elderly inmates and those who are suffering from health issues. Jails are recognised to be amongst the most fertile breeding grounds for infectious diseases and the risk to life is obvious for those more vulnerable,” the organisation said.

It also appealed to the Centre and the courts to permit for an interim bail for the activists given the “extraordinary circumstances” and also to those “of advanced age and those with ailments currently lodged in prisons in the country.”

Teltumbde’s lawyers and family have expressed concern for his health. He has health issues which include a respiratory condition.

It has been close to two years that Teltumbde and Navlkaha had been booked in the case and after petitioning courts at all levels, both surrendered before NIA’s offices.

The Supreme Court on March 17 this year rejected their pre-arrest bail pleas and directed them to surrender before the investigating agency. Teltumbde, Navlakha and nine other civil liberties activists have been booked under the stringent provisions of Unlawful Activities Prevention Act (UAPA) for having alleged Maoist links and conspiring to assassinate the Prime Minister.

Both have stoutly denied all charges against them. The apex court while rejecting Teltumbde and Navlakha's bail pleas on March 17, directed them to surrender before the prosecuting agency within a period of three weeks. The duo later sought extension of the time. On April 9, the Supreme Court extended the time by one week by way of last chance.

The activists were booked initially by Pune Police following violence that erupted at Bhima-Koregaon. The police accused the activists of making inflammatory speeches and provocative statements at the Elgar Parishad meet held in Pune on December 31, 2017, which triggered violence the next day.

The police also alleged that these activists were active members of banned Maoist groups. The case was later transferred to NIA. Teltumbde and Navlakha were given interim protection by the Bombay High Court while their pre-arrest bail pleas were being heard. After the high court rejected their applications, they had approached the Supreme Court.