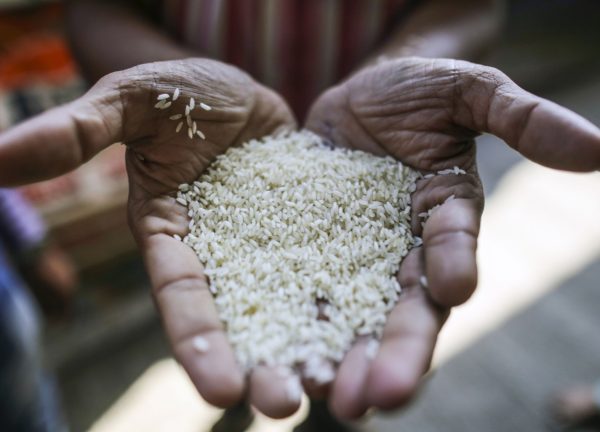 A French princess sometime in the 17th or 18th century was told that the peasants were restless and complaining they had no bread. The princess was said to have uttered the legendary phrase, “Well then, let them eat cake!”. This phrase came to be used to highlight the disregard for the peasants, and lack of understanding of their condition, on the part of the then French aristocracy.

The Indian government’s recent decision to convert the sizeable accumulated stocks of rice into ethanol, for use in production of sanitisers and as bio-fuel added to petrol, betrays an equally cruel and insensitive attitude.

The decision comes as a rude slap in the face of millions of migrant, daily wage, unorganised sector and self-employed workers and other poor who are daily facing dire shortage of food required even for minimum sustenance, apart from other deprivations of adequate shelter, monetary support for basic needs, and protection from COVID-19 disease.

Tall claims by the Centreof having provided for distribution of food grain to these sections are belied every day by reports in the media of numerous stranded and helpless poor eking out a tenuous survival, dependent on handouts and scattered localvoluntary efforts.Many state governments too are failing to set up institutionalised food distribution and other support systems, but all the states are also struggling in the absence of financial support from the Centre and the massive drop in revenues due to the lockdown.

Sitting on stocks while people starve

Numerous experts, civil society organisations and workers associations have repeatedly pleaded with the Centre to release substantial quantities of the food grain held by it either directly or through state governments for distribution through the PDS (public distribution system) without insistence on ration card or any other documentation, and for use in the numerous shelters for migrant workers and other poor throughout the country. This would still have left sufficient foodgrain with the government to meet the requirement of maintaining a reserve of 21 million tonnes.

Unfortunately, the Centre has turned a deaf ear to all these pleas, with the Union Minister for Food and Civil Supplies even claiming that this would reduce reserve stocks kept for emergencies. What bigger emergency could be there than this?And now the government has come to the conclusion that, ignoring the obvious need tofeed the poor using these accumulated stocks, these should be put to use for the even more urgent need for making ethanol as bio-fuel and to make sanitisers, invoking relevant provisions of the National Bio-fuels Policy 2018. Is there really such a need?

No need for bio-fuels now

The Bio-fuels Policy in its various updated versions has been based on the idea of reducing oil imports and using various renewable sources of biomass to make ethanol for dosing of petrol or to make bio-diesel to mix with diesel fuel, replacing up to 20% of petrol and 5% of diesel, respectively, depending on the kind of biomass used.

International oil prices are at historical lows since 1999, and have risen slightly only because US President Donald Trump made noises about attacking Iranian ships. There is a huge glut of oil internationally, and India has taken some steps to take advantage of this situation to bolster its oil reserves.

The lockdown has severely shrunk the use of fuel, especially petrol used in passenger vehicles, which are hardly being used anywhere in the country, and even diesel use being low with public bus transport being shut down and a major proportion of trucks off the roads due to lockdown restrictions as implemented on the ground, regardless of exemption announcements by the Centre.

In this context of extremely low demand for petrol, which is available in plenty and at low prices, where is the requirement or urgency for dosing with bio-ethanol?

Enough ethanol for sanitisers too

It should be noted that historically India has had enormous problems sourcing bio-ethanol, hitherto mainly from molasses obtained as a by-product in the sugar industry based on sugarcane. India produces around 2,500-3,000 million litres of ethanol annually, usually used in roughly equal proportions by the liquor industry and chemical industries making non-potable products.

Far from coming anywhere near the aspirational target of 20% dosing of petrol, India has failed to reach even the originally-set target of 5% ethanol-blended petrol (EBP), largely due to non-availability of any “surplus” ethanol after off-take as above.As a result, India has often even imported ethanol from Brazil. It could do so even now, if really required.

Under the lockdown, all liquor distilleries and retail vends are completely shut. So there is no utilisation of ethanol by the liquor industry. So much so, that government has persuaded some distilleries to manufacture sanitisers. At the same time, almost all chemical industries are shut, too, under lockdown provisions. Therefore, there is plenty of ethanol in stock with both the potable and non-potable alcohol industries, which are not likely to resume full-scale operations for several months more.

Back of the envelope estimates indicate that about 500 million litres of ethanol would be available today for manufacture of sanitisers, and fresh ethanol would become available from the next sugarcane crushing season starting October 2020. At 70% ethanol used in sanitisers, about 700 million litres of sanitisers could be made using these stocks! Is there really a need to use precious rice for this purpose?

Land for food, not for fuel

On the defensive over this issue, government sources are claiming they are within their rights, and have done nothing illegal, in deciding to use rice stocks to make bio-ethanol, since there is provision to do so under the National Bio-fuels Policy 2018.

The decision to do so was undoubtedly taken by the National Bio-fuels Coordination Committee (NBCC), as required. While the main issue here is not the legality of the move but the gross unethical nature of the decision, there are some issues of propriety, too, and whether the government is being too clever by half in interpreting the intent and provisions of the Bio-fuels Policy.

In the first place, it needs to be emphasised that the thrust of the Bio-fuels Policy is to use non-food biomass whereas the provision to use “surplus” food grain under special circumstances was inserted much later as an afterthought. This position has also been ardently advocated by the United Nations Food & Agriculture Organisation (FAO), which has long opposed production of ethanol from food grain under the slogan “land for food, not land for fuel.”

Para 3.1.ii under Definitions states that renewable resources for production of bio-ethanol are “biodegradable fraction of products, wastes and residues from agriculture, forestry, tree based oil other non-edible oils and related industries as well as the biodegradable fraction of industrial and municipal wastes.” Para 3.2 further defines possible resources as derivatives of sugarcane, beetroot, sorghum, and starch-containing materials such as corn, cassava and rotten potatoes. No mention of rice here. Even advanced or second-generation bio-fuels are defined (Para 3.2.iii) as “non food crops” and lingo-cellulosic feedstocks that “do not compete with food crops for land use.”

The 2018 Policy,however,allows the government to use some food grain to make bio-ethanol, under the shelter of Para 2.2(c) which allows for “developing new feed stock for bio-fuels,” under specific conditions.

While earlier the policy allowed use of only “non food feed stock,” the new provision was introduced into the 2018 version of the policy which permits using food grain “during surplus phase” (Para 5.2) and Para 5.3 which states that “during an agriculture crop year when there is projected over supply of food grains as anticipated by the Ministry of Agriculture & Farmers Welfare, the policy will allow conversion of these surplus quantities of food grains to ethanol, based on the approval of National Bio-fuel Coordination Committee.”

The question today is, has the Ministry of Agriculture declared that 2020 is a year with “projected over supply of food grains?” Especially since harvesting, related transport and other arrangements have been badly disrupted, whatever be the crop production or area under cultivation? And surely, such an important decision as use of stock of rice to make bio-ethanol, the first time ever that such a decision has been made, that too in the midst of a raging epidemic and lockdown measures that have placed millions in a precarious condition, should have been made by the Union Cabinet, which would take all factors into consideration, rather than by a Bio-fuels Committee, which is only interested in producing ethanol by any means and at any cost.

In any case, at this critical time in the country’s history, the issue is more than legal, it is ethical. People of this country need food. Converting it into ethanol under the nose of hungry people is callous, cruel and unconscionable. If the government thinks the Indian people are not in need of rice, let them at least export it to regions that need it, and the millions of refugees around the world, including in India’s neighbourhood. To convert rice stocks into bio-fuel that India does not need now, or into sanitisers for which alternative feed stock is either available or can be found, is sheer criminality.