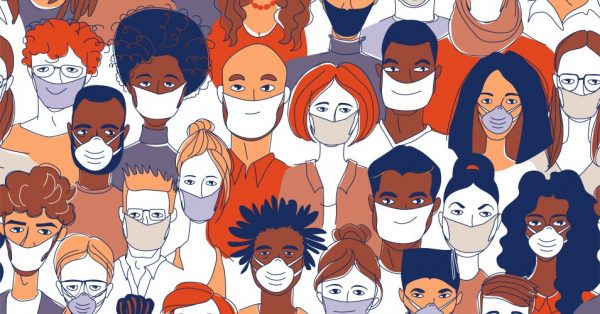 Many leaders and politicians have declared that the COVID-19 (coronavirus) does not distinguish between religions, classes or identities. But this is at best a partial claim. While the virus may not be discriminatory, the political and social societies are.

Data from official releases from the US Centers for Disease Control and Prevention show that the minorities and people of low socioeconomic status like the Latinos and African Americans have a much higher death rate than white Americans.

In Chicago for example, 60% of the dead were African American. (Hamblin, The Atlantic, April 21, 2020) Similarly, the mayor of London, Sadiq Khan writes that in the UK the black, Asian, and minority communities-BAME- are disproportionately affected and though they make up only 14% of the population, they account for one third of the critically ill of coronavirus patients.

Forty percent of doctors, 20% nurses and 67% of the social care force in the UK are from the BAME community and more at risk. Again the reason for disproportionate deaths here is primarily on account of socioeconomic disparities. (The Guardian, 19 April, 2020). Other side factors are also at play, however I argue that genetics is minor compared to social Darwinism.

Again, data from Italy showed that 43% of people who were tested positive with the virus had no symptoms, while others had very severe symptoms and still others had organ failure. The difference was immunity – linked to vulnerability of immune systems that depended primarily on socioeconomic deprivations, old age and other vulnerabilities.

Such data on the correlation of illness to socioeconomic deprivations and minority marginalisation, with a gender dimension would probably be much higher in India and the Third World (if and when the data is made available- which most the Global South is known to fudge).

The point is clear: the virus like other diseases spreads in line with the constructed social and political systems based on deep social cleavages. The outcomes and impact therefore are largely discriminatory. This is not to say that the 40% of the upper strata remain immune to contracting such diseases from the ‘others’ who form the arch of essential services that society rests on.

It needs to be emphasised that this co-relation between communicable diseases and vulnerable population is not new. Public health specialists have argued this for ages but have been ignored and the university departments dealing with such analysis shut in the wave of neo liberal policies. For example, Dr Vittorio Agnoletto MD, Professor of Medicine at the University of Milan, Italy, made a compelling argument on public health recalling the ‘Glasgow Effect’ where research shows that two areas within Glasgow (UK) called Lenzie and Calton are 10 mile apart.

However, the life expectancy between these two areas differs by 30 years. Those living in a poor neighbourhood are prone to die 30 years earlier than those living in a gated residential colony. I am sure you could find such matching correlative figures between let’s say Okhla and Friends Colony in Delhi.

A related major issue is the control of drugs by big pharmaceutical multinationals. Many essential drugs are commercialised and far too expensive. This trend is likely to increase since the World Trade Organization aims to extend patents rights for companies to twenty years under TRIPS- Trade Related Aspects of Intellectual Property Rights. Clearly if there is no paradigm shift from such thinking to alternate ways the world will see many more such catastrophes.

Public health specialists from Dr. Agnoletto in Milan, Dr. Srinath Reddy, Dr. Mohan Rao in India and others strongly critiqued the privatization of health showing evidence from Europe to Asia that health system with long public institutional basis were devastated since the 1980s restructuring. And this process continues till the day before Covid-19 started taking lives and locked down the world.

The answer that public health specialists along with civil society organizations propose is the universalization of health care. They have shown that the World Bank proposed basic insurance schemes that many governments are adopting primarily transfers money to private medical care but does little for the vulnerable. The response of many governments during Covid 19, perforce has been to expand health care for all. This emergency measure should be put into place permanently.

Further the patents on life serving drugs should be removed. Pharmaceuticals need to share this knowledge as social commons. The pharma profits may take longer to set in, but will not decrease.

In the Covid crises we see the consequences of the appropriation of the human body for private profit. This is a virus of nature, of bodies of society, of state structures and power. It has to dealt with holistically and with international public conversation. Keeping it within silos, will be repeating the tragedy as a farce.

First published on April 24, 2020 in The Citizen.
Anuradha Chenoy is a well known academic, and a former professor at the Jawaharlal Nehru University, New Delhi.