Speaking Up
Amid lockdown, Muslims in Lucknow face a Ramzan like never before
April 28, 2020 Abdul Alim Jafri 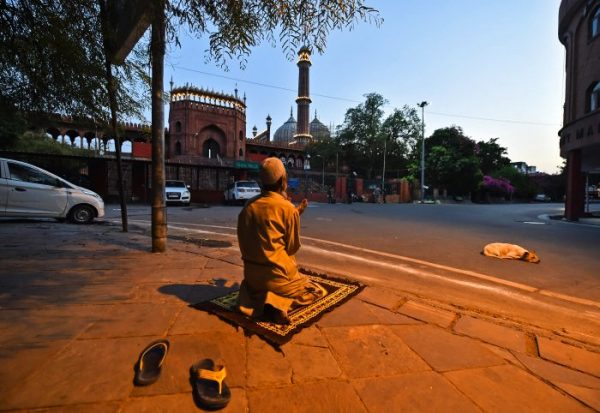 The holy month of Ramzan began in Uttar Pradesh on Saturday with the sighting of the new moon amid stringent nationwide lockdown to prevent the spread of coronavirus.

Every year, the sighting of the Ramzan moon brings endless moments of joy and happiness for Muslims, as this is the holiest month for them, in which they refrain from eating and drinking from dawn to dusk for 30 days. At the crack of dawn, people gather for ‘sehri’ and eat together before beginning the fast. As the sun sets, preparations are made for iftar, when the community gets together after breaking the roza, and head to mosques to perform the special ''taraweeh'' prayers.

This year, however, there is a lockdown across the country, and the community has been asked to not go to the mosques but stay at home and follow the rituals.

A Different Ramzan This Year

With strict curfew and physical distancing directives enforced to limit the spread of the highly contagious COVID-19 disease, most of the Ramzan rituals and traditions will be curtailed this year. The festive spirit has brought along with it a sense of gloom, too, especially for those who used to make annual earnings at this time of the year.

"The hand-to-mouth group of people, whose survival depends on daily income, are suffering the most. The beauty of Ramzan is that every mosque used to arrange for iftar for the poor and needy, but this time this won't be possible due to the lockdown," Nazeer Malik, a veteran journalist based in Siddharthnagar, told Newclick.

Malik said that the mornings and evenings in the local markets, which usually used to be vibrant with all kinds of  goods and delicacies, have fallen silent and wear a deserted look.

On Saturday, the Ministry of Home Affairs (MHA), issued a clarification on its Friday order allowing the opening of shops amidst the coronavirus-induced lockdown in the country, but the District Magistrate of Lucknow, Abhishek Prakash, told reporters that there will be no relaxation in the guidelines in Lucknow. "The system which has been followed so far, will continue to be followed," he added.

Abdul Hafiz Gandhi, a Muslim scholar and assistant professor of law at Unity Degree College, Lucknow, said: "COVID-19 has changed many things. Religious activities cannot remain unaffected by it. This year’s Ramzan will be special in the sense that due to the lockdown and physical distancing, people have to avoid mass gathering in mosques,” adding the Muslim community had taken a wise decision to carry out all religious activities from the confines of homes.

“This is essential to contain the spread of COVID-19. But, it will surely affect the poor populace who used to get food and other help from well to do Muslims. I suppose Muslims would find some innovative ways in collaboration with district administration to help the poor during Ramzan,” he added.

Mohammad Arif, a native of Paina village in Deoria district, who used to arrange iftar for passers-by, poor and needy at the local mosque, with the help of others every year, was a disappointed man. "We are distributing ration and other essential commodities to poor people over the past few weeks, but unfortunately what we used to do during Ramzan will not be possible this year. Yet we are making sure that nobody goes without sehri and iftar,” he added.

Several people NewsClick spoke to welcomed the MHA's decision to reopen the shops for rozedars (the ones who are fasting) saying that it was a major relief but they also complained that most of the shops remained closed in Muslim majority areas, claiming that the  police was not allowing them to even buy essential commodities.

Speaking on the impact on the poor, Tanveer Tyagi, a social activist based in Muzaffarnagar, told NewsClick: "I worry for the poor people as whatever they had earned, is now being spent now on food. I came across several poor people in my district who eating 'chokar ki roti' (wheat bran). We along with many village heads are helping such poor people during Ramzan but the labour class Muslims are apprehensive about how will they sustain themselves for 30 days."

Meanwhile, Maulana Khalid Rasheed, chairman of Islamic Centre of India Firangi Mahal, has suggested that the money that would have been used to organise an iftar, could be used to buy food for those in need.

Umam Khanam, a law student, said that coronavirus had turned the world into a cage. "Just like every year, we were waiting for this auspicious month. But, this Ramzan will be a very different one, something we have never witnessed. Some people are not as privileged as we are, they don't have the basic necessities. It's our duty to help those who are in dire need," he said.

Ever since the lockdown was announced, there has been a huge impact on trade, as vehicle movement has been reduced and delivery of the essential items has been hit.

During Ramzan when all markets witness massive crowds for either buying or selling dates, dry fruits etc., which are consumed at the time of breaking the daily fast, have ground to a halt due to the lockdown and social distancing.

On the impact off the lockdown on the wholesale markets, Babu Atiq, president of Dubagga Mandi Association in Lucknow, told Newsclick that: "Dry fruits and dates or anything for the purpose of Ramzan usually come from Arab countries, Iran and Afghanistan, but due to lockdown, nothing has come this year. People are selling whatever that had in their stock."

Another trader in Varanasi told NewsClick that Khari Baoli of Delhi is the epicentre of dry fruits and dates but due to lockdown, goods are not being exported anywhere. "There are thousands of traders of dry fruits and dates in Uttar Pradesh, but due to the lockdown all markets are closed and traders and shopkeepers from other cities are unable to come and buy from us. This is going to break the backbone of traders,” he added.