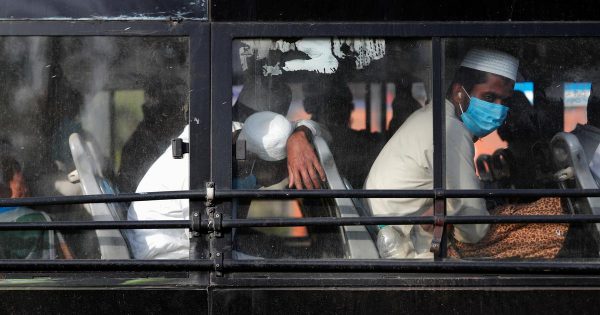 Crises don’t necessarily bring out the best in people. The COVID-19 crisis certainly has not spurred the peddlers of Hindutva to rise above their toxic and obscurantist ideology to participate in the huge task of tiding over what has been billed as the biggest crisis humanity has faced, in a multitude of ways, since World War II.

The central government and two state governments run by the Bharatiya Janata Party (BJP) have taken note of the demonisation of the Muslim community through social media and by other means by the Hindu Right, but have not acted summarily enough to stamp it out. And, so has the international community.

On 2 April, United States ambassador-at-large for religious freedom expressed concern about the communalisation of the pandemic, in the specific context of the hashtag, CoronaJihad, and also said that his office was looking into the scapegoating of religious minorities. Many would be tempted to dismiss the US’s concerns as spurious, given what has been going on there. But it is not so easy to dismiss the World Health Organization (WHO).

Reacting to the Union health ministry’s bulletins detailing state-wise break-up of COVID-19 cases caused by the Tablighi Jamaat congregation in Delhi and its claim made on 5 April that the rate of the spread of the disease had almost been doubled by it, WHO Emergency Programme Director Mike Ryan said the next day at a virtual press conference, “This does not help. Having COVID-19 is not anybody’s fault. Every case is a victim. It is very important that we do not profile the cases on the basis of racial, religious and ethnic lines.”

A group of scientists have also weighed in. Calling themselves Indian Scientists’ Response to COVID-19, it has pointed out that available data do not, in the first place, support the supposition that the primary blame for the spread of the disease rests with the Tablighi Jamaat congregation, however irresponsible and misconceived it might have been. It has condemned profiling, citing a health ministry document that says: “Do not label any community or area for the spread of COVID-19.” The argument is not overly complicated. The group says the government has not released data on what percentage of the congregation has been tested in relation to the proportion of the percentage of the entire population tested. In any case, given the extremely low rate of testing in India, the spread of the disease is believed to be much larger than statistics suggest. It is entirely invidious, thus, to make comparisons and get down to bare-knuckle victim-shaming. It is extremely unfortunate that media organisations have whole-heartedly participated in this exercise.

The observable outcome of such profiling and an online disinformation and hate campaigns run by Hindutva peddlers and their proxies has been attacks on Muslims, in various parts of the country, and their stigmatisation as witting carriers of the disease—Corona jihadists, to use the far from felicific coinage of rabid fanatics.

An incident in two villages near the Delhi-Haryana border represents the core intentions of provocateurs. The Delhi Minority Commission (DMC) has reported to the Delhi Police that the Jats of Harewali and Qutabgarh villages have told the small minority of Muslim families have been told that henceforth “they must live according to Hindu customs, otherwise they will be thrown out…” Clearly, this has nothing to do with COVID-19 and its spread. The epidemic is being used as an excuse to attack the Muslim community and attempt to impose Hindu supremacy.

The DMC has also written to the health minority asking it to stop mentioning the Tablighi Jamaat in its daily briefings. “Such thoughtless classification is feeding into the Islamophobia agenda of the lap media and Hindutva forces…,” it has correctly written.

The government has obliquely taken note of such incidents. On 8 April, the Centre advised against labelling any community or area as transmitters a week after the CoronaJihad hashtag had started trending. The Union health ministry issued an advisory requesting citizens not to ‘spread’ names and identities of those affected.

Amongst the BJP chief ministers, Madhya Pradesh’s Shivraj Singh Chouhan and Karnataka’s BS Yeddyurappa have taken note of such attacks. The latter had issued a warning to those attacking Muslims and ordered strict action against them. No action has, however, been taken either against a close aide of his, MLA Shobha Karandlaje, who had accused Muslims of carrying out ‘Corona jihad’, or his political secretary MLA MP Renukacharya, who had made derogatory comments against Muslims. The messaging has been diluted.

It has been reported that Prime Minister Narendra Modi had at one point urged chief ministers to seek the help of community leaders to fight sectarianism in the context of the pandemic because unity was necessary to fight the spread of the disease. Unfortunately, neither he nor his virtual deputy, Union Home Minister Amit Shah, have felt it necessary to issue a public statement condemning communal attacks and promising condign punishment for those involved in it. This was perhaps more important than exhortations to bang plates or light candles.

In any case, the messaging from the Centre has been vitiated by its own actions. Take, for instance, a letter dated 10 April sent by the Union Home Ministry to the West Bengal government advising “strict action” against lockdown violators in some areas in the state. Let us assume for the sake of argument that people in some parts of West Bengal have been exceptionally recalcitrant in comparison with people in other parts of the country and that the state government has been so extraordinarily lax in policing the lockdown that the Union home ministry had no choice but to butt in. It’s a ludicrous assumption, but still.

It can hardly be a coincidence that of the seven areas mentioned, all in Kolkata, six have large Muslim populations, or that the letter was circulated on social media by BJP leaders and one Union minister of state. This kind of unfounded and leaked allegation sends a more powerful public message than advice supposedly dished out in camera by the prime minister to chief ministers.

Let us take another example. The investigation into the Delhi riots has, the Delhi Police says, continued during the lockdown, though it had stuttered in its early days. Thus, it says, what follows from the investigations—arrests and detentions—will also continue. This was in response to a protest against what has been seen as random arrests, mainly of Muslims. Two students of Jamia Millia Islamia have been picked up by the police since the lockdown: on 1 April and 11 April. Both are activists involved in protests against the Citizenship (Amendment) Act, 2019.

A group of activists and academics have issued a statement saying that at a time when normal exercise of citizens’ rights is not possible, governments must refrain from the abuse of power. Instead, they have written, “…we see open communalisation of this pandemic and targeting of students and activists by the agencies of the State”. It can be presumed that the charge of communalisation has been made, and is credible, for two related reason.

First, a disproportionate number of Muslims have been arrested in connection with the riots. The DMC has protested against this. In a notice to the Delhi Police dated 3 April, it has said that the police have been arresting ‘young Muslim boys by their dozens every single day’ and that these arrests have been continuing after the lockdown. The “trend of randomly arresting young Muslim boys of the north-east district is not acceptable”, it says. DMC chief Zafarul Islam has said, “These are random because a police force would descend on an area in early morning and randomly arrest all Muslim boys in the range of 20-30 years of age.”

Second, the Delhi Police, run by the Union home ministry’s credentials generally and in respect of the riots have not exactly been burnished by their track record. During the riots, on many occasions, its personnel either stood around watching Sangh parivar thugs perpetrate mayhem or actively participated in attacking Muslims, their properties and places of worship. Moreover, for explicable reasons, the prime instigators of the riots, including a BJP leader who contested but lost in the Delhi Assembly elections, are free. Finally, the investigations are being led by two officers whose neutrality can hardly be taken for granted.

In normal times, all this would be “normal”. We have seen time and again that Hindutva thugs have been given a long rope by the Central government and BJP governments in the states, not to hang themselves, but to commit violence against Muslims to the extent of committing murder, especially during the spate of bovine lynching incidents. A culture of impunity has been sedulously cultivated.

But why is the government allowing, and, in fact, strengthening, a regime of sectarian discrimination at a time when the need for discipline and cooperation between the State and all sections of society is paramount? There are, of course, examples of governments headed in directions that run directly counter to the exigencies of the times in the most dangerous possible of ways – in the US and Brazil, for example. Is the intensification of a regime of discrimination in India a similar form of mindlessness?

The answer is no. The government is failing to act adequately against those indulging in violence partly because it is Hindutva’s ideological reflex, but this communalisation also serves to deflect attention from the Central government’s inept and callous handling of the situation, which has left millions of people on the brink. People deprived of livelihood and support are not being rhetorical or hyperbolic when they say that they have been abandoned to starvation.

That the government is persisting with this scorched earth policy is surreal. After the imposition of the first lockdown immediately exposed its enormity, 14 April was an obvious opportunity to reverse course, at the very least in terms of committing to provide working people, especially migrants, work with income or income without the work that is unavailable. Modi chose, however, to deliver vacuous homilies about citizens’ duties. These may distract some of those listening to them in the comfort of their living rooms, but it is unlikely to impress those already destitute or almost there. The protests by migrants in Mumbai and elsewhere are testimony to that. Sectarianism is this regime’s default mode of misdirection.