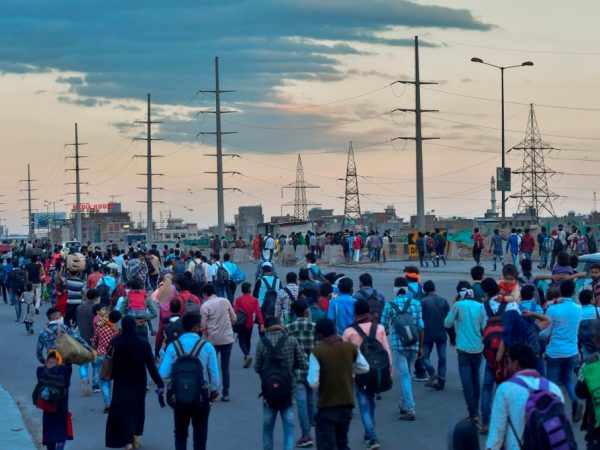 How many policemen in civil clothes are required to deliver a mere summons to an editor of a web journal 700-k away in an age of email and WhatsApp? The recent action of the Uttar Pradesh police, where it sent a posse of 7-8 policemen, in civil clothes, in a black SUV with no number plates, to Siddharth Varadarajan’s residence in Delhi to deliver a summons has prompted this question.

Definitely the police did not bother to ponder over how Varadarajan, editor of The Wire, will present himself to the authorities during a lockdown which has brought trains, flights and even private transport to a standstill.

The manner in which the issue has unfolded has caused an international uproar with 3,500 jurists, scholars, actors, artists and writers condemning Uttar Pradesh Police’s actions against The Wire, and saying that a “medical emergency should not serve as the pretext for the imposition of a de facto political emergency.”

How Chief Minister Yogi Adityanath’s government will respond remains to be seen, but the story in The Wire on the Tablighi Jamaat, which also noted that “Indian believers” responded late to the viral epidemic obviously provoked the powers-that-be into action. The episode has brought into sharp focus the priorities of the government during the epidemic, which it is supposedly fighting a “war” against.

During this lockdown, most political activities stand suspended, and the citizenry are restricted to their homes, but a BJP-ruled government is still chasing one member of the independent press. The Delhi police has brought ignominy on itself by failing to apprehend members of a 200-strong gang which unleashed violence in JNU in January 2020 despite catching their movements on CCTV. Its handling of the north-east Delhi violence, where it is alleged that they did not respond to distress calls from those under attack, is equally lacklustre. Suddenly, the same police has become proactive and arrested two students of Jamia Millia Islamia, Saroofa Zargar, an MPhil student and media manager of the Jamia Coordination committee and Meeran Haider, a PhD student, who is president of the RJD or Rashtriya Janata Dal’s youth wing’s Delhi unit.

A joint statement by teacher’s organisations has called this a “retaliatory revengeful action against those who were active in the movement… on trumped-up charges relating to the North East Delhi riots and other baseless allegations”.

These students were at the forefront of the historic movement to defend constitutional rights, and opposed the CAA and the NRC. Their movement had a massive impact throughout the country. Despite provocations from the police and right-wing elements, the movement stuck with its non-violent path and in the wake of the global Novel Coronavirus pandemic, they peacefully withdrew.

Demanding immediate release of these leaders this joint statement signed by FEDKUTA, DUTA, JNUTA and Jamia Teachers Association JTA as well as AIPWA, IPTA, Janwadi Lekhak Sangh, Jan Sanskriti Manch etc underlined that Safoora Zargar is pregnant and requires proper care and medical supervision.
The timing of the arrest of student leaders/activists and targeting of others is significant.

Remember, this happened exactly when the functioning of the home ministry—which is directly under Shah’s supervision—was increasingly coming under a scanner, including for how the Delhi police has been acting during the last few months.

Or, consider the Markaz event where the Tablighi Jamaat held its programme in Delhi. No doubt, theirs was an unwise decision, but can it be singled out for this and the entire Muslim community targeted for their mistake? What about role of Delhi Police and the Ministry of External Affairs? Should not they be blamed equally? Remember, the TJ could not have held its programme without permission from Delhi Police, which, again, is directly under the Home Ministry.

The Maharashtra government did not allow the TJ to hold its convention in March because of the COVID-19 epidemic. Anil Deshmukh, home minister of Maharashtra pointedly asked why the Union Home Ministry did not act in time. Not a very comforting question for someone who is compared with Sardar Patel by his followers.

The government was also facing flak for being ill-prepared to provide essential supplies during the lockdown which it had suddenly put in place. Besides, Shah has remained tight-lipped about the migrant labourers who fled on foot, by bus or train, for their homes right after it was imposed. Yet, it turns out that the home ministry had no qualms in making special arrangements for the return—in around 30 super-luxury buses—of around 2,000 Gujaratis who were stranded across Uttarakhand in the aftermath of the lockdown. The operation was wrapped in so much secrecy that Uttarakhand’s transport minister was not even aware of it.

Barring cheerleaders, all are being penalised if they hold ideas contrary to the regime. A commitment to speak truth to power and ideals enshrined in the Constitution is proving costly for many. A statement issued by NAPM on the occasion of Ambedkar Jayanti, 14 April, details how governments are using the COVID-19 lockdown for “destroying the democratic institutions and processes, restrict fundamental rights and freedom and criminalise any critique as sedition and anti-national. The federal character of the Indian state is being put under the strain and being eroded constantly.”

It talks about filing of FIRs against Prashant Bhushan, Ashlin Mathew, Kannan Gopinathan and the continued incarceration of peasant leader Akhil Gogoi in Assam, of Dr Kafeel Khan in Uttar Pradesh, of Abhilakh Singh, secretary of Theka Mazdoor Kalyan Samiti in Pantnagar University, teacher Konsam Victor Singh and Dr Laifungbam Debabrata Roy in Manipur, Soneswar Narah and Pranab Doley of Jeepal Krishak Shramik Sangha in Assam and many others arbitrarily arrested for their Facebook posts, WhatsApp forwards and, most importantly, for raising questions over the government actions.

In addition, the government circulated a Cabinet note which has talked of raising the official working hours from 8 to 12 hours a day, defeating the hard-won rights of workers in a single stroke.
Teltumbde’s prophesy on the eve of his arrest is worth pondering over again: “In the name of the ‘nation’, such draconian laws that denude innocent people of their liberties and all constitutional rights are constitutionally validated.

“A jingoist nation and nationalism have been weaponised by the political class to destroy dissent and polarise people. The mass frenzy has accomplished complete de-rationalisation and inversion of meanings… it is with a feeble hope that I write to you at such a grim moment.

“Well, I am off to NIA custody and do not know when I shall be able to talk to you again.

“However, I earnestly hope that you will speak out before your turn comes.”

First published in Newsclick.
Subhash Gatade is an independent journalist. Views are personal.