Speaking Up
Right to Life and the Disaster Management Act of 2005
April 21, 2020 Nandita Rao 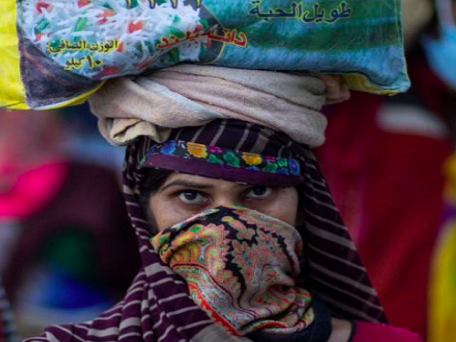 Heart-breaking images of migrants trekking home on foot have hit the world headlines, making us weep for our fellow human beings. To be robbed of dignity is to be denied the protective cover of the Preamble to the Constitution of India to which every Indian can lay claim. The author explains how the lockdown with no preparation for its impact on migrant workers, denies to them the right to livelihoods which make up the essence of the right to life.

IN every law school across the country, probably the first case, our budding lawyers study in their Constitutional Law class is, Olga Tellis & Ors Vs. Bombay Municipal Corporation & Ors  [1985 SCC (3) 545]. By this historic judgment, the Supreme Court held that the right to life under Article 21 guarantees to the citizens of India the right to earn a livelihood and further that the State cannot deprive a citizen of his livelihood except in accordance with a  just and fair procedure established by law.

The relevant portion of the judgment, for its sheer beauty of language and clarity of thought, is reproduced here:

2.2 The principles contained in Articles 39(a) and 41 must be regarded as equally fundamental in the understanding and interpretation of the meaning and content of fundamental rights. If there is an obligation upon the State to secure to the citizens an adequate means of livelihood and the right to work, it would be sheer pedantry to exclude the right to livelihood from the content of the right to life. The State may not, by affirmative action, be compellable to provide adequate means of livelihood or work to the citizens.

But, any person who is  deprived of his right to livelihood except  according  to the just and  fair  procedure established  by  law, can  challenge the  deprivation  as offending the  right to life conferred by Article 21."

One would have assumed, that when the Government of India, under the Disaster Management Act 2005, declared a countrywide lockdown, to pause the COVID-19 global pandemic, the government, would have felt obliged, under the clearly settled law of Olga Tellis, to compensate those whose livelihood would be affected by this lockdown.

However, without notice, choice or any warning, lakhs of people were deprived of their livelihood almost overnight. Many on daily wages, rendered homeless and hungry began walking home to their villages, others insecure about month-end wages, joined this long march to security. This exodus of workers to their villages invited a direction to the state governments to provide them food and shelter, yet no assurance of any kind of compensation was given.  The Supreme Court, when Petitioned, choose to dismiss the petition, with imperious remarks that “ if provided food, what need did people have for a wage?

Such dismissal appears to ignore, the law settled by a Constitutional Bench of the Supreme Court in Olga Tellis,” that, any person who is deprived of his right to livelihood except in accordance with a just and fair procedure established by law can challenge the deprivation as offending the right to life conferred under Article 21.

The court was obliged to test "whether citizens had been deprived of their livelihood in a just and fair manner? and whether the state was obliged under Article 21 of the Constitution of India to pay citizens a compensatory minimum wage, if as a result of directions under the Disaster Management Act, 2005, they were deprived of such livelihood?"

Not only did the Court ignore its obligation to examine the scope of power under the Disaster Management Act so as to ensure it is not ultra-vires the mandate of Article 21, but the Court also did not even examine, whether the procedure established by law, under the Industrial Disputes Act was being enforced for the workers employed in the organized and unorganized Industry.

India is one of the few countries in the world which has not yet announced an economic stimulus package despite having what is being called the biggest countrywide lockdown in the world. The Indian poor, already vulnerable and reeling under decade-high unemployment rates, have no social welfare blanket in the nature of a Universal Basic income or unemployment dole. With the lockdown making compliance with labour laws more or less voluntary as labour courts are shut and lawyers have not been declared an essential service or given passes to travel around, hundreds have been pushed below the poverty line.

Apart from the human suffering of the working class, the fleeing of workers from factories and cities, will also make exit from the lockdown and restarting of industrial activity difficult as has been observed by the recent efforts of the government to urge the industry to begin work. As the economic crisis deepens and there doesn’t seem to be a clear exit strategy from the countrywide lockdown due to growing COVID numbers, one can only hope that the Supreme Court will have another occasion, to test the decision of the government to deprive people of their livelihood without compensation, against the right to life guaranteed under Article 21. As this decision alone will have a long-standing impact not only on the speed of economic recovery but also the depth of human suffering.