Speaking Up
If Agriculture Were the Most Remunerative Economic Activity
April 21, 2020 Varsha Sharma, Sandeep Pandey 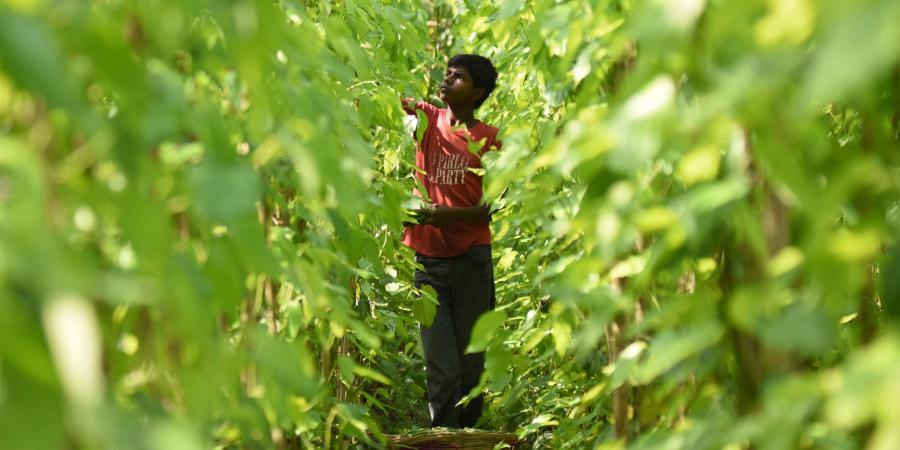 The lockdown following the Novel Coronavirus pandemic has made one thing very clear: food is the single most important need of all human beings. Life can go on without an internet connection or a mobile phone, but not without food. While the economy is totally shut down, the only people who are allowed to freely move about are those deal in food items. For this reason, even other categories of daily-wage earners have started selling vegetables during this period, to ensure they have some source of income.

Community kitchens and food distribution were allowed by state and district administrations, even if it meant that precautions such as always wearing a mask outdoors and maintaining physical distance were thrown to the wind.

In India, half the population is malnourished. The country is at the rock bottom among nations on many counts of nutrition and health. More people could die of starvation in such circumstance during such a lockdown, than from contracting Covid-19, the disease caused by the Novel Coronavirus. We all saw how everybody, whether poor or rich, was busy trying to ensure that food reached those who were facing acute shortages. Never have relief operations been carried out nationally on such a massive scale. Never have people from diverse backgrounds felt so equal. Demands pending for long, such as universalising the Public Distribution System and nationalisation of health services, seem like a possibility now.

An unusual phenomenon, which even caught the government unawares, was that of migrant workers walking back to their homes, sometimes more than a thousand kilometres away. People wanted to be where they belong. The only thing that bound them to the cities they live in, in sub-human conditions, was livelihood. When that connection was snapped in less than a day, the uncertainty that looms over them grew unbearable.

Given these circumstances, the moot question is, what would happen if by a set of policy changes agriculture was to be made the most remunerative activity of the economy? The justification in its favour is simple. If agriculture is the most important activity for human survival why not accord it the highest value?

In any case, more than half the Indian population is still engaged in the agricultural sector. Once such a proposed policy change is introduced, the economy and society will witness major transformations. Most importantly, farmer suicides will end. Second, the nutrition situation would improve immensely.

On a precautionary note, it should be kept in mind that such a policy must be graded and not applied as a blanket rule. Else it will end up favouring only the big land-owners. The policy should be such that income is inversely proportional to the size of a farmer’s land holding. This should be done in such a manner that roughly equal incomes are ensured for farmers. The landless labourers who work on other people’s fields should also have an income not less than the income of the land-owner.

An alternative is for all wages to be provided through the Mahatma Gandhi National Rural Employment Guarantee Act where the word “guarantee” means a minimum 100 man-days of work for all who demand work under its schemes. This is what the law provides for, too, though the bureaucracy interprets 100 days as the “maximum” number of days of work that can be provided.

Another alternative is for all land to be pooled and collectively worked on by people, and the produce equitably divided among families according to the members they have and their needs. Through this we can reduce the burden of production on extremely small patches of land and use agricultural technologies more efficiently. Therefore, land-use reforms are very crucial for greater and quality farm production. The cost of input would be borne by the Gram Panchayat in these cases.

Any hike in food prices because of increased incomes of farmers and labourers should not worry us as the Public Distribution System will continue to provide food security to people who cannot afford to purchase on market prices.

A policy change that privileges agriculture will reverse the flow of migration, taking people from urban to rural areas. This will boost the Indian economy. Further, the quality of life will improve, resulting in the process of “rurbanisation”. Since most jobs in India are in the agricultural sector—half the population depends on it—boosting incomes will become a pull factor for rural areas. Today’s low remuneration has always been a push factor—sending people to urban areas to take up low-income jobs. The problems posed by high levels of migration from villages towards cities has created urban slums with poor standards of living. To an extent, better farm incomes can tackle this problem.

Effective implementation of such a programme will reduce the huge wage disparity that currently prevails in the country. In deciding incomes, Dr Ram Manohar Lohia’s proposal that the difference between the income of the poorest and the richest should be restricted to ten times the lowest wage should be the guiding principle. Similar to the concept of minimum wages, there should be a ceiling on maximum incomes too—so as to ensure this less than ten-fold gap in incomes is not breached. All income above this ceiling should go into a national pool which should be used for the common good.

Uniform development in rural and urban areas would further the very idea of democracy. The rural population would not feel discriminated against. Decentralisation of development would be accompanied by greater democratic power as more educated people, the articulate class, will also start living in villages. The Gram Sabha, the only universal democratic forum, should be the most empowered body which takes the most important decisions. The decisions which have a less significant impact can be left to higher levels of governance. This would be in accordance with the objective of Part IX and the Eleventh Schedule of the Constitution.

When people stop vying for high-salaried jobs in service sector, the cut-throat competition and use of unfair means to access education will end. Education will take its ideal form, as a process of learning. Taking the pressure off students to appear for competitive examinations, for which they resort to coaching institutions, would make citizens feel more at peace with themselves. The focus will shift from learning by rote to more practical learning needed for survival.

While some would argue that this would push India backwards in the race for development, it is important to note that the primary occupation in India has always been agriculture. Our standards of development, therefore, should not be motivated by the Western ideas of development, but derive from a more sustainable vision, adapted to the needs of this country and its people.

However, making agriculture most remunerative vocation will not be enough. It has to be accompanied with more policy changes to create a synergy between the primary (raw material) and the secondary (manufacturing) sectors. There has to be an emphasis on cottage industries and the tertiary (service) sector, so as to guarantee an equal social status to all. People engaged in the service sector should be willing to serve society with little or no remuneration—but enough for survival.

It is clear that career bureaucrats or professionals cannot solve our problems. Humanitarianism must be our guiding principle and not some artificial parameters of performance. This would vastly improve the quality of governance.