Speaking Up
The wretched of India
April 19, 2020 Shambhavi Sidhi 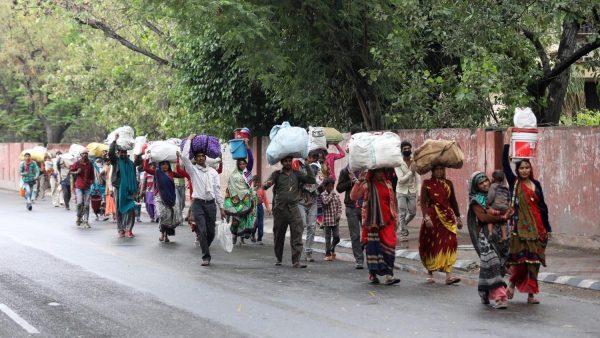 Prime Minister Narendra Modi on Sunday, April 14, announced that country’s lockdown will be extended till 3rd May. All sorts of praises and criticisms followed the announcement. Since then it has been the topic discussion amongst the Indian middle class as they sit in the comfort of their houses, posting pictures of their newly learned skills on social media, a popular trend these days. Another trending quote, which is making rounds on social media, reads, “Coronavirus doesn’t see if you’re rich or poor.”, while the post does make sense when one realizes that celebrities and politicians like Tom Hanks and Boris Johansson (to name two from a much longer list) were diagnosed with COVID-19, the frightening reality that the Indian society has shamelessly denied is the effect of lockdown on the poor and the marginalised.

The flagrant attempts of Indian media to communalise the virus in order to hide news stories related to the sufferings of the poor and marginalised is one of the most inhumane and barbaric acts in the history of electronic media of this country. As upper-class households gear up to stock and hoard commodities and get their WiFis fixed to work from home, the marginalised sections bleakly sit, awaiting help and aid from the government. As if the horrific images of thousands of migrant workers risking their lives and leaving Delhi weren’t enough for this country, now even Mumbai’s migrant workers, after hopelessly waiting for the government to come up with a concrete plan, have decided to leave the city as they don’t see any aid or help to come. And how can we forget to mention the plight of Muslims and Kashmiris as their survival becomes more and more difficult with each passing day; between the virus and the current regime, the latter is more likely to murder them first. The despair of migrant workers and Muslims is only a tiny glimpse into the abyss that hides behind and beside the comfort of upper-class houses. There is one common question that every poor and wretched of this country has on their mind, “What would become of us?”

Arunima is a construction worker in a building in the suburbs of Lucknow. Her family has put up a small tent beside the building, there are six members of her family, all stuffed together in a small tent with minimal resources. Although, Arunima refuses to call it a tent, “this right here, is my home”, she says. Sometimes in the afternoon, she stares ghastly at the building for hours, she remembers how the street resonated with the roaring sound of the backhoe, churning of sand, thak-thak of hammers and other sounds from construction machines. While neighbours of the society frowned at the sound of these machines, Arunima remembers, with tears in her eyes, how her whole life was dependent on these sounds, she says it was music to her ears. She also mentions how a truck with bricks or sand would unload at the end of every week and she remembers how her whole family would clap and rejoice at the sight of it. “A truck at the end of week meant the construction would continue in the coming days too” she mentions in passing. As she walks back into her house with a packet of relief material she has just received, her children come out and hug the relief workers, Arunima folds her hand and tells the relief workers, “you are our truck.”

Right beside Arunima, in a small but well-constructed house of bricks and cement, lives a family of a milkman, “some people have stopped buying milk from us” says the eldest son, Faizan, frowning at the duplex on the corner as he pours milk from one canister to the other. “The households in this area are mostly Hindu, we have never had any problem with them and still don’t” he continues, “but two houses have stopped buying milk from us. As you know, we are Muslims, even though we are not from Tablighi Jamaat these two households simply refuse to understand the difference. The virus wouldn’t have cost us much but the media houses have” Shahrukh blames media houses for the loss their business is suffering. “We have never left this area, we rarely go out of this colony, yet we have to bear the burden, all because of some media houses which spew venom against our community” adds Junaid, the youngest son.

A young girl of 18, Pratima who is also a friend of Arunima’s daughter, used to mow the community park before the lockdown, “my father is a milkman, the grass that I mow from the park, we also use to feed the cattle, but now since the lockdown whenever we go to pick up some grass, a man from that big white house shoos us away as if we were dogs or goats” she says as she points to a four-story manor, which is probably the biggest house in the colony. “I also heard him whisper once that we were a bigger threat than the virus, I don’t know what he meant by that” adds Kanti, Arunima’s daughter who also mows grass with Pratima.

“Had the government prepared properly, we would have left for our villages, it would have been easier there, the fact remains, this is a rich person’s disease, we never travelled abroad, yet we are the worst hit” Pratima’s uncle, Ramchand, who works in the same building as Arunima blames the government and the arbitrary lockdown for their condition. “They think we are stupid and we do not know anything, but we also use Facebook and we know what happened to migrant workers in cities as big as Dilli, I could never imagine travelling back to my village after seeing all that” he gulps a big tear and continues in a trembling voice, “we are not scared of the virus, it will go away, we know, we just want to know how to survive this lockdown.”

COVID-19 continues to spread rapidly in India, and so does despair and hopelessness amongst the poor and marginalised. While we write with the hope that these stories reach the authorities and something is done to ensure a healthy survival of the marginalised communities, the threat that looms on these communities is disseminating fast. The Indian Government remains ignorant and indifferent to their needs and demands as lap media houses continue to communalise COVID-19, or, in a new low, play antakshari on live NEWS TV to keep the man from the big white house and his ilk entertained.