Speaking Up
The ‘Sultana’s Dream’ Project by Chitra Ganesh and the importance of Muslim Feminisms
April 18, 2020 Mara Ahmed 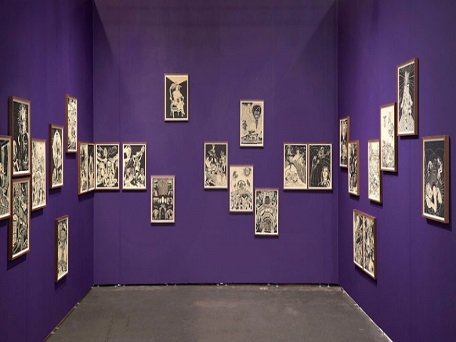 I was fascinated to learn that a new exhibit at the Memorial Art Gallery (MAG), in Rochester, New York, celebrates Rokeya Sakhawat Hossain’s Sultana’s Dream. For those who have not heard of this groundbreaking work, a quick Google search yields this synopsis on Wikipedia:

Sultana’s Dream is a 1905 feminist utopian story written by Rokeya Sakhawat Hossain, a Muslim feminist, writer and social reformer from Bengal. It was published the same year in the Madras-based English periodical The Indian Ladies Magazine. It depicts a feminist utopia (called Ladyland) in which women run everything and men are secluded, in a mirror-image of the traditional practice of purdah. The women are aided by science fiction-esque “electrical” technology which enables laborless farming and flying cars; the women scientists have discovered how to tap solar power and control the weather.

In her 2009 article in The Guardian, ‘What happened to Arab science fiction?’ Nesrine Malik cites Sultana’s Dream as an illustration of science fiction’s subversive potential:

…if there is a sense of despair and censorship, what better way to counter the former and circumvent the latter than engage in flights of fancy and imagination? To vicariously revolutionise and hope via a medium of fantasy? With Arab literature so focused on classical themes, an Orwellian allegory, for instance, would tackle the present and envision a future in a more clandestine fashion than a straightforward political attack.

Sultana’s Dream is an example of such critique. Written in 1905 by a Muslim feminist writer and social reformer who lived in British India, it is one of the earliest examples of feminist science fiction, and is a sort of gender-based Planet of the Apes where the roles are reversed and the men are locked away in a technologically advanced future.

An indictment of the purdah system, it was much more than simplistic utopian thinking but a philosophically mature vision of a world where, following defeat in a crushing war, men succumbed to isolation in exhaustion and disillusionment with a world dominated by brute male force. It was also an extension of the author’s frustration with the limitations imposed upon her by her own society.

For me personally, as a South Asian, Muslim, woman activist, Sultana’s Dream has always been a source of great pride and inspiration. Last year, I wrote about non-European, nonwhite, decolonial feminisms and the importance of reckoning with that history:

I remember when Laila Lalami came to Rochester many years ago to read from her 2005 book, ‘Hope and Other Dangerous Pursuits’. I’d been a fan of her writing since her moorishgirl.com days and so I went. During the Q&A someone asked her a question about how feminism evolved in North Africa by trying to understand its ties to western feminism, because how else would Moroccan women know about their rights? Laila was visibly annoyed and had to take a sip of water before she responded. I never forgot that question – this ridiculous notion that feminism is a western idea.

I’m reading Urdu poet and writer Fahmida Riaz’s book, ‘Four Walls and a Black Veil,’ and in the foreword Aamir Hussein talks about how “poems such as ‘The Laughter of a Woman’ and ‘She is a Woman Impure’ celebrate femininity in ways that French feminist theorists such as Julia Kristeva, Helene Cixous and Luce Irigaray were to do. Just as Ismat Chughtai prefigured by several years Simone de Beauvoir’s theoretical configurations in ‘The Second Sex,’ so too Fahmida wrote fearlessly about blood, milk and the waters of birth before her western contemporaries began to formulate their theories of women’s writing as grounded in bodily experience, and most certainly before she could have been exposed to their writings.”

I read Chughtai’s seminal, semi-autobiographical Terhi Lakeer (The Crooked Line) in English, a translation by Tahira Naqvi, some years ago and was blown away by its power. In her foreword to the English translation, Naqvi writes, “it was Ismat Chughtai who, fearlessly and without reserve, initiated the practice of looking at women’s lives from a psychological standpoint. This brings me to the interesting parallels that one can see between ‘The First Phase’ in The Crooked Line and the section titled ‘The Formative Years: Childhood’ in The Second Sex, Simone de Beauvoir’s pioneering work on female sexuality which appeared in 1949, four years after Chughtai’s novel. As a matter of fact, there are certain portions in Chughtai’s novel that seem to be fictionalised prefigurations of Beauvoir’s description and analysis of childhood playacting and fantasy; it seems as if Chughtai and Beauvoir were drawing on a common source. In both works, feminine experience is explored from childhood through puberty and adolescence to womanhood, these being the stages in the development of a sense of self that finally results in an acceptance of sexual impulses and subsequently leads to the awareness of a sexual identity.”

And of course, we can go back to ‘Sultana’s Dream’ a feminist utopia imagined and articulated by Rokeya Hossain, a writer and social reformer from Bengal.

Rokeya Hossain was born in 1880, Ismat Chughtai in 1915, and Fahmida Riaz in 1946. All three women were Muslim and Brown (South Asian). This is just a small bit of history (literature), so much more can be found in the nonwhite, non-western world. And confining ourselves to what’s written only, is egregiously short-sighted, considering the significance of what is passed down through stories and diverse oral traditions.

Given this context, I was eager to read the description of Chitra Ganesh’s art exhibit ‘Sultana’s Dream’ at MAG. It is a collection of prints, black linocuts on tan paper, which utilize Rokeya Hossain’s text and imagery in order to engage contemporary politics.

What stunned me in the discourse I encountered online was the complete erasure of Rokeya Hossain’s identity as a Muslim woman. There is no mention of her religion, whereas the artist, Chitra Ganesh, is explicitly described as being ‘born and raised in a Hindu Indian immigrant family in Brooklyn and Queens.’

This erasure is particularly painful and symbolic at a time when Islam is strategically advertised as misogynistic and Muslim women stereotyped as submissive and in need of ‘saving.’ Invisibilizing Muslim women, especially feminist trailblazers such as Hossain, by jettisoning parts of their identities and political provenance, is not just negligent, it’s damaging.

It reminds me of how Islam is excised from Jalaluddin Muhammad Rumi’s poetry. Rumi, as he is mostly known to his American fans, is often described as the best-selling poet in the United States. His most widely read translations are produced by Coleman Barks, a Ph.D. in English literature from Chattanooga, Tennessee. Barks does not read or speak Farsi, is not familiar with Islamic literature, and owns his decision to minimize references to Islam. In her New Yorker article, ‘The Erasure of Islam from the Poetry of Rumi,’ Rozina Ali quotes Omid Safi, a professor of Middle Eastern and Islamic studies at Duke University:

Discussing these New Age “translations,” Safi said, “I see a type of ‘spiritual colonialism’ at work here: bypassing, erasing, and occupying a spiritual landscape that has been lived and breathed and internalized by Muslims from Bosnia and Istanbul to Konya and Iran to Central and South Asia.” Extracting the spiritual from the religious context has deep reverberations. Islam is regularly diagnosed as a “cancer,” including by General Michael Flynn, President-elect Donald Trump’s pick for national-security adviser, and, even today, policymakers suggest that non-Western and nonwhite groups have not contributed to civilization.

The debate about who has contributed to civilization (and therefore whose life is valuable or expendable) is equally crucial in today’s India. With mechanisms set up to strip Muslims of their Indian citizenship, the continued occupation of Kashmir, the recent anti-Muslim pogrom in Delhi instigated by Hindu nationalists, and now talk of a ‘corona jihad’ whereby the pandemic is being weaponized to stoke violence against Muslims, it is more imperative than ever to articulate and recognize the identity of Indian Muslim reformers and icons, especially fearless, radical women such as Rokeya Sakhawat Hossain.

I can only hope that MAG will heed this call for due diligence and, in fact, use this exhibit to start a conversation about Muslim feminisms. It is an area of study and activism packed with historically rich, complex, and compelling materials waiting to be explored and critically engaged with.

First published in Countercurrents.
Mara Ahmed is an artist, activist and filmmaker based in Long Island, New York. She’s currently working on her 4th documentary, The Injured Body: A Film about Racism in America.