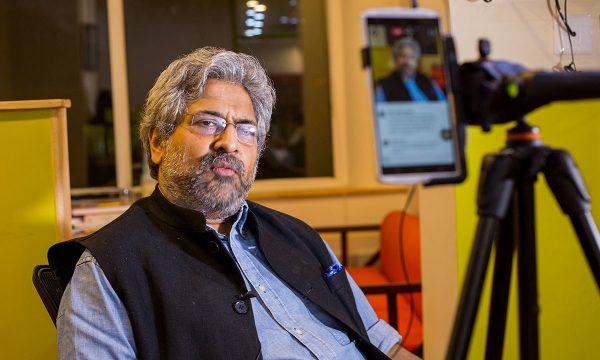 After a cursory glance at a catena of recent judicial decisions, it can be surmised that individuals ought not to be criminalised for exercising their fundamental rights within permissible boundaries. But the actions of the executive reek of clear abomination for the ones who criticise the ones in power, even if they are constitutionally entitled to criticise and dissent. The recent manifestation of this abomination for dissent, in the words of Siddharth Vardarajan, has been “the criminalisation of media”.

The recent FIR registered against the founder editor of The Wire, Siddharth Vardarajan is a case in point. On April 1, 2020, a group of policemen served a notice to Vardarajan at his residence in Delhi. The notice was issued under section 41(A) of the criminal procedure code 1973 and it cites two FIRs registered by Nitish Kumar Shreevastava and Hardajan Goud. The FIR alleges that Vardarajan had published false information in order to spread rumours and hostility among the public.

Though the FIR did not mention this explicitly, it is clear that the complaint was made regarding a story published on The Wire on March 31, 2020. This news story mentioned that Uttar Pradesh Chief Minister Yogi Adityanath had attended a religious gathering in Ayodhya, one day after PM Modi announced the nationwide lockdown.

In the FIR a total of 5 charges were levelled against him. However, any of these charges have no substance in the present case.

The first accusation was made under section 188 of the Indian Penal code 1860 read with Section 3 of the epidemic diseases act 1897. This provision makes the act of disobeying the duly promulgated orders of any public servant, an offence punishable for an imprisonment of 1 month or a fine of Rs. 200 or both.

In this case, the complainant, Nitish Kumar Srivastava is a station house officer of the city Kotwali Police station, Faizabad. Thus, the first pre-requisite of the complainant is a public servant is fulfilled as per section 21 of the IPC which defines a public servant. However, the second and the third condition as per which an order should be duly promulgated and further should be disobeyed by the accused has not been fulfilled because in this case, any public servant has not promulgated any order that has been disobeyed by Vardarajan by publishing factual information. Thus, the allegation under this section is fallacious.

The second allegation was made under section 505 (2) of the IPC.  As per this section, “whosoever makes, publishes or circulates anything with intent to incite, or which is likely to incite, any class or community of persons to commit any offence against any other class or community,” is to be punished with an imprisonment of 3 years or fine or both.

Vardarajan had published the story regarding U.P. CM attending the religious gathering in Ayodhya and this information is very well accurate. In fact, the U.P. CM himself tweeted the photographs of the event.

Yes, the earlier version of the story inaccurately attributed the statement “Lord Ram would save the devotees from coronavirus” to the Uttar Pradesh Chief Minister, but clarification was posted by Vardarajan on twitter wherein he corrected himself and said that the statement was actually made by Swami Paramahansa. Further, a corrigendum was also published alongside the wire story to rectify the factual error.

Here it is to be noted that intention is a necessary ingredient for making out an offence under section 505. Vardarajan’s action of posting clarification about the factual inaccuracy points out the absence of intention to insight discontent or enmity between classes or against the government

The third charge levelled against him in the FIR was under section 66 (D) of the information technology act. This provision concerns the act of cheating by personation and phishing through the means of a communication device or computer and is not at all relevant in this case.

The fourth allegation was made under section 67 of the IT act. This provision makes the act of circulating obscene material in electric form, an offence punishable with imprisonment which may extend to 3 years or a fine which may extend to 1 lakh. The news story about the U.P. CM attending the religious gathering amidst the lockdown is not obscene by any stretch of the imagination, thus this charge is also not maintainable.

The last offence that has been alleged in the FIR is under section 54 of the disaster management act 2005. This section provides for punishment when any individual raises a false warning or alarm regarding a disaster or its severity. However, this provision does not envisage culpability for the individuals for reporting the factually accurate information.

Even if this section was invoked due to the factual inaccuracy of the news story, it is still not maintainable because the FIRs were filed at 5:42 PM and 7:00 Pm on 1/04/2020 respectively and the clarifications from Vardarajan about the inaccuracy in attributing the statement to U.P. CM came out way before at 2:43 PM on 1/04/2020.

Now, as per the notice issued in name of the accused Siddharth Vardarajan and served to his wife, when Vardarajan was not at home, he was supposed to appear in the Faizbad police station to give his statement on the 14th April. This move of the U.P. police raises a huge question about priorities of the government amidst the nation-wide lockdown when inter-state movement is banned, courts are only hearing urgent matters and the whole police force has been vested with the responsibility of enforcing the social distancing norms.

However, We respectfully submit that when the whole nation has been gripped by a microscopic virus and the government has limited resources and manpower to deal with a mammoth of a problem, going after the journalists who criticise the government should definitely not be on the priority list of the government. Because our constitution envisages a rule of law and not a rule of revenge.

In Secretary, Ministry of Information and Broadcasting, Government of India v. Cricket Association of Bengal, it was opined that imparting and receiving information through the means of print media Was inextricable part of the right to freedom of speech and expression guaranteed under article 19 (A) of the Indian constitution.

Today, when the world has been gripped by a pandemic which can only be prevented and not be cured, the citizenry’s right to be informed has become more important than ever before. But if the government abridges this right by criminalising those who participate in this enterprise of disseminating information by using some far-fetched charges and allegations, it will threaten the very essence of freedoms and rights of the ones who impart information and the ones who consume it.

The fact that 3500 intellectuals, nearly 200 journalists and the editors guild have deplored the action of the U.P. government, indicates that unnecessary criminalisation of media is causing panic and resentment amongst the journalists. the suppression of an indispensable fourth branch institution which has always defended and armoured our democracy is not healthy for our polity.

What is more worrisome for our constitutional democracy is the fact that the case against Vardarajan is not an isolated one. Vijay Vineet, a journalist who reported about the people of Koiripur village, Varanasi who had to eat grass due to the shortage of food amidst the lockdown, was also served with a show-cause notice. Prashant Kannaujia, another reporter based in U.P. has also been booked for defamation and spreading information with the intend to cause fear and alarm in the public.

These charges were levelled against him because he made “objectionable remarks” about PM Modi and CM Adityanath in the way they were handling the lockdown. Even scarier, a  free-lance journalist Vidya Krishnan who writes for the Atlantic, posted an article about the callousness of the Indian government in handling the pandemic was subjected to a humiliating hate camping on the web, wherein some people called for her murder and gang rape due to her “unpatriotic coverage”. The reporters without borders found out that these people posting such distasteful content about her were linked to the BJP and the government.

The government should be mindful of what the division bench of the Supreme Court observed while releasing Prashant Kannaujia, a journalist who was also coincidently hauled up in the jail for publishing some “objectionable” story about the U.P. CM.

We respectfully submit that this scripture of the Supreme Court holds equal an in fact even more value in these troubled times when the information asymmetry between the state and the citizens needs to be reduced in order to fight the pandemic that is knocking at all our doors. It is not about one Siddharth Vardarajan, it is about the preservation of the piousness of right to dissent and speak out, even if it does not please the Majesty and even if the times are extra-ordinary.