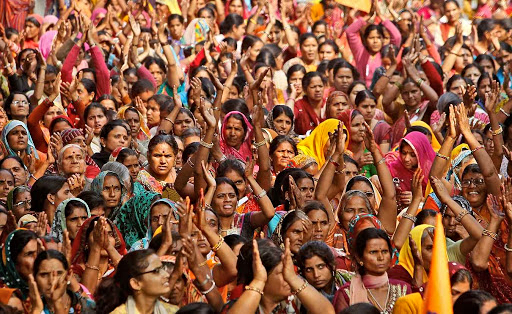 We, the undersigned women’s organisations express strong concern and register our protest against the violations of civil liberties guaranteed by the Constitution, by the Narendra Modi-led Union government and other state governments led by the BJP. Recent developments show that the government has been targeting intellectuals and activists as well as prominent journalists who have been questioning the government’s faulty policies. This is a serious attack on their democratic, civil and legal rights. FIRs, arrests, imprisonment without evidence have become the new norm.

The first stark example of this is the open threat of the government to journalists that they should not publish any criticism of the Centre’s policy during the lockdown period. Senior journalist Siddharth Varadarajan of The Wire has once again been targeted by the UP government because his publication reported their violation of the lockdown in Ayodhya. In Tripura ESMA has been imposed to quash the voices of nurses and doctors who are not getting enough protective gear.

The continued targeting of dissenters in violation of the right to protest and free speech is highly condemnable. The well known human rights activists, Anand Teltumbde and Gautam Navlakha face arrest on 15 April 2020 in trumped-up charges in the Bhima Koregaon case, despite several appeals that had been made nationally and internationally against their arrest. Even in the period of lockdown, the Central Government pressed for their arrest and the Supreme Court refused to extend their bail beyond 14 April. Sudha Bharadwaj and others are already in jail for over a year and a half in the same case. The real culprits of the Bhima Koregaon mass attacks on Dalits – Sambhaji Bhide and Milind Ekbote – roam about scotfree.

The latest case is with respect to the arrest of Meeran Haider and Safoora Zargar, of the Jamia Coordination committee, on trumped-up charges related to the recent Delhi communal riots. Safoora Zargar, who was involved in the anti-CAA protests in Jamia, has been arrested and remanded to custody even though she is three months pregnant and requires care. It should be noted that these arrests have been made at a time when the government has imposed a lockdown and there are reports that jails will be decongested to prevent the spread of COVID 19.

The heartlessness of the law enforcement agencies is further evident from that the fact that they have shown no regard for her health condition. This follows the random arrests of young Muslim men in Delhi which was ravaged by communal violence from February 23-28. Such arrests are continuing even in the lockdown.

We demand that all arrests, proceedings and any criminal prosecution of human rights defenders, anti-CAA protesters and journalists should be withdrawn forthwith. The Modi government must stop this witch-hunting and targeting of dissidents. The Central and State governments should also withdraw all orders that violate civil liberties guaranteed under the Constitution. On this day, the birth anniversary of Bharatratna Dr Babasaheb Ambedkar, we call upon all democratic minded people to expose the fascistic character of this government and voice their protest with all possible means.

First published in The Citizens.