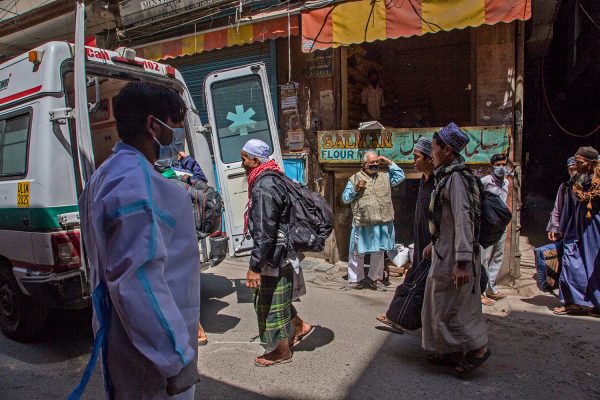 “Are you a Muslim?” asked a woman. Sumit Bhatnagar* (name changed), a friend of mine, who had gone to buy medicines for his parents was taken aback. Firstly, he is not a Muslim and secondly, he is a well-known hotel entrepreneur of Shimla. The woman could not identify him. Perhaps, because he has grown a long beard during the lockdown. As the PM had once said, people can be identified by their clothes; the woman tried to identify him by his beard. She went on, “What are you doing here? Are you going to the IGMC (Indira Gandhi Medical College), Shimla?” The question implied that Sumit, presumed to be a Muslim, must be visiting the hospital to meet the three Tabligi Jamaat COVID-19 patients.

For Sumit, this could have seemed trivial, but imagine what it would mean to a Muslim who, just because of his beard or attire, would be denigrated in the town for spreading Covid-19. And this is not an isolated incident. Thirty-seven years old Mohammad Dilshad, a resident of Bangarh in Una district of Himachal Pradesh, reportedly committed suicide on April 5. Dilshad, as stated by the police, was kept in quarantine after he had attended the Tablighi congregation at Nizamuddin, Delhi and was tested negative for COVID-19. The health officials had dropped him at his village in Bangarh. Some of the villagers appealed to others to boycott him socially and taunted him. Unable to face this humiliation, Dilshad committed suicide.

The Marasi community to which Mohammad Dilshad belonged is as old in the state, as most of the communities in Himachal. This community is known for playing band music in marriage ceremonies. He was no outsider for whom the locals held this animosity. Dilshad’s community is a part and parcel of the village life, as they call it.

Such is the environment of fear and intimidation in the state now, which is further being deliberately propagated by the sangh [RSS] cohorts. In another instance, the Gujjars, who are mainly a nomadic tribe in Himachal, are facing extreme difficulty in earning their livelihood. The Gujjars in Himachal are Muslims and are predominantly linked to the supply of milk. More than 20 quintals of milk produced by the Gujjar community is wasted every day in Tarsooh in Bilaspur district, bordering Punjab, as the threat to their lives looms large, and they are unable to supply the milk.

The social media is rife with propaganda against the Muslim community and all sorts of campaigns are unleashed, to the extent of describing the present threat of COVID-19 as ‘corona jihad’. In another incident, in Shimla, a post went viral on the social media about a man using abusive language and asking the shopkeepers not to allow the Muslim street vendors to open their outlets during curfew relaxation. From deliberate spitting on the currency notes to spitting on vegetables and fruits by the Muslim vendors, many roumurs and fake news are being circulated. However, the response of the people in Shimla was quick and the person spreading such propaganda was checked and was not allowed to turn the atmosphere communal.

Though the government has issued an advisory saying that communal hatred will be dealt with severely, the reality is that the enforcement agencies are also very selective in their disposition. A maulvi was booked in Himachal for arousing communal passions, rightly so, but not a single case has been filed against the perpetrators of the campaign on ‘corona jihad’. It is not a big surprise that since March 28, as reported in different sections of the media, the hashtag #CoronaJihad has appeared 300,000 times on twitter and potentially seen by 165 million people on it. The virulence of the hashtag is very high on WhatsApp as well. On Twitter and Facebook, one can still find a regulatory mechanism, but on WhatsApp, where a huge bulk of messages are exchanged, there is hardly any.

Meanwhile, in Himachal Pradesh the total number of COVID-19 cases has risen to 27. All the new nine cases are linked to the Tablighi connections. This has further accentuated the polarised atmosphere in the state. Two senior officers of the state government, both Muslims, an IPS officer and another medical officer have made fervent appeals to the Tablighi community to cooperate with the state government and ensure that they are properly tested. There is widespread fear amongst them because of the environment created in the state, which is holding them from reporting their travel history. This is all the more perilous for the state agencies to identify and isolate the positive cases.

So far in the state, information of 41 lakh people has been collected by the health workers during the door-to-door campaign to trace the coronavirus patients. A total of 4,684 people have been kept under surveillance, out of which 2,188 have completed 28 days of surveillance period, as reported by a local daily.

The state of Himachal has better paraphernalia in comparison with the other mountain states, thanks to the development of the infrastructure, which was laid down by the founding leaders of the state, especially Dr Y S Parmar, the first chief minister of the state. The government is well utilising that infrastructure to ensure that minimum damage takes place in the state. It seems that the patients undergoing treatment will be able to recover and the state will be able to check the further spread of the virus. But the wounds of trauma and despair to a particular community, which was not heard of in the mountain state, must also be repaired, earlier the better.