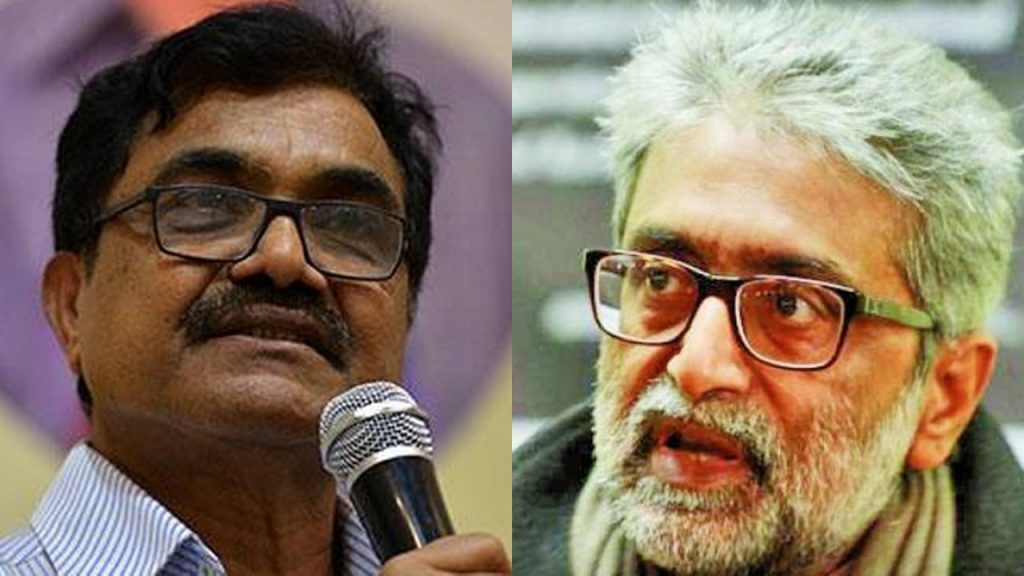 On March 16th 2020, the Supreme Court of India rejected the anticipatory bail plea of civil rights activists, Prof. Anand Teltumbde and Gautam Navlakha, asking them to surrender by April 6th 2020. The review petition heard on April 8th 2020 cited the COVID-19 pandemic as reason to extend the period of reprieve from arrest by another seven weeks. Today, the petition has been rejected giving Prof. Anand Teltumbde and Gautam Navlakha one week to surrender before the Bombay High Court stating, “we make it clear that there shall not be any further extension of time.” This order disregards the COVID-19 pandemic and displays a lack of concern over the health of persons over 65 years of age and the over-crowding of prisons at a time of a global health crisis. The order shows how inconsiderate the courts are to the realities of the people of this country. Rejection of the bail plea and issuance of an order to surrender amidst a pandemic reiterates the nature of Indian judiciary as subservient to the interests of the Brahmanical Hindutva Fascist State. Both civil rights activists are charged under the draconian Unlawful Activities (Prevention) Act (UAPA) and various other sections of the Indian Penal Code (IPC) for their alleged involvement in the ‘violence’ at Bhima Koregaon, Maharashtra on January 1, 2018. Notably, neither were present at Bhima Koregaon on that date nor had any connection to the Bhima Koregaon Shaurya Din Prerna Abhiyan organised by the Elgaar Parishad.

Rejection of the bail plea by the Supreme Court and deployment of UAPA by the Maharashtra Police must be seen in concert with the general policy of the current regime, a policy tailored to suppress voices of dissent and any opposition to Brahmanical Hindutva Fascism. The targeting of academics, activists, journalists, lawyers, students and trade unionists following the Bhima Koregaon programme alongside the refusal to hold accountable the known perpetrators of the violence, Sambhaji Bhide and Milind Ekbote, reveals the agenda of the BJP-RSS and their lackeys in the Maharashtra Police and a compromised judiciary. The programme at Bhima Koregoan which marked a broad unity between Adivasis, Dalits, Muslims and other oppressed communities in Maharashtra posed a severe challenge to the RSS project of establishing a Hindu Rashtra. The Indian legal system with its array of extra-judicial and anti-people laws has been fully utilised to create a bogey of terror in the name of Bhima Koregaon and consistently arrest civil rights activists who have spoken out against the atrocities perpetrated by the State.

Prof. Anand Teltumbde is one such civil rights activist. A professor at the Goa Institute of Management, he is the General Secretary of the Committee for the Protection of Democratic Rights (CPDR) in Maharashtra and a prolific writer critical of anti-people policies. His work on the Brahmanical nature of the Indian State is internationally renowned. Likewise, Gautam Navlakha, a former editor of the Economic and Political Weekly, has written on topics ranging from Indian defence policy to Kashmir. His commentary on the contemporary political situation and his work in People’s Union of Democratic Rights (PUDR) to highlight the exploitation of workers, violence faced by Adivasis and oppression of religious minorities, have brought to fore the deep fractures in Indian society. These sharp criticisms made by Prof. Anand Teltumbde and Gautam Navlakha have often attracted the ire of State.

Targeting of dissenting voices has been the tried and tested method of authoritarian governments everywhere. In the Bhima Koregaon case, it began with the arrests of trade unionists and workers at Reliance Energy Ltd. in January 2018. This was followed by raids of homes of several activists in April and then the arrests of Arun Ferreira, Mahesh Raut, Rona Wilson, Shoma Sen, Sudha Bhardwaj, Sudhir Dhawale, Surendra Gadling, Varavara Rao and Vernon Gonsalves in June and August 2018. In October 2019, following the defeat of the BJP in the Maharashtra Legislative Assembly Elections, the Bhima Koregaon case was suddenly transferred from the Maharashtra Police to the notorious National Investigation Agency (NIA). This action reeks of the malicious intentions of the BJP-led Central Government.

The incarceration of the nine activists is part of the relentless assault on the basic rights of civil rights activists and all voices of dissent. That these incarcerations continue despite the spread of the COVID-19 pandemic indicates that state repression will march onward irrespective of the circumstances. The attempt to arrest Prof. Anand Teltumbde and Gautam Navlakha must also be seen in this context. Today, the country is under a lockdown implemented without warning or preparation. This has left a vast majority of the people, notably those of strained economic means and the socially marginalised, facing the twin threats of infection and starvation. The State’s response to this is marked by apathy, callousness and inaction. At the same time, BJP led Central Government and its lackeys in the Maharashtra Police and NIA and a compromised judiciary have worked overtime to jail Prof. Anand Teltumbde and Gautam Navlakha and ensure that all political prisoners remain incarcerated. This can also be seen in the continued incarceration of Shoma Sen and Varavara Rao, both of whom are aged persons with severe physical ailments and consequently susceptible to infection from the COVID-19 virus. This is glaringly evident in the case of Dr. GN Saibaba, a professor of English from the University of Delhi with 90% physical disability, incarcerated since 2014. The rapidly deteriorating health of Dr. Saibaba is likely to exacerbate at a time when prisons are struggling to provide basic medical care and maintain physical distancing guidelines. These difficulties are magnified by the overfilling of prisons in India. According to the National Crime Records Bureau, Indian jails are significantly filled beyond capacity with prisons in Maharashtra being nearly 30% over the national average. Consequently, the chances of a COVID-19 infection are exponentially increased which can be a death sentence for persons like Dr. Saibaba. The surfeit of efforts involved in silencing voices of dissent when compared with the State’s paucity of action in combating COVID-19 and mitigating its impact on the people clearly indicates its priorities.

Furthermore, it is to be noted that during this crisis, the BJP led Central Government and State Governments have intensified their attack on others they consider a hindrance to the establishment of a Hindu Rashtra. The arrests of Dr. Kafeel Khan, arrest of Meeran Haider, a student activist from Jamia Millia Islamia, re-arrest of Akhil Gogoi, and the continued incarceration of Sharjeel Imam and Khalid Saifi among many others on fabricated charges and under draconian laws is a clear sign of the undemocratic, vengeful character of the Brahmanical Hindutva Fascist state. While the anti-CAA protests displayed a vibrant culture of protest inviting unity of people across class, caste, community and culture, the crackdown faced by the protests revealed an unabashedly saffron tint in the police, administration and judiciary. This was felt acutely in the communally charged violence in Delhi in February 2020 which has left thousands homeless who now face the lockdown without food or shelter.

The Campaign Against State Repression (CASR) calls on all democratic organisations and individuals to come together and condemn the denial of relief for Prof. Anand Teltumbde and Gautam Navlakha, stand in solidarity with all such voices of democracy and demand the immediate release of all political prisoners. Our unity at this time of crisis is all the more urgent and necessary for our silence in the time of injustice is bound to render us voiceless in the days to come. Let us unite and demand