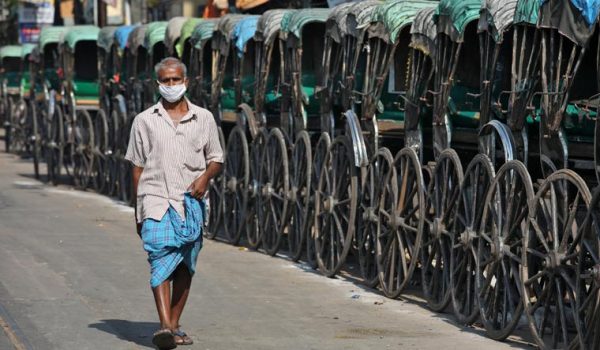 The debate between economy and health is best explained by the following Urdu couplet by Waseem Barelvi:

“Ghar sajane ka tassavur to bohut baad ka hai;
pehle ye tai ho ki is ghar ko bachayeN kaise”
(Decorating the home should be thought of much later;
first let us decide how to save this house)

Like many other countries, the Indian Government was also slow in responding to the COVID 19 threat. Initially only travellers coming to India were checked and Indian Citizens in heavily affected countries like China, Iran and Italy were brought back to the country. Advance planning was conspicuous by its absence, except that some state governments like Kerala and Odisha did take initiatives early.

Once affected cases started increasing, the central government announced a one-day curfew on March 22 and imposed a national lock-down that evening for 21 days. Some felt it was late in being announced while others felt that it would ruin the economy of a developing country like India! Since we are running about two weeks behind the United States, and about four weeks behind Italy, in terms of when the first seeding of cases took place, we may well be luckier than these nations, especially on account of the lock-down, but this is only speculation.

Numbers of Infections as I write this, stand at: Globally 1,290,859 (India 4,281).The world as a whole seems to be reaching the end of the first phase of the virus. This translates to lesser numbers of future cases and the majority may be less severely affected. However, others may fall seriously ill, particularly if they are elderly; those having heart, diabetes, cancer or kidney problems, will need hospitalisation and advanced care.

While the lock-down was a bold and necessary step, the follow-up by central and state administrations was poor. There was little advance planning and the public suffered tremendously. The maximum adverse impact was on the poor people, especially the migrant workers and daily wagers, who suddenly found themselves without a job, no money and no food. Adequate warning would have ensured essential supplies reaching everyone and if wages for persons in the massive unorganised sector were ensured, migrants would have stayed put.

The PM spoke to the nation again on 03 April. While his speech was high on motivation, akin to his monologues in his monthly ‘Maan ki Baats’, no specifics were conveyed. He did, however, mention that lifting the lock-down in a staggered manner was being contemplated. No plan has as yet been announced, but the harvesting season is already upon us and many businesses, especially those that are export-oriented and employing daily wagers need to restart.

The PM has spoken to the nation a number of times, exhorting everyone to stay indoors. He requested the public twice to firstly show their appreciation for all health workers engaged in treating and supporting corona virus patients by clapping/ringing bells, while remaining in their homes; and secondly to light a candle/equivalent after switching-off all lights on April 5 and reflect/mediate in silence.

However, many, including elected leaders came out on the streets, mixed together, shouted slogans, sang bhajans and so on. Such stupidities and blatantly ignoring the PM’s desires show how indisciplined, ignorant, superstitious and prone to religious mumbo-jumbo we are. If such actions are repeated, what is the use of lock-downs and social-distancing?!

Earlier, when nation-wide curfew was imposed on March 22, the Chief Minister of UP broke the curfew along with his supporters and entourage and went ahead with a religious ceremony. A major set-back has been the holding of the huge Tablighi function in New Delhi, instead of banning it completely. All such activities need to be condemned in the strongest terms.

Being the second most populous country in the world, our problems get magnified in a pandemic of this type. Besides weaknesses highlighted above, negative factors include extreme poverty in many areas; densely populated cities with huge floating populations as workers travel to them from surrounding mofussil towns and villages as also travel between different states for work.

Although we are the largest democracy in the world and probably have the world’s best Constitution, our political systems have been degenerating for decades, affecting good governance. Our bureaucracy is one of the worst in the world; hence internal administration is visionless and lacks attention to detail. Both the political dispensation and the bureaucracy are not accountable, except on paper!

Compounding such problems, we have a weak health-system and extremely low capacity of hospital beds. We also do not have enough health-care workers; these will inevitably deplete as the virus spreads. Diseases like tuberculosis, respiratory problems, pneumonia, diabetes and hypertension are common; these are compounded by high rates of smoking and air pollution. With the entire health system geared for COVID-19 response, as it correctly should be, the danger is that some other diseases may get out of control.

Successive governments have made promises about improving India’s health system but budgetary allocations have been inadequate. Despite this, there has been improvement in some facets in the past couple of decades. These include large-scale immunization and better hospitals in cities, but the system itself is not particularly strong, and it is highly variable across states.

Despite all these negatives and many others, India has progressed on account of the native intelligence and frugality of bulk of the population; a culture of savings; a propensity for innovations that we call ‘jugads’; and a professional military that has always responded with alacrity for bringing succour to the populace.

Our positives also include a very high proportion of young people, who have a desire to take the nation forward. India’s population above the age of sixty-five is much smaller than that of Italy and China and other affected countries. Our potential for growth is unfortunately stymied by wide-spread corruption; a risk-averse and rule-bound bureaucracy; and far too much focus on politics of the wrong kind! Any major peaking of the pandemic is likely to have devastating, far-reaching consequences.

A large part of business and services activity is in the informal economy and more than half the country depends on agriculture. However, farmers affected by the lockdown will not be able to sell their crops. Additionally, large number of migrant labour, who were working in cities and sending money back to villages, are now out of work and some are back in villages. This adds to the rural burden. Rural India will certainly take a hit in terms of health, but we must find ways to protect the farm economy.

The central and state governments are trying to do their best to ease some aspects of the financial situation, but much more is needed. As a first step, business leaders must provide hygienic living and food arrangements for their daily-wage migrant workers, instead of asking the labour to fend for themselves.

The partial lock-down envisaged has to be a trade-off, where we reduce a huge economic hit but also deal with the virus in a pragmatic manner. Being a developing country, this will take a fair amount of time, and the damage will probably last for months, if not years.

A frightened public accepts abridgments of civil liberties that are otherwise hard to justify, such as the tracking of everyone’s movements; forcible medical treatment; involuntary quarantine; restrictions on travel; freedom of assembly; and censorship of what the authorities deem to be disinformation. These must be only temporary.

COVID 19 has created an unprecedented situation that has affected our families, businesses, communities and our daily life in many ways. In these difficult times, it is heartening to see people coming together to face the situation with solidarity.

We are truly inspired by the selfless healthcare and essential services workers on the front-line, working tirelessly and caring for the people in need. Our populace, along with governments have so far done a good job, despite some quirks. We might just yet be able to escape a catastrophe, if we remain disciplined. We can learn and implement what Taiwan, South Korea and Singapore have achieved.

First published in The Citizen.
Lt General Vijay Oberoi is a former Vice Chief of Army Staff and Founder Director of Centre for Land Warfare (CLAWS)