Speaking Up
Anti-Muslim racism at work again in its cradle
April 6, 2020 Rajeev Khanna 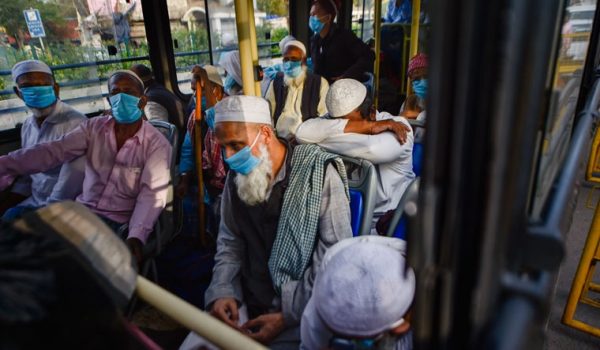 The cacophony around the Tablighi Jamaat gathering at the Nizamuddin Markaz in the national capital has turned into communal propaganda over television channels and the social media. Over the last few days Gujarat has witnessed a targeted attack against the minorities on Whatsapp groups, putting a large section of Muslim Gujaratis under tremendous stress and fear.

Members of civil society organisations are finding it very difficult to contain and counter the racist crescendo.

Observers say the Tablighis by organising an event from March 13–15 provided a ‘free hit’ to the usual suspects, who are always on the lookout for an occasion to spew venom against the minorities and are making optimum use of the scenario.

A message that went viral as it were called for the social and economic boycott of Muslims. The message accused Tablighis of gathering 2,500 Covid-positive Muslims and sending them across the country to spread the disease. It warned people from purchasing vegetables or fruits from the minorites “as they are carrying out jihad of spreading coronavirus” and to spread the message across.

The state government has now filed cases and arrested seven persons for these hate messages. The police said the accused, some also booked under the Diaster Management Act, are residents of Navsari Jamnagar, Amreli, Anand and Kutch districts. Their ages vary from 27 to 70 years. The Indian Express, quoting official sources reported, “In Amreli Riken Singhav, a 27 year old employee of a private firm, was arrested. Om Navsari, the accused have been identified as Umakant Rathod(50) and Ratilal patel (70).”

The newspaper further reported, “Both were released on bail on Friday. The others who have been arrested are Paras Vala (39), a driver and Jayanti Giri (51) a businessman, in Jamnagar.”

In Gujarat the police have issued an advisory against spreading such messages. Activists like Advocate Shamshad Pathan of the Alpsankhyak Adhikar Manch pointing to more such messages circulating through Whatsapp said, “We are feeling helpless in such a situation. The hate-mongers are not even aware that Muslims are working with people from other communities to overcome the crisis resulting from the Covid-19 outbreak.”

“We have established a helpline for people in distress because of the lockdown and have been getting calls from across Gujarat from people belonging to various faiths. They are very relieved and welcoming when several of our volunteers reach them with food, ration and medicine despite wearing the skullcaps and beards they are identified with,” Mujahid Nafees of the Minority Co-ordination Committee, Gujarat said.

Pathan has thought of another way to deal with the racists. He is urging the people being attacked to go ahead and lodge FIRs with the police against the harassment.

“One of the persons, Javed, has gone ahead and lodged an FIR at Sojitra in Anand against one of the persons spreading hate. We are asking more and more people facing harassment to follow suit. Perhaps this will discourage the hate-mongers.”

“We have been trying our best to tell people not to resort to such communal diatribe as it will only vitiate the atmosphere at a time where everyone needs to come together to deal with the corona pandemic,” Pathan told The Citizen.

On Thursday he held a Facebook Live session explaining how people can approach the police against individuals or newspapers spreading hate. “If your local cops refuse to register a case, you can lodge an e-complaint on the state police websites that can be followed later.”

He asked people to approach the police with newspaper clippings and screenshots of the hate messages being spread in their localities.

The strategy seems to be drawing some response as reflected in the initial arrests of those spreading this hate. The minorities, however, remain fearful and worried about the fall out of the hate propaganda.