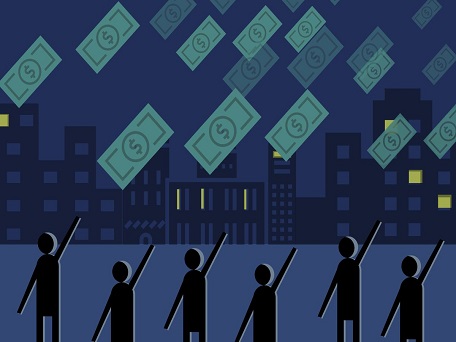 The crisis created by Covid-19 compels us to rethink our collective political imagination. While the slew of welfare measures announced by the Finance Minister are surely welcome (though more could have been done, and earlier), we need to urgently reflect on what it means to be a citizen and how states must care for everyone in their jurisdiction.

Several state governments have already showed us the way: Kerala, West Bengal, Odisha and Chhattisgarh announced combinations of free food and cash transfers to the poor and needy. Nevertheless, we could do more to institutionalise social solidarity at a time when social distancing is becoming the dominant discourse. Under the circumstances, the emerging idea of universal basic income, or UBI, merits consideration.

The most important aspect of a UBI is, as the name suggests, that it is universal. Everyone, irrespective of wealth, income and employment status is eligible to receive exactly the same amount of cash. UBI is unconditional. Against criticisms that such schemes would dis-incentivise work, studies have shown to the contrary. Indeed, one pilot run by Self-Employed Women’s Association (SEWA) in Madhya Pradesh revealed that giving money to everyone in the study area led to improvements in health, educational and productivity outcomes.

The component of universality is important to stress in these times of turbulence and the lockdown that it has necessitated. We are all seeing heart-rending images of streams of impoverished people compelled to leave the cities and, in so many cases, walk back to their villages. As our research, snapshots of which are available at www.livesonthemove.com, shows, while most of them may well be included in ‘below poverty line’ lists and eligible for existing welfare schemes, not all of them may be.

Migrant worker’s names may not always be included in the beneficiary lists in their villages. Or, they may well have improved their economic condition over the last few years and would have had their names omitted. Many people employed in India’s burgeoning gig economy are also finding themselves without employment: not all of them would be eligible for existing welfare schemes or even the schemes introduced by the Finance Minister today.

While migrant workers and the rural poor undoubtedly face immensely more hardships than gig workers in India’s urban economy, schemes targeted exclusively to the poor are likely to foment resentment among non-poor precarious gig workers who have found themselves laid off. The task before states is to build solidarity in such turbulent times: a universal basic income bridges existing chasms among our citizens and promotes the idea of togetherness.

Universal and unconditional income transfers imply that no additional bureaucracy will be required to administer means-tests to identify eligibility. As the political economist Pranab Bardhan notes, targeting the poor in a country as diverse and heterogeneous as India has been full of complications, corruption and controversies. UBI will entail none of these, even as it provides a guaranteed income to all without—and this is important to stress—compromising existing welfare programs. Nothing quite blends the left’s commitment to emancipation with the right’s suspicion of bureaucracy as the UBI.

Although the implications of the pandemic on global economies are impossible to foretell, the world after Covid-19 will be very different. Artificial Intelligence could become more salient to our “physically distanced” societies and economies than ever before. Such possibilities have already led many economists in the western world to propagate some form of universal basic income: these include folks who were formerly critical. In the United States, the idea is gaining traction across the political spectrum, espoused by Democrats and Republicans alike. Over 500 public figures recently called for their governments to institutionalise a UBI.

The Chinese use the word “crisis” to describe a combination of danger and a critical juncture where things change. Indeed, historically crises have supplied critical junctures where change has been indispensable. Britain instituted its National Health Service, the closest thing to a religion in that country, in the wake of the Second World War.

In his address to the nation, Prime Minister Narendra Modi invoked the Mahabharata to suggest we are at war. The crisis wrought by Covid-19 is thus an apt critical juncture for us to reflect on our membership in the political community. While the suspicions, anxieties and worries of recent months—provoked by the mindless imposition of the Constitutional Amendment Act—cannot be easily resolved, a universal basic income could provide an opportunity to renew our commitment to a shared citizenship.

The author is lecturer-global development politics, Department of Politics, University of York. The views are personal.