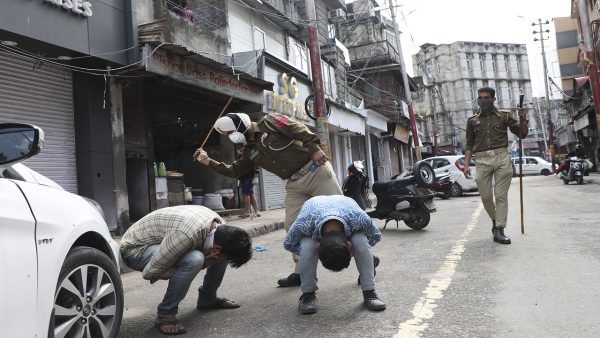 Healthcare workers who are at the forefront of the fight against COVID-19 in Kashmir are also undergoing harassment, with a number of reports emerging of abuse at the hands of security forces. Many health workers have been roughed up for violating the curfew. This is in addition to the inadequate medical facilities, poor internet connectivity and other restrictions imposed on the people of Kashmir,

A healthcare worker from Srinagar city told NewsClick on March 28 that he was beaten up by a paramilitary trooper. “I was returning from work on Friday when the police posted at the Dalgate locality stopped me and asked me to reveal my identity. After I explained that I work in the hospital, he allowed me to pass the barricade. As I walked ahead, another policeman rushed towards me and started thrashing me ruthlessly,” Abid Rehman said.

The 25-year-old health worker further alleged, “I was struck on the head so hard that I almost lost consciousness and he then hit me with a rifle butt.”

Since the 21-day lockdown was imposed across India on March 25, a number of videos have emerged on social media showing security forces roughing up and misbehaving with healthcare professionals, power department workers and residents. The only response of the police to such allegations has been to challenge the authenticity of the videos.

On March 26, another medical professional claimed that he was assaulted by a policeman in south Kashmir’s Pulwama. Dr. Samiullah Dar told reporters that on Thursday, he was not allowed to leave the community health center in Zainapora in Shopian despite showing security forces his ID card and curfew pass. He was allegedly beaten up with guns and one trooper reportedly snatched his phone and went through his photos.

As many as 55 cases of COVID-19 have been reported in Kashmir. Two people have died. In both the cases, there have been allegations of negligence on the part of the hospital authorities. Officials said that as many as 11,644 people are under surveillance while 355 persons are in isolation in hospitals.

In the densely militarized region of Kashmir, where over 700,00 million troops are stationed amid the ongoing conflict over the revocation of its special status by the far-right Indian government, the healthcare system has been devastated. During the early 1990s, when armed militancy against Indian rule was at its peak, ambulances would be thoroughly searched at numerous security checkpoints.

Human rights groups and reports have recorded cases of health professionals in the region undergoing physical and mental abuse while performing their duties. “Healthcare workers have frequently been detained, assaulted and harassed,” Asia Watch’s report noted. There is ample evidence from human rights organizations, including the Jammu and Kashmir Coalition of Civil Society, highlighting instances of security forces deliberately preventing ambulance drivers from transporting injured persons to hospitals even in emergency situations.

Healthcare workers and locals have also decried the poor facilities available for patients and those in isolation at different hospitals. Doctors are often forced to ask patients to procure medicines from outside. Reports of stray dogs inside hospital wards attacking patients also recently surfaced in the media.