Speaking Up
Hindutva organisations must pay for the damages caused by them
April 2, 2020 Sandeep Pandey 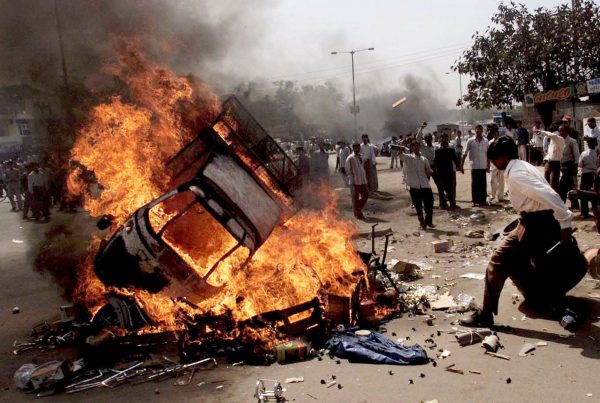 The Uttar Pradesh government has issued notices against “damages to public and private property” during protests against the Citizenship Amendment Act (CAA), National Register of Citizens (NRC) and National Population Register (NPR) that took place in December 2019. The Chief Minister has counted this as one of his achievements in an article that got published in various local newspapers on the occasion of the completion of three years of his government. Nearly two hundred people have been asked to pay over two crores as the cost for the “damage”.

FIRs have been registered against people who had exhorted, instigated or committed acts that caused damage, as well as those named by the police, under the recently notified ‘Uttar Pradesh Recovery of Damage to Public and Private Property Ordinance, 2020’.

While the “one who created the trouble should pay” principle may be logically sound, the question is how can the process of recovery begin even before the trial has been initiated in any court against the people mentioned in the FIRs. The Claims Tribunal under the ordinance is only authorized to investigate into the complaints and assess the amount of damage caused during a violent protest or a riot. Whether the people named in FIRs were actually guilty of having caused this damage will be determined by a court of law. However, even before the accused have been convicted, the local administration is forcing them to pay for the damages.

In Bulandshahr, people have already paid sums that round up to Rs. 6 lakhs; in Firozabad, Rs. 4 lakhs have been paid out of Rs. 45 lakhs; in Kanpur, fifteen of the accused have paid around Rs. 2.02 lakhs, and another 21 have been directed to pay Rs. 1, 46, 370. Similarly, administrations in Muzaffarnagar, Sambhal and Gorakhpur expect people to pay various amounts as cost of damage. In fact, the local administration in Lucknow has even threatened to increase the amount by 10% if the payment is not made within the stipulated time. The accused will face imprisonment as well as attachment of property upon non-compliance. Such coercive measures being adopted by the UP government are simply draconian and meant to instill a sense of fear in anybody who intends to dissent from the government and even thinks of holding a protest – a gross violation of Constitutionally-granted fundamental rights on the part of the State forces.

Secondly, there is evidence that the police and Hindutva workers had indulged in vandalism, especially at Muzaffarnagar on 19th December, 2019, inside homes owned by Muslims, a home for children, and a mosque. Why have FIRs not been registered against them and notices of recovery for damages issued to them? What about compensation for those families who lost their members to bullet injuries, in all likelihood killed by police? In fact, a Samajwadi Party Member of Parliament recently asked the MHRD Minister in Parliament whether he intends to claim Rs. 2.66 crores from Delhi Police for vandalizing the Jamia Millia Islamia library.

The moral high ground from which the UP CM is taking such decisions stands on very shaky foundations, considering that the Hindutva brigade has made the use of violence to promote itself politically. The incident which catapulted them to a position of ‘strength’ – the demolition of Babri Masjid – is also responsible for introducing the problem of terrorism into India. Before this unfortunate event of 6 December, 1992, stray incidents of violence had also taken place. However, the first serial bomb blasts in Mumbai in early 1993 occurred as a reaction to the Babri Masjid demolition. After this, a number of serial bomb blasts happened until 2001 when the attack on twin towers in the United States, after which we started calling them “terrorist attacks”. Prime Minister Atal Behari Vajpayee unilaterally joined the call given by US President George Bush for a ‘War Against Terror.’ A number of Muslim youth who were arrested after the terrorist incidents were carried out in India, admitted in interrogation that the main provocation for them to join extremist organisations was the 1992 demolition of the Masjid.

The security scene in this country has undergone drastic shifts after India joined the fight against terrorism. State of the art technology and training were incorporated into our security apparatus. We collaborated with countries like the US and Israel to strengthen our defense mechanism against possible terror attacks. At local levels, a host of security guards were visible from outside offices to residential colonies, checking the entry of individuals and subjecting their belongings to X-ray machines. Obviously, these mean huge expenses for both the government as well as the country.

Following the principle of “one who created the trouble should pay”, should not the individuals associated with Hindtuva organisations – Bhartiya Janata Party (BJP), Rashtriya Swayamsewak Sangh (RSS), Vishwa Hindu Parishad (VHP), Bajrang Dal, Shiv Sena, etc. – who were involved in the demolition of the Babri Masjid too be asked to pay for the amount spent on fighting terrorism and beefing up our security after this incident?

We are not even talking about the much more serious damage that Hindutva hardliners have caused, which cannot be measured in monetary terms, like the murder of Mahatma Gandhi, allowing Professor G D Agrawal or Swami Gyan Swaroop Sanand to die after fasting for 112 days for river Ganga, supporting communal pogroms like the one in Gujarat in 2002, mob lynching, daylight murders of intellectuals, etc. No other group has so systematically destroyed the social and psychological well-being of our society and vitiated the atmosphere in the country, like the Hindutva brigade has done. Lets not forget that all of this has also brought international disrepute.

Instead of working on the basic issues of people’s lives – increasing inequality between the rich and the poor, poverty, unemployment, corruption that is still prevalent in spite of all their tall claims – BJP governments have brought up contentious issues creating immense insecurity and fear in the minds of Indian citizens. Their political agenda of polarization supersedes everything else, including the interests of the common citizens of this country, who have voted them to power. Considering the material, social, political and economic damage that they have caused in this country, the BJP has no moral authority to continue ruling this country.