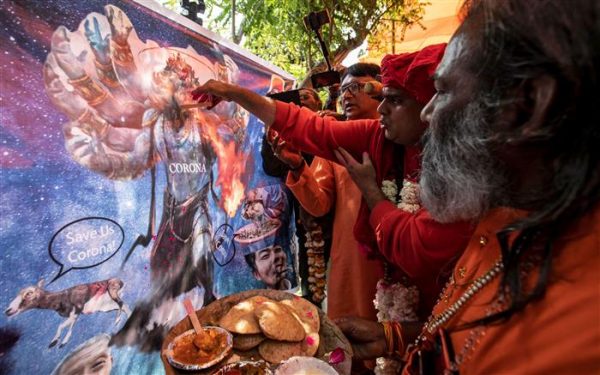 On March 19, Prime Minister Narendra Modi warned Indians that a tough battle against the deadly coronavirus was looming and he asked them to fight it with resolve and restraint. On March 24, in his second address, Modi declared that the country would go into complete lockdown in four hours, at midnight. On March 25, in his Mann Ki Baat radio address, he seemed to say sorry for the trouble, but hey, it is unavoidable! He also quoted some Sanskrit shlokas to say that this is the only way out, come what may.

Meanwhile, here’s what’s going on in the real world. COVID-19 cases are continuing to rise in India, though at a slow pace. Many attribute this to the low level of testing – if you don’t test, you won’t know at all. Ignorance is bliss. But everybody is agreed that it is coming – and it’s coming fast.

And, the lockdown has turned a tragic flight for life for hundreds of thousands of people, even as millions more sullenly stick it out at homes, afraid of what the future holds for them. As a migrant worker from Uttar Pradesh said: “Before the coronavirus gets us, hunger will finish us off.”

Modi’s BharatiyaJanata Party (BJP) rules the states of UP and Haryana, from where thousands thronged Delhi’s interstate bus terminus in the past three days, hoping to get a bus to their villages. Typically, the response varied from police brutality, herding of people like cattle into 2 km-long lines in Delhi, with police personnel barking orders in hand-held amplifiers, right down to officials spraying disinfectants from hoses on cowering returnees in Bareilly.

And, in other news, doctors, nurses, hospital staff, even ambulance drivers in many states have been protesting against lack of protective gear. These are the people who Modi has been praising incessantly, even asking for countrywide applause on the Janata Curfew day.

So, what does this very brief – and sanitized– recap of the so-called ‘war’ against COVID- 19 (coronavirus) in India tell us? It is all there in the three speeches of PM Modi, mentioned above.

The Philosophy of the King

Usually, the question would be this: what is so and so country’s strategy in fighting back the pandemic? There will be differences. China and South Korea moved in fast and decisively, as did some others. The US, Italy and the UK delayed, and then rushed for fire-fighting. And so on.

There are common things, too, everywhere. Science and scientists are in the forefront. Data is key. Medical care is the foundation – from testing to treatment. Information and awareness is also equally important. Governments are arming the people with knowledge.

But, in India, going by PM Modi’s thoughts, things are different. It’s a parallel universe. Have a look at some of the defining features of what Modi is saying and you will see the whole strategy in its direly vivid form.

People Have To Fight This War (not Govt.): In his very first speech on March 19, Modi made it clear that the pandemic will be fought back only by resolve and restraint of the people. They needed to be resolute in their beliefs and – by implication – in their trust in his government. And they needed to be restrained by maintaining social distance. What he was saying was that the effect of this disease will ultimately be determined only by the peoples’ own actions – not by government actions.

Once you say this, once the strategy is defined like this, the responsibility of the government gets pruned immensely to just supervising the resolve and restraint. The battle becomes a law and order problem.

This Strategy is Based on Ancient Wisdom: This was needed because people wantedto know whether the lockdown really needed to be announced like demonetisation, a bolt from the blue at 8 p.m. They wondered whether the chain of transmission could really be broken by remaining at home. There was – is, in fact – widespread uncertainty, worry and sleepless nights. Not just for the captains of industry and tycoons, but much more for common workers, farmers, employees, small businesses, students and so on.

Hence, Modi’s references to ancient sayings. These are commonplace homilies – “nip the disease in the bud”; “good health is the greatest fortune” – but rendered in Sanskrit and framed as ancient, they are supposed to further consolidate the peoples’ resolve, to assuage their troubled minds – and portray Modi as the great, wise patriarch, caring for the country.

Sorry, But I Know You Will Forgive Me: This framing of himself as a true well- wisher is a manipulative ploy. It started in the very first address when Modi said that he had come to ask something from the people and that they have never disappointed him. Then, in Mann Ki Baat, he upped the ante by saying he apologises for all the trouble caused by the lockdown, but “I know you will forgive”!

Coming as this does when his party-run governments are mercilessly herding migrant workers, setting up detention centres in sports stadia and generally revealing hostility toward their plight, is a staggering piece of chicanery. But then, Modi is simply extending the strategy he put in place: let the people fight it out, we are there with both carrot and stick.

Carrot Pie with Bread Crumbs: So, what’s the carrot in all this? Apart from the philosophical postulate that good health is good fortune and happiness – as big a carrot as can be – the Modi government also indulged in some creative book keeping and conjured up a package of relief for the welfare of people. Most of the money was already slated to be spent but – typically – repackaged and sold all over again.

Some of the bread crumbs, like increase in rural job guarantee scheme wages by Rs.20, were just notional. There is no work, so no question of wages.  There were also general announcements, after-thoughts really, on landlords not taking rents, employers not cutting salaries/wages, etc. There is no mechanism to implement all this – it’s just pies in the sky. Not surprising, because the whole idea is to manipulate people, back-up the propaganda with mainstream and social media support, and sit tight till the storm passes.

That’s the substance of the BJP-led Indian government’s strategy to fight this pandemic. There is no worthwhile effort to provide protective gear to health personnel, no substantial increases in isolation wards/beds, no jump in ventilators, no gearing up of the vast though crumbling government-run healthcare system. Even though one state within India – Kerala – has put up and implemented an alternative strategy – Modi and his government are blissfully innocent of it.

In short, Modi and his ideology have developed a whole alternate strategy that saves money, looks dramatic and elevates his own image. Meanwhile, India and its millions await the whirlwind.