Speaking Up
Essential services, expendable lives
That’s the story of Mumbai’s safai karamcharis on the frontlines of the battle against Covid-19. Wages delayed, and with little protective gear, they’re still clearing garbage even in the toxic air of the Mahul area
April 1, 2020 Jyoti Shinoli/PARI 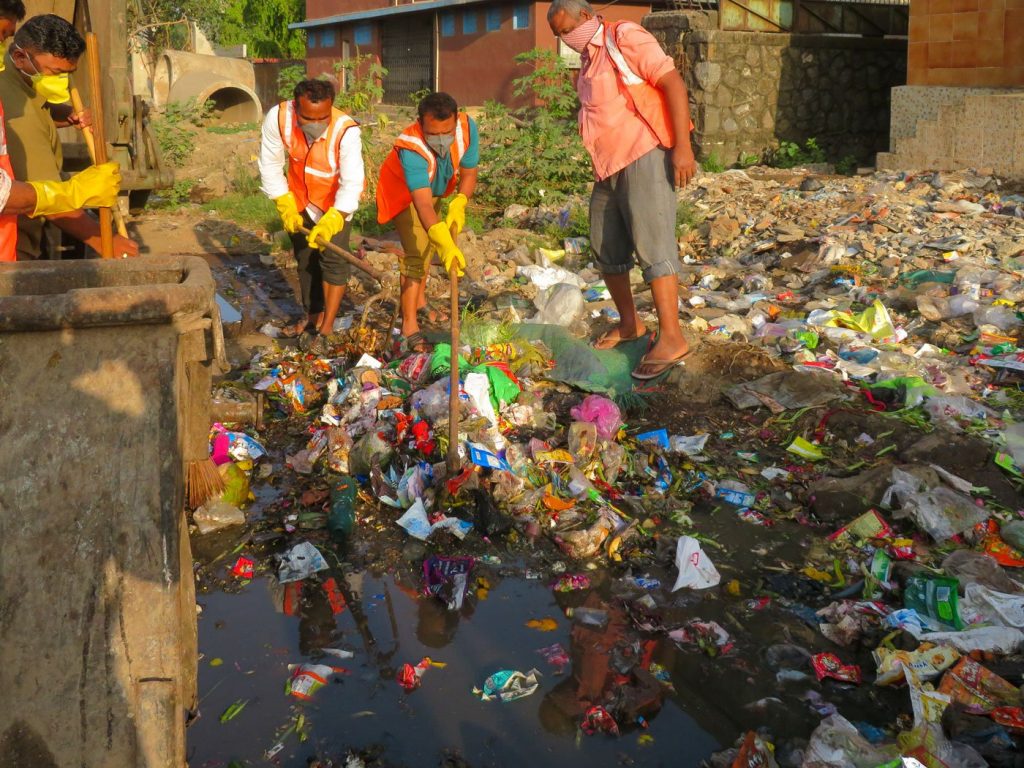 For Anita Ghotale, Saturday, March 21 was a usual day at work – though many  shops in the city were shut, the markets deserted, the streets quiet. With the lockdown measures put in place by the government due to the spread of Covid-19, many were staying shut in at home in Mumbai that day.

But Anita was cleaning those quiet streets, sweeping away sludge-like garbage from accumulated dark and dirty water. Some of the filthy water splashed onto her legs. “For us, every day is risky. Not only now because of this corona, but [it’s been like this for us] from many generations,” she said.

It was around 9 a.m., and she had been at work for two hours, sweeping the streets and pavements in M-West ward in Mahul village of Chembur in eastern Mumbai.

What about her own health in this grim situation? “We got these masks only yesterday [on March 20], that too when we demanded them due to the virus,” she said. A mask was tucked into the waist of her saree, and 35-year-old Anita was wearing a scarf around her neck for protection. “These masks are thin and not reusable [after two days of wear],” she said.  No signs of gloves, and protective footwear like sturdy boots is unheard of in her line of work.

Anita belongs to the Matang community – listed as a Scheduled Caste in Maharashtra – and says her family has been engaged in sanitation work for generations. “My grandfather used to carry human shit on his head from open gutters [in Mumbai],” she says. “Be it any generation or year, our people have always had to fight for their rights as human beings.”

To make matters worse, Mahul, the area where Anita lives and works, has for some years now been in the news for its high levels of air toxicity due to the nearby chemical industries and refineries. 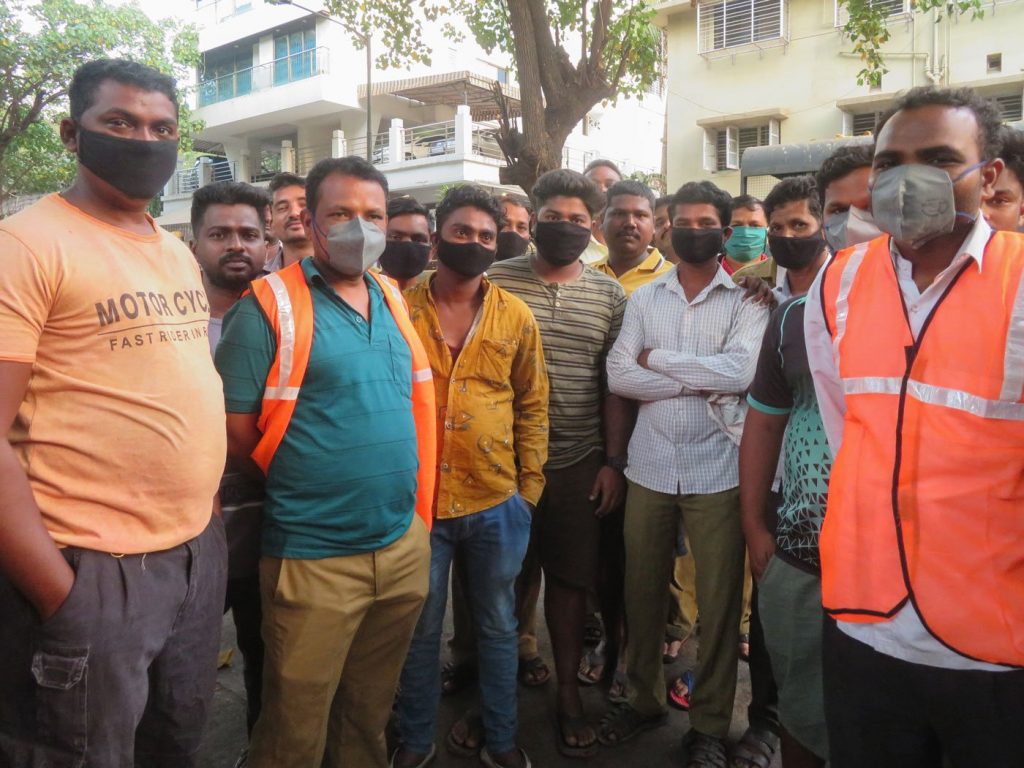 On Saturday, like on all their work days, safai karamcharis gathered at 6 a.m. at the chowki in M-West ward, ready to start another day of cleaning, at great risk to themselves. | Image courtesy Jyoti Shinoli / People's Archive of Rural India 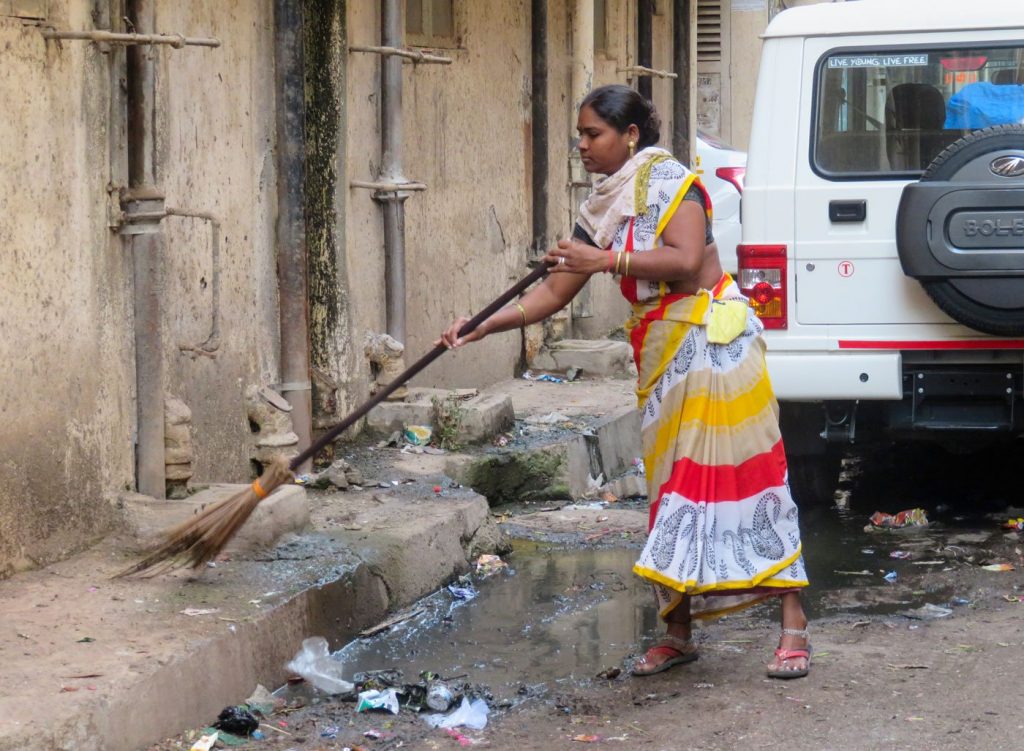 Among them is Anita Ghotale, who says, 'We got these masks only yesterday [on March 20], that too when we demanded them due to the virus’ | Image courtesy Jyoti Shinoli / People’s Archive of Rural India

Anita and her family were shifted here in 2017 from Vikhroli East in north-eastern Mumbai, as part of a Slum Rehabilitation Authority project. They live in a one room-kitchen tenement in Subhash Nagar. Their cluster of 6 to 7 storey buildings is barely 15 metres across the road from the BPCL (Bharat Petroleum Corporation Limited) refinery.

Over the last decade, 72 buildings comprising 17,205 tenements for over 60,000 people came up here as colonies of ‘project affected persons’. People were re-settled here after being displaced by various projects in the city. Due to their proximity and constant exposure to heavily polluting industries, residents here have reported high levels of ailments such as breathing difficulties, lung-related issues, coughs, eye and skin irritation.

After prolonged protests and petitions in the courts, in September 2019, the Bombay High Court ordered the municipal corporation to pay Rs 15,000 as transit rent to the families until alternative rehabilitation is made available. But, says Anita, "The BMC has done nothing in the last four months. My six-year-old son Sahil often falls sick and has breathing problems due to this dirty air and smell of chemicals. I don't know what we will do if the virus arrives here.”

Anita earns Rs. 200 as daily wages; as a contract worker, she is not paid on the days she cannot work. And she hasn’t received her wages for three months. The contractors, she says, often don’t pay on time, saying the money is held up at the Solid Waste Management Department of the Municipal Corporation of Greater Mumbai – Anita’s employer for the last 15 years.

Her two daughters and two sons study in a municipal school in Mahul. Her husband, Naresh, 42, sells garlic door-to-door in the colonies of Chembur – and barters it for discarded plastic items that he then sells to a scrap dealer. Her mother-in-law segregates plastic from piles of garbage in Chembur, which she too sells to scrap dealers.

“The three of us together earn not more than 5,000-6,000 rupees every month,” Anita says. With this amount, the seven-member family manages their monthly ration, electricity bill, other expenses – and various illnesses and healthcare.

But with Anita’s delayed wages, it gets even harder to stretch the family budget every month. “The government is asking employers to pay advance wages to labourers,” she says. “But, what about our dues pending for months?” 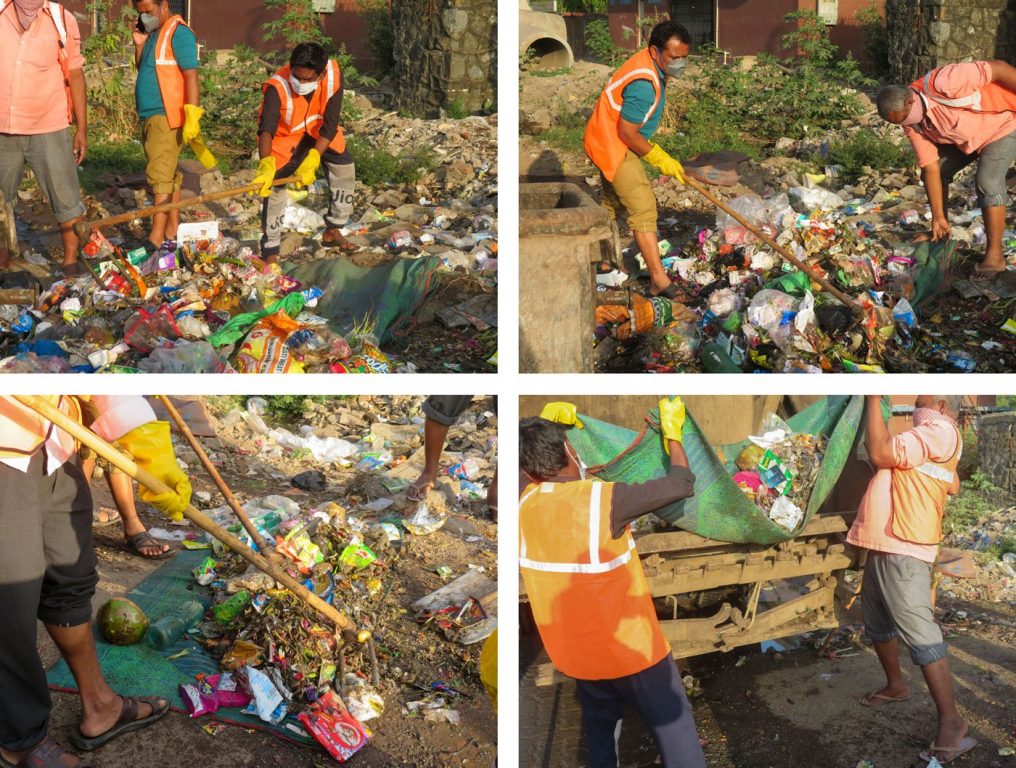 The garbage that Katin Ganjey (top left, in black shirt) and his co-workers pick up contains various hazardous items. Despite repeated demands, they are given barely any protective gear. 'Risking our life is not new for us', Katin says. 'But at least because of this virus…think about us' | Image courtesy Jyoti Shinoli / People's Archive of Rural India

Around half a kilometre from where Anita is working, at a garbage collection point in the same ward, Katin Ganjey is standing amid a pile of garbage, wearing only chappals. Like Anita, he too is a contract labourer hired by the municipal corporation’s Solid Waste Management Department. The city corporation hires 6,500 workers on contract, says Jaywant Pradkar, the chief supervisor of that department.

The garbage that Katin is picking includes broken pieces of glass, rusty nails, used sanitary napkins, and rotting food. He gathers these and other hazardous waste items together with a digging fork at the end of a bamboo stick, and heaps them on a plastic mat. Then he and another worker – there are five men in the team – lift the mat and throw all the waste into a garbage truck.

“We got these [rubber] gloves only yesterday [March 20],” says 28-year-old Katin, who also belongs to the Matang community. Usually, he handles the garbage with his bare hands. “These are new gloves, but see – this one has torn. How do we keep our hands safe in this kind of garbage with such gloves? And now there is this virus. Are we not human?”

It is 9.30 in the morning, and his task is to clean 20 garbage points till 2 p.m. in various parts of Mahul. “Risking our life is not new for us. But at least because of this virus you [the municipal corporation and the government] should think about us,” he says. “We are here in this garbage for the public, but will people think about us?”

For his job with innumerable risks, Katin earns Rs. 250 a day. His wife, Surekha, 25, is a domestic worker. 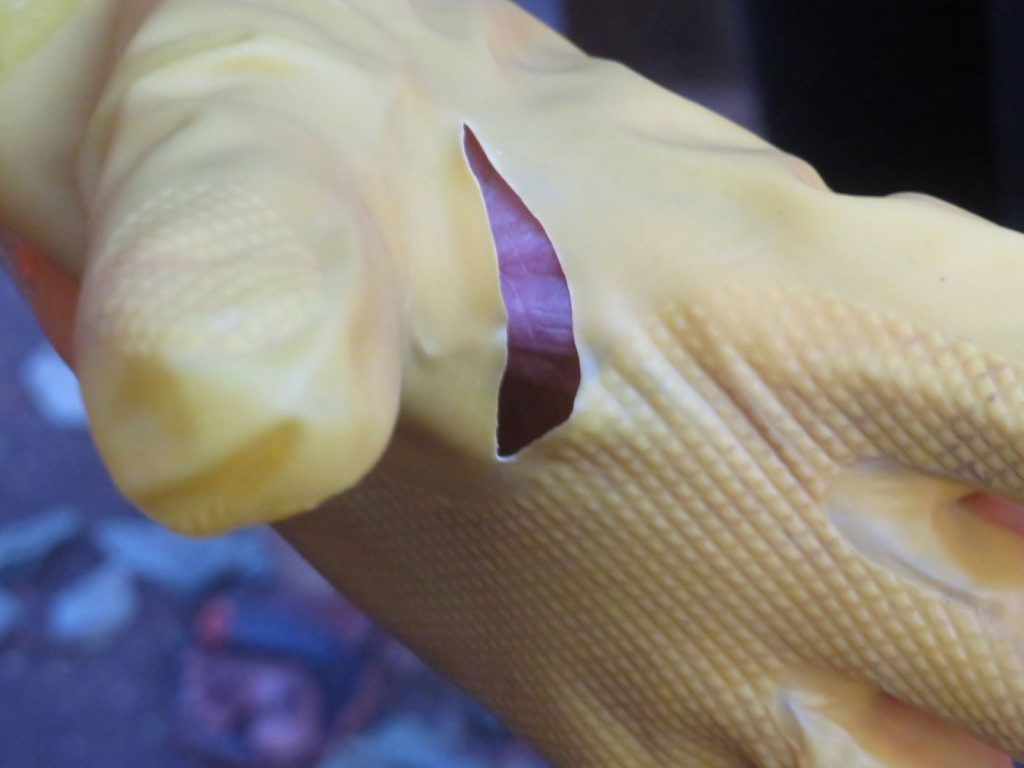 We got these [rubber] gloves only yesterday [March 20]’, Katin says. “These are new gloves, but see – this one has torn. How do we keep our hands safe in this kind of garbage with such gloves? And now there is this virus. Are we not human?’ | Image courtesy Jyoti Shinoli / People’s Archive of Rural India 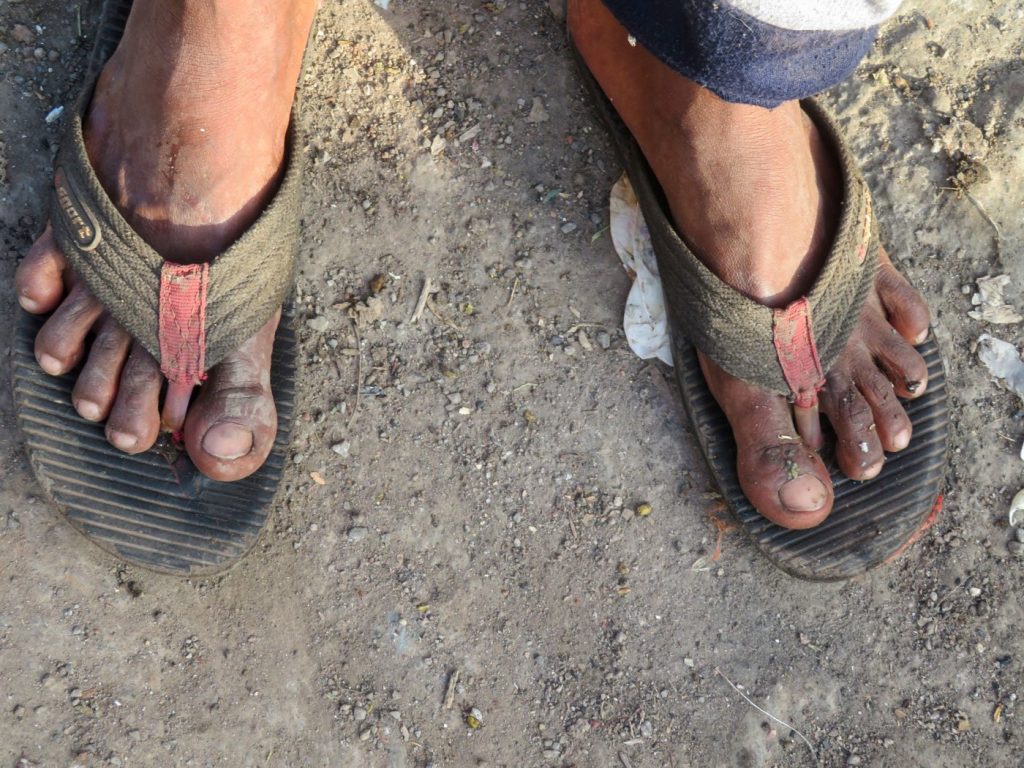 The corona virus is new to the city, but not his and other sanitation workers’ repeated demands for a secure and permanent job, health insurance, and a regular supply of safety equipment like face mask, gloves and shoes.

The need for protection is now even more urgent. On March 18, a letter sent to the municipal commissioner by Kachara Vahtuk Shramik Sangh – a Mumbai-based organisation that works for the rights of safai karamacharis (sanitation workers) – demanded adequate safety equipment for workers on the ground.  On March 20, a few workers were given a mask each.

“Due to the virus, we requested that the BMC authorities give us soap and sanitiser for the workers on the garbage trucks, but we got nothing,” says Dadarao Patekar, 45, who works on trucks in M-West ward, and is a Nav Bauddha (Neo Buddhist)). “Workers who are cleaning the dirt of others should get regular health check-ups. They are at a higher risk of infection by the virus.”

However, Pradkar, the chief supervisor, says, “We have given good quality masks, gloves and sanitisers to all our workers. And are ensuring their safety seeing the growth of the virus.”

The numerous shutdown measures announced on March 20 by Maharashtra Chief Minister Uddhav Thackeray to prevent the spread of Covid-19 were further extended on March 22 to a near-total lockdown, except for essential services. At the time of reporting for this story, on March 21, safai karamcharis, both permanent and on contract, continued to gather at 6:30 a.m. at the chowkies in the city’s wards, where their attendance for the day is registered and they are assigned cleaning spots. 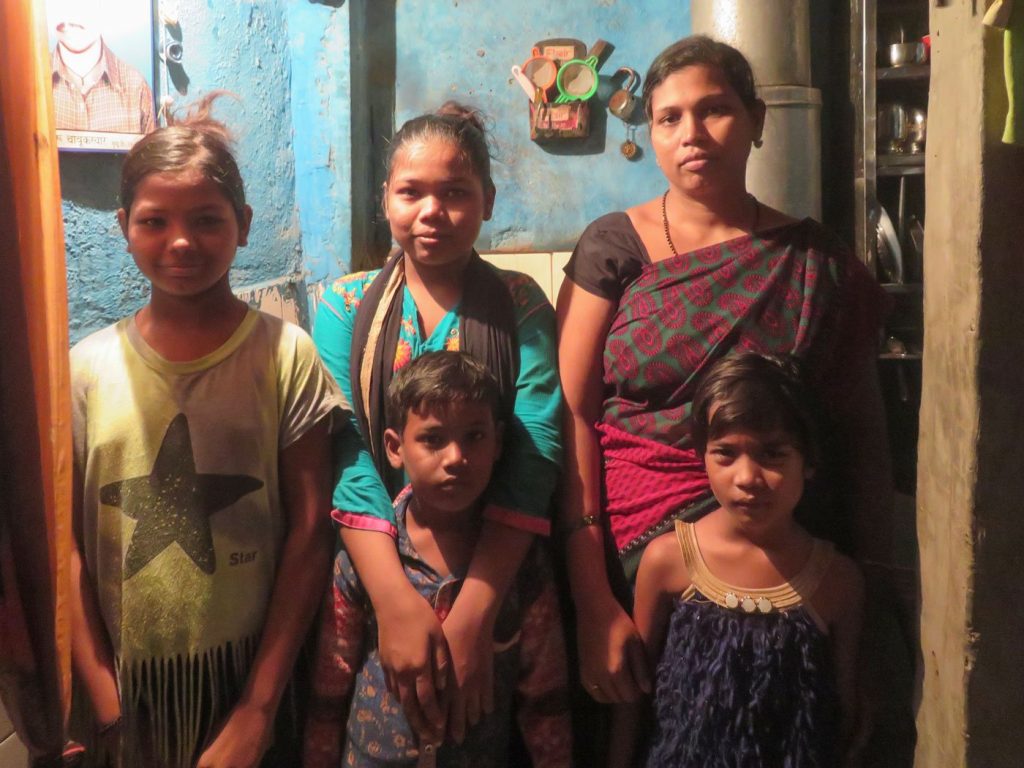 Archana Chabuskwar and her family in their home in the Anand Nagar slum colony. | Image courtesy Jyoti Shinoli / People's Archive of Rural India 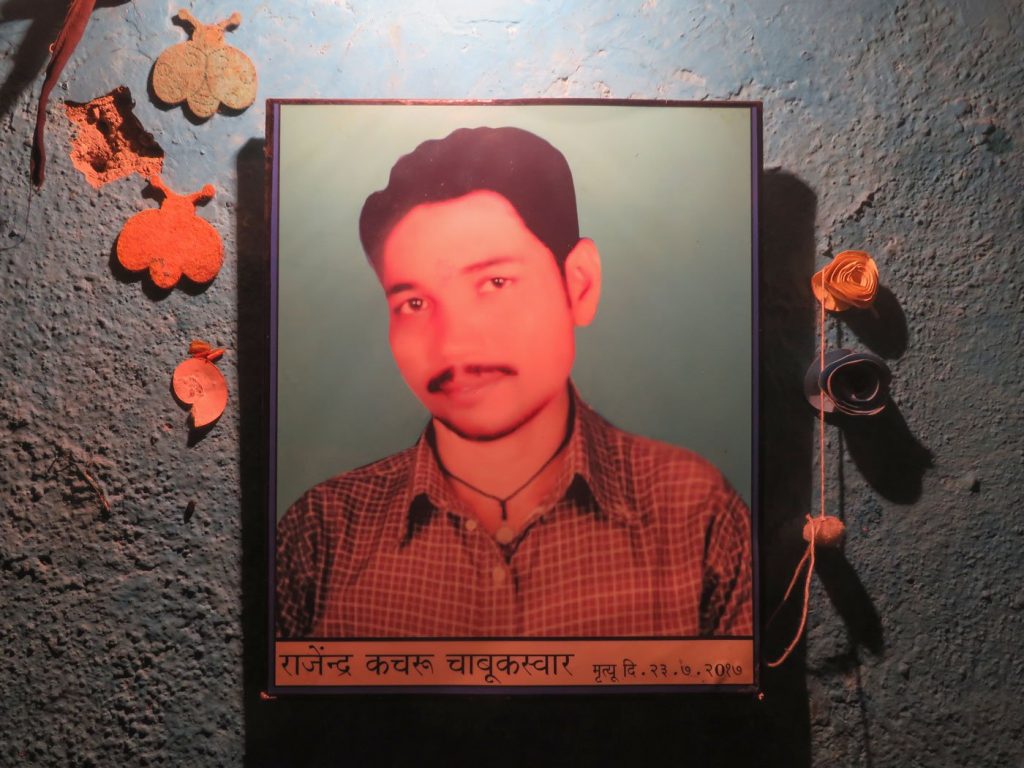 A photograph of her deceased husband Rajendra: 'How do we clean hands constantly? The water comes here every two days. And who can afford that liquid [hand sanitiser]?’ | Image courtesy Jyoti Shinoli ? People’s Archive of Rural India

“Our work is part of essential services. We have to come out. Like soldiers on the border who are protecting us, we safai karamcharis have to protect our citizens,” says Patekar.

But how will the sanitation workers protect themselves? “The government is saying clean hands constantly. How do we do that? The water comes here every two days. And who can afford that liquid [hand sanitiser]? We have to share a public toilet with hundreds of people,” says 38-year-old Archana Chabuskwar, who is also from the Nav Bauddha  community. She collects garbage every day from more than 40 households in the Subhash Nagar locality, and earns Rs. 200 as daily wages.

Her 100 square-foot home is in a narrow alley in Anand Nagar in Chembur, around four kilometres from Mahul's Subhah Nagar. The slum colony is home to several families of safai karamcharis,  many of whom came here from Jalna, Satara and Solapur during the 1972 drought. Some years ago, Archana’s husband Rajendra broke his leg when it got crushed under a heavy metal garbage bin that he and other workers were trying to pick up. He died in 2017 due to a lung ailment.

“Our people die all the time anyway, but no one asks about us,” says Archana. “What difference does it make if we now die of the virus?”

This article was originally published in People's Archive of Rural India on March 23, 2020.