Speaking Up
How RSS and outfits like it breed immorality
March 31, 2020 Ajay Gudavarthy 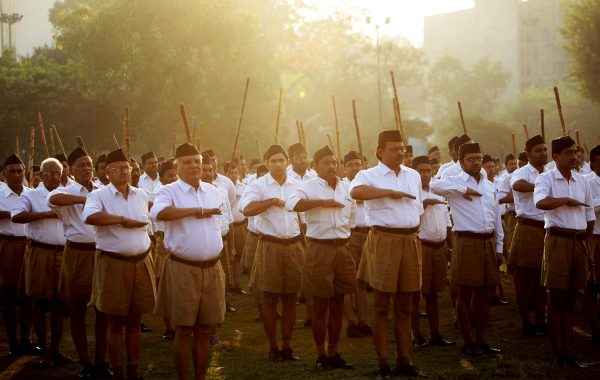 The RSS is generally perceived to be morally upright; much of this perception comes from the fact that full-time members of the organisation are ascetic and also claim they maintain a distance from personal possessions and from the pursuit of power. They denounce power and claim to assume an advisory role for the purpose of ‘nation-building’. This kind of optics fits well with the dominant morality, which is suspicious of politics and comprehends personal family ties as narrow and driven by self-interest. They are active during humanitarian crises and natural calamities, such as the one we are witnessing now, with the spread of Covid-19.

This first-order idea of public morality is, however, maintained by building a layered reality and multiple narratives and practices that are not only not moral but are also patently immoral. Yet, how does RSS in particular and right-wing organisations in general maintain a favourable opinion?

Conservative organisations are precariously located between absolutism and debauchery. Their idea of morality is one of absolutism, which is visible in their asceticism and eschewing of anything that is remotely identified as pleasurable. This basic idea is then followed up by an understanding that a majority in any society does not live up to this absolutist idea of morality, and are, therefore, necessarily immoral.

Moral-immoral is a zero sum game, where nothing exists between an absolutist idea of morality and debauchery. Those who do not live up to absolute moralism are necessarily immoral. They perceive their own practice of morality as one under constant stress, and faltering, and therefore needing a strong ideological and organisational structure that is strict, hierarchical and disciplinarian.

So it swings from one extreme of absolutism to the other extreme of cynicism, in the belief that nobody is actually capable of living by any kind of moral value system and therefore, those who claim to uphold the moral values of working for the collective good are either dishonest or living in a fool’s paradise and therefore need to be either exposed or punished.

The operative logic of such an understanding is that society is weak as long as collective ideals are based on, or left to, individual morals. No individual is above suspicion and vulnerability—as we witnessed during demonetisation. It is this logic that works to undermine public and democratic institutions. Those working the institutions are actually hiding behind the fig leaf of procedure and cover up real-time intentions they hold. We could see this being demonstrated in the way every possible institution and individual running them are systematically undermined, put under pressure, and made to succumb. This is then seen as a vindication of the fact that individuals are not capable of upholding moral values.

In undermining institutions and “exposing” individuals, conservatives feel they are actually strengthening the social ethos by cleaning up and purging hypocrisy.

At the other end of the spectrum, this logic works itself in self-justifying every kind of blatantly immoral action or means they resort to—using the “cunning of reason” is a justified means to expose latent hypocrisy. From an imagined idea of upholding an absolute morality, much of the Right’s practice, in its everyday forms, becomes blatantly opportunistic and immoral. It does not mind spreading falsehoods, lies, falsely implicating those they stand opposed to and even using physical threats and deploying violence. Means, therefore, do not matter in establishing a social order based on that imagined “original position” of absolute morality that is either to be established or existed in an ancient past.

A third and perhaps most insidious and ominous dimension is when they actually face individuals who have remained steadfast in their public life and stood for collective values with conviction. Here, the conservative Right either fears them or sees them as a reminder of their own shallowness and thereby ends up vociferously hating them. The way the current regime has treated public activists such as Sudha Bharadwaj, among others, is a case in point. Such activists break the chain of equivalence that the Right has conjured up for itself. They are honest but disagree with the Right. They become a ‘threat to national integrity and security’. Here the question of morality is converted from a social to political and then to a question of crime. Criminality is beyond reasoning—and so it is a threat to the nation. Criminality is the afterlife of moral absolutism of the Right. It is again in the name of a higher order that punishing such activists becomes justified. In any case, this is how it is projected for larger mass consumption.

In its understanding that human beings are morally vulnerable, the Right actually and actively creates vulnerability. In its fear of honesty it creates conjured-up criminality. And in its imagination of higher ideals it continues to justify everyday dishonesty. The Right not only feels justified, but feels that the majority would fall in line because of their own inability to pursue moral absolutism. They would celebrate “exposing” individual vulnerability of those in higher offices because it reveals an underlying reality that was hidden under rules and procedures. The Right also believes that unless this “sham” is not exposed there would not be enough consent for its falsehoods, violence and majoritarian constructs; nor a justification to find for treating some individuals and social groups as lesser or second-class citizens.

Liberal democracy and liberalism are founded on the reasonable pursuit of morality as enlightened self-interest that locates one’s own interest in the context of the necessity for collective living and mutual cooperation. As long as individuals are not blatantly unreasonable and immoral in pursuit of their self-interest, there is no compulsion or even need of absolutist morals. Rules and procedures are meant to protect collective practices from individual vulnerabilities. The Right upturns this logic of reasonableness into one of blatant hypocrisy and reads them as modes of preserving self-serving interests and entitlements. Here its reading by default becomes anti-elitist but works to preserve privileges through prevalent social systems such as caste and gender.

The question that should really interest us in this global context of the rise of Rightist conservatism is how the mass of people cutting across castes and classes perceive their constructs. Do they see reflected in it their own story, of being belittled or feeling short-changed by liberal values, and thereby do they read the Right’s subversion of institutions and undermining of individuals as a necessary corrective to a process that has made them feel inferior and morally burdened? Or is there a possibility of the majority feeling distanced from blatant immoralism as that does not reflect their everyday reality?

The everyday reality of the most vulnerable is constituted by both compassion and pragmatism. While the pragmatism of the Right is organic, the violence it conjures up is not, and this is where the hope of its rejection lies.

First published in NewsClick.
The author is associate professor, Centre for Political Studies, JNU. The views are personal.