The Karnatik world and its makers

Through his latest book, Sebastian & Sons: A Brief History of Mrdangam Makers, Karnatik musician T M Krishna documents the life histories of those legendary artisans and their families, who’ve involved themselves in the making of the the mridangam for years. Told through extensive ethnographic research, the work contributes to the author’s dedicated and continued exploration of how caste functions within the Karnatik music industry. Mridangam is the primary percussion instrument in Karnatik music but its makers, Sebastian and others, are hardly remembered or celebrated in history, because of their social position, most of them Dalit Christians.

On February 2 2020, Chennai’s Kalakshetra Foundation withdrew permission to hold the launch of the book, just some hours before it was scheduled to happen. In an official letter that was published the next day, the Foundation said that the decision was taken because the book touched upon “controversial issues” and made statements with “political overtones”. Ironically, this only reaffirms all that Krishna has been trying to say about the deep regressiveness that is characteristic of the Karnatik music industry.

The following are some significant excerpts from the book. 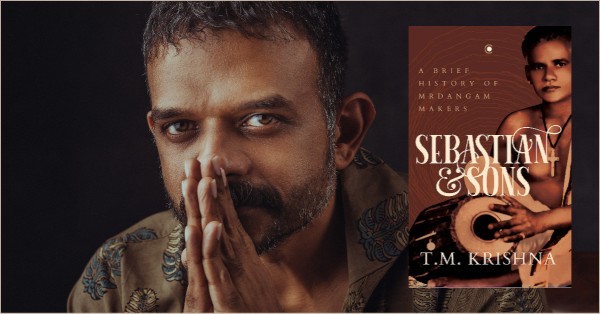 I began my research with the citadel of Karnatik music: Chennai. I was not then consciously looking for mrdangam makers in other states. It took me a while to realise that there was much to explore beyond the confines of Tamil Nadu. I read and re-read transcripts of my conversations with makers and artists. Every reading gave me new insights and threw up passages that I had overlooked thus far.

When I spoke to T.V. Gopalakrishnan, he briefly mentioned a maker’s enclave in the suburb of Palarivattom in Ernakulam. Like the Thanjavur makers, they were also from the paraiyar community and had converted to Christianity, he had said. Gopalakrishnan recalled that, when he was around six years old, Thomman, who was then in his thirties, used to come to his house to work on mrdangams. The maker’s son, Sowri, had even come to Chennai and worked with Gopalakrishnan. ‘They were three or four brothers. Their names were John, Jacob or something. And then there was also Chandy from the same family. They must have learnt it the traditional way, maybe from Thiruvananthapuram, which has an older tradition.’

Speaking of people who worked in Thiruvananthapuram, Gopalakrishnan mentioned others like Parameshwaran, and said, ‘But they are not paraiyans. They worked at the palace, right? So it is not possible (that they were paraiyans),’ he said. He remembered that Parameshwaran had moved to Bangalore and worked there for a very long time. A few months later, I met P.V. Parameshwaran’s son Krishnakumar at his Bangalore home. They were the family who took care of all suddha maddalam and mrdangam needs at the Thiruvananthapuram palace. Krishnakumar retold a story about his grandfather P.K. Vellai and great-grandfather Karuppusami.

‘The king was very interested in my grandfather, but his bodyguard was jealous of the recognition my grandfather received from the king. So my great-grandfather (Karuppusami) plotted to give the bodyguard some mrdangam work. One day, he told my grandfather (Vellai) to stay at home and said he would go to the palace alone. On that day, on the king’s insistence, he had to go to pull varu for the suddha maddalam because there was a concert to be held on that very day. My great-grandfather informed the king that there was no one to help him. The king said, “My bodyguard is strong; he can help.” After that day, the bodyguard was absent for a week. My grandfather demonstrated that it was not just about strength, it was in the technique. You need to know how much to pull. They used to say that, if my grandfather pulled varu for the suddha maddalam, a vibrating sound would emanate from it even if a fly hovered over it.’

Just as the Thanjavur makers initially only made tavils, Karuppusami’s ancestors were suddha maddalam makers for three or four generations. It is from Vellai’s time that mrdangam-making became their livelihood. This makes sense historically, because it is only over the past 120 years that Karnatik concerts have proliferated in public spaces—exponentially increasing the number of participating musicians, and thus the demand for mrdangams. As Bharatanatyam too became the face of Indian ‘classical’ dance, the demand for mrdangams even quadrupled. From all that I have heard, it appears that the suddha maddalam and mrdangam makers who were engaged at the Thiruvananthapuram court, and later on in music colleges and by professionals in the city, came from a little village called Peruvemba, about 20 kilometres from Palakkad. Locals might have also been employed, but it was makers from Peruvemba who dominated the show.

I drove in and around Palakkad, and was strongly reminded of the Thanjavur belt, except for the low-lying hills in the background. We (my student Vignesh and I) had an appointment with P.R. Kasumani. His son K. Rajesh coordinated the interview, but warned us many times over that his father does not really speak much, that he would say very little. We persisted, and since P. Krishnakumar from Bangalore had also recommended our case to his cousin Kasumani, he reluctantly agreed to meet us along with his paternal uncle P.V. Ramakrishnan.

Though the family had settled in and worked out of Peruvemba, they actually belonged to Pallavur, which is about 13 kilometres away. Pallavur was their taravad, the ancestral home. We were extra vigilant so as to not miss the village, and  were in touch with Rajesh on the mobile phone too. This was all unnecessary. As we meandered through the narrow two-lane roads of Kerala, we were suddenly greeted by the sight of fresh bull skin stretched and nailed to the ground on one side. I had never seen anything like this. So far, I had only seen such skin work done in closed compounds or on backstreets. Evidently, we had arrived at Peruvemba, the hub of mrdangam and chenda makers.

I realised that we were discussing two tenuously connected worlds: the upper-caste performance and learning environment on the one end and the marginalised mrdangam maker on the other. They overlap only for convenience, and remain socially and aesthetically disengaged. This separation conveniently reinforces the brahminical lie that caste is varna (occupation – or ability – based social hierarchy) and not jati (birth-based social hierarchy). And this results in cultural ‘othering’.

After spending nearly one-and-a-half hours with the family, and sharing some lighter moments over tea, I broached the sensitive question of caste. All but Kasumani were willing to speak on this subject. Krishnakumar had told me in Bangalore that they were tholkollans who came under the vishwakarma umbrella. I had read that kollans specialised as iron smiths. But they are also further subdivided into groups such as theekollan, kadachikollan, tholkollan, theeporikollan and perumkollan. Tholkollans would have traditionally worked with skin, so their entry into the mrdangam-making sector is not surprising. Today, the kollans are classified as Other Backward Castes. Interestingly, in both the state government’s Backward Classes Development department and the Kerala Public Service Commission websites, tholkollans are not placed within the vishwakarma ambit; they are mentioned separately.

When this discussion emerged at Kasumani’s residence, there was a lot of debate and confusion. Were they perumkollans, kadachikollans or perhaps kadayan (a Scheduled Caste)? Opinions were divided. Ramakrishnan was sure they were not kadayan, because kadayans were those who dived into the seas for pearls, and vishwakarmas did not do that. I was later told by a friend that all this confusion may be the result of a local issue. Apparently, at the school level, at times, children belonging to the kadachikollan community get categorised as kadayan. Later, using this, they obtain a kadayan certificate and benefit from the Scheduled Caste categorisation. Naturally, objections had come from the kadayan community. Whatever may be the case, the tholkollan community is placed in the lower rungs of Kerala’s complex caste design, though definitely above the kadayan community.

After Karuppusami’s family established themselves as the leaders in mrdangam-making in ‘God’s Own Country’, others joined in. In Peruvemba itself, another family has been at it for three generations. Another Velayudhan and his children are on the job. They too have taken over other territories and established themselves in places such as Thiruvananthapuram.

There were many times during my interviews that I wondered about where pursuing a quest becomes plain insensitivity. When do I stop a line of questioning? How much do I push? Is it even correct to ask delicate questions of people who were not born with my privileges? Is my caste privilege blinding me? How do I place myself within the discussion? I am still to resolve these quandaries.

Kasumani and family were the last mrdangam makers I interviewed in my three-and-a-half-year journey of trying to learn about makers and the making, and they were distinctly different from most others. I might have been a well-known Karnatik musician, but they knew only too well that this made no difference to their complicated life. Hence there was no hoo-hah about my arrival. And this meant that, perhaps for the first time in a very long time, I was part of a conversation where I found myself self-conscious, seeking recognition and legitimacy.

These are excerpts from Sebastian and Sons: A Brief History of Mrdangam Makers written by T. M. Krishna, and published by Westland/Context, Jan 2020. Republished here with permission from the publisher.
T M Krishna is at the forefront of Karnatik music in India today and is known in the musical world as a classicist. His tremendous stage presence, great scholarship and ability to transcend cultural borders makes Krishna a great ambassador of Karnatik classical music. Besides performing, he is also involved with many organizations whose work is spread across the whole spectrum of Karnatik music, including research, archiving and documentation; taking Karnatik music to smaller towns and villages; conducting youth festivals; supporting artists from rural south India and spotting youth talent and giving them opportunities.