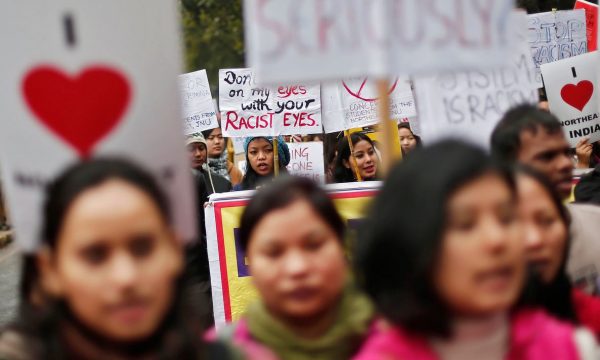 As Janata Curfew came to an end yesterday at 9 pm, Rameshwori, just like many others, stepped out of her single-storey apartment at Vijay Nagar, North Delhi to buy groceries. On her way back home, she was stopped by a man who reportedly passed lewd remarks at her. As she objected, the man, supposedly in his 50s, spat on her and called her ‘corona’ [virus] before fleeing on his two-wheeler. Rameshwori says that she has been traumatised because of the incident.

"The pan Masala spit was splattered on my T-shirt, neck and it went into my eyes as well. It could have been dangerous. I was terrified," she told NewsClick. An FIR has been registered under IPC Section 509 at Mukherjee Nagar police station and investigation is currently underway.

However, this is not the first such incident. Christina Ering, president of Northeast Students House for Women, Delhi University, said that only a few days ago, a group of men shouted, “Yeh dekho Corona jaa rahi hai! (Look, here’s corona!)” while pointing at her.

"It happened in front of many people and nobody intervened. It was humiliating," Ering said.

Another student from Delhi University talked about how she and her friends were mocked recently for being “Chinese”. They reportedly said: “You are the real coronavirus and people should stay away from you."

"I complained to the metro authorities, but no action was taken," she said, requesting anonymity.

Amid the novel coronavirus scare, a new wave of racism and xenophobia seems to have surfaced. Ering believes that the virus has become an excuse for the people to act in a racist manner. "It is not that racism has started because of cornoa. We were already called momos, chinki, etc. This is now just a new excuse," Ering told NewsClick.

India has so far seen over 400 confirmed cases and eight deaths from COVID-19, which is reported to have originated from China. There are multiple testimonies of people from Northeast India who have been derided as “carriers of coronoavirus” and labelled "Chinese" based their physical features.

A day ago, six women and three men from Nagaland were forced to spend 24 hours in quarantine in Gujarat even after showing no symptoms of the disease, no foreign travel history or contact with any COVID-19 suspect. As per the report by Scroll.in, the victims have alleged that the incident was owing to “racist reasons”.

These incidents have given rise to more anxieties among the people from the Northeast.

"I understand that people are generally worried and when they ask us questions. We don't mind because we understand that they come from a section of the society that is underprivileged and have not been exposed to education and they genuinely want to know. But there are people who are educated; who are exposed to all the information and still they are behaving in a racist manner," Ering said.

Meanwhile, Ministry of Home Affairs (North East division) has issued a notification urging all law-enforcing agencies to take appropriate actions in cases of harassment" against Northeastern people. The notification reads, "It has come to the notice of Ministry that people from North East have been facing harassment after the occurence of COVID-19 in the country. There have been cases where people from North East including the athletes and the sports persons have been harassed by linking them COVID-19. This is racially discriminatory, inconvenient and painful to them."

"In so many years of Independent India, by now, people should know that there is a portion in India which consists of Northeastern people who look slightly physically different from them. Even if there are Chinese people around, that should not be a reason to be a racist. Racism is simply unacceptable. This Corona is just another excuse to put us down," Ering said.