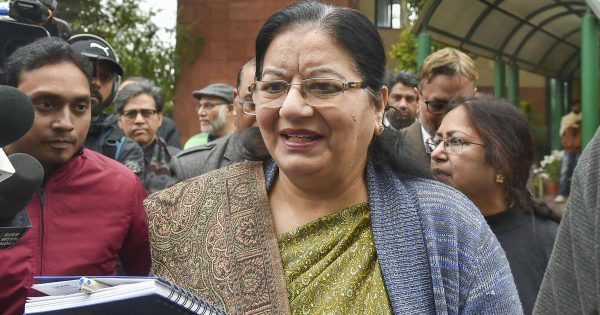 Ramakrishna Ramaswamy – a member of the 2018 search committee which was given the task of looking for candidates to be appointed as the Vice Chancellor of the Jamia Millia University in Delhi – has written to the President of India, Ram Nath Kovind, requesting him to recall the appointment of Dr. Najma Akhtar who currently hold the VC position at the university, reported The Indian Express. The President had approved her appointment on April 11, 2019.

In his letter to the President dated March 8, Ramaswamy claimed that the Central Vigilance Commission (CVC) had denied vigilance clearance to Akhtar in an office memo dated January 10, 2019.

Though his letter did not clearly state what objection the CVC had or why it denied vigilance clearance to Akhtar, it quoted newspaper reports which had claimed that the CVC opposed the recommendation of Akhtar for any post-retirement assignment or re-employment in any organization, institution or university under the ambit of the Human Resource Development Ministry.

In the letter he added, “This is a grave matter, since in the process of arriving at a short-list, otherwise meritorious candidates were passed over by the committee on account of even the remotest vigilance clearance issues".

Speaking about how the President had earlier recalled the appointment of the VCs of the Hemvati Nandan Bahuguna Garhwal University and Manipur University, Ramaswamy wrote, “In past few months, you have shown exemplary leadership as Visitor of the Central Universities by recalling the Vice Chancellors of two Central Universities when their credentials were in question.”

“The OM of the CVC quoted above is very strong in its indictment, and under these circumstances, I am writing to request that the same caution be exercised in the case of the Jamia Millia Islamia and appropriate remedial action be taken,” the letter added.

Post her appointment as the Vice Chancellor, Najma Akhtar became the first woman VC of the JMIU. She had also raised her voice against the police brutalities on Jamia students on December 15 last year during the anti-Citizenship Amendment Act protests. She had posted a video message criticizing the Delhi Police’s actions and also held a press conference reiterating that the police had entered the Jamia campus without permission and their actions were condemnable. She had then said, “I am hurt by the way my students were treated. I want to let my students know that they are not alone in this fight. I am with them. I will take this matter forward as long it’s possible.”

Before Ramaswamy’s letter came to the fore, the Delhi High Court was already hearing a plea challenging Akhtar’s appointment as the VC of JMIU currently seized of in court. Justice AK Chawla issued notice on a plea filed by Jamia alumnus M Ehtesham-ul-Haque. Haque’s petition read, “The entire process culminating into the impugned appointment of Dr. Najma Akhtar (Respondent No.3), is a colourable exercise of power and in flagrant violation and total non-compliance of the statutory provisions of the Jamia Millia Islamia Act, 1988.”

The petitioner said that the appointment of Akhtar was done through a tainted process and her consideration and recommendation by the purported Search Committee “subject to vigilance clearance” was in itself irregular and illegal and vitiates the entire process.

The petition has sought that her appointment as VC be declared as "illegal, arbitrary, void ab initio and non est in law".

An Indian Express report on Akhtar states she was recommended for the post of the Jamia VC by the Muslim Rashtriya Manch (MRM), an outfit patronised by RSS leader Indresh Kumar. Sources in the RSS told IE that she was picked because she neither aligned to the Congress, nor the Left.

However, Akhtar confessed that she was ‘apolitical’. Earlier with the Aligarh Muslim University (AMU) as the Controller of Examinations, she had faced various allegations of ‘institutionalized corruption’. However, her track record at the JMIU shows her to be an able leader. Since the start of her tenure, Akhtar has made roughly 150 promotions and over 60 fresh appointments. She has also got UGC sanction for four new departments, and has talked of bringing in more women students.

Akhtar still faces many detractors who allege she didn’t do much post December 15. However, faculty members stood up for her saying that though she didn’t do much, the VC’s of universities were not as autonomous as before due to the pressure from the government.

Yet, the letter by Ramaswamy raises eyebrows. If there was ever a problem with her appointment, why is the demand for her removal cropping up after one year?