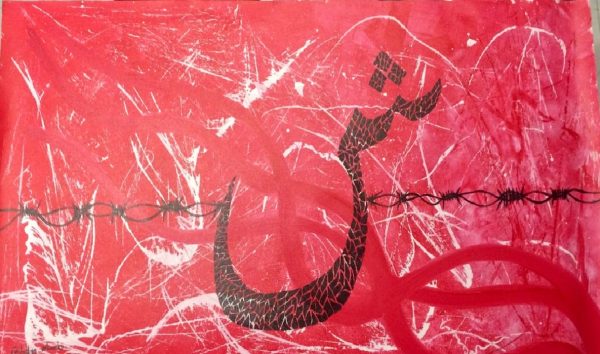 ‘The Wailing Valley- KA"ش" MIR"’ by Shafiya Shafi. There is an emphasis on "ش" which shows how shahadat (martyrdom) is embedded in Kashmir's name itself.

When Delhi decided to deploy additional security forces to Kashmir, its people started to theorise that something dangerous was on its way. Kashmiris have developed some sort of a sixth sense, they smell trouble in the air – Bifurcation of the state, war with Pakistan and the army taking over police stations – the now-erstwhile state has witnessed a fair bit.

Amidst the speculation, painter Shafiya Shafi was participating in an exhibition at Hotel Centaur in Srinagar. “Amid rumors, I thought it best to paint since the situation was unknown to everyone,” says the 25-year-old.

After the scrapping of Article 370 and Article 35A, Shafiya hit a complete block; she was unable to think straight and there weren’t concepts or ideas to engage her enough to paint.

“I used to sit in my room and stare at walls, with no contact with the rest of the world. I used to think, why do I have no news from my friends, why do I have no idea of what is happening in my neighboring lane?” she says with a deep sigh.

“I wanted to paint it but the situation became more frustrating as I had no idea how to lend my brush to this feeling of anger. It it felt like a mystery,” Shafiya says with a nod.

Shafiya’s heavy heart always beat for Kashmiris and a fate they are born into. Then, there was a clampdown, and a curfew. Her first impulse was to paint, but there was no material, and for three months she hardly did.

“After three months, I decided to paint that one thing I felt, the feeling of loneliness and death.” She titled it ‘Dead Air’. 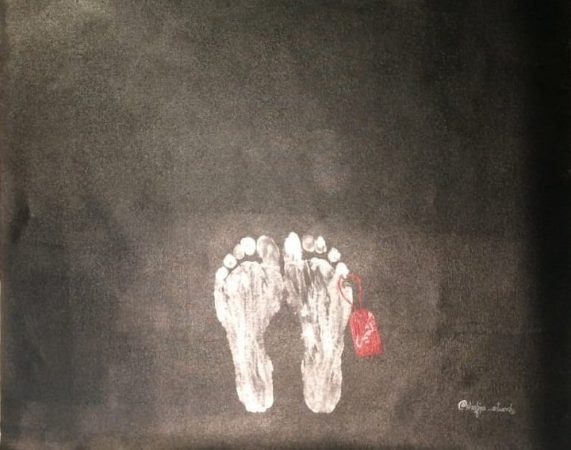 She felt a little easy after painting this piece and then started to paint abstracts.

Shafiya painted abstracts on the circumstances in Kashmir and titled it ‘The Wailing Valley- KA"ش" MIR"’. There is an emphasis on "ش" which shows how shahadat (martyrdom) is embedded in Kashmir’s name itself.

“It’s important for artists to engage with nature, travel, seek inspiration and listen to people's stories. But when the same human is confined within four walls, it becomes no worse than a prison and the artist a mere helpless prisoner. I felt worthless, questioned my existence and the fate of being born in a world like this,” she says.

On August 5, 2019, the BJP-led scrapped Article 370 and 35A that provided special status to Jammu and Kashmir and divided it into two Union Territories; Jammu-Kashmir and Ladakh.

Internationally recognized artist Syed Mujtaba Rizvi’s thoughts were not very different from the others. His studio has windows facing three sides – One overlooking the river Jhelum, the other towards the Abdullah Bridge which is always overflowing with traffic and the third overlooks at the historic Zero Bridge, with the restricted hills behind the Badami Bagh cantonment area in its backdrop.

“I spent long, long hours; days and nights, in my studio. Since there were apprehensions of a long shutdown, I had ordered new art materials, thinking that I will have a lot of time to spend in the studio but my mind went blank each time I entered the it. I would still spend a lot of time there, not doing anything, just sitting and staring at things,” he says.

Rizvi made absolutely nothing for the first 30 days. He then had to force himself into doing something for the sake of his sanity. He ended up making two small paintings on canvas and two drawings on paper; they led to more frustration.

Under siege, Rizvi used to imagine a new map of Kashmir with barbed wires and bridges that led nowhere. He drew it on paper with black ink, but kept it untitled.

In a faraway village, a 25-year-old a poet who writes in Kashmiri felt like this was jail itself. “History is witness that we have been promised to decide what we want, then why isn’t India fulfilling its promise,” says Mohammad Yousuf Mir, who writes under the pen name ‘Muntazir’.

Yousuf who hails from Ramhama in the Beerwah town of Budgam says: “For no reason, Kashmiris are being tortured, our houses raided. If the Indian government is doing it for development then I want to ask: What development? Since November 4 there is no electricity in my village”.

Yousuf who recently completed his bachelor’s degree is associated with the Sagar Cultural Forum. He says that “a poet is a society’s true eye. So, we write what we see in our surroundings. I wrote a poem in Kashmiri about the happenings around after August 5.”

Yousuf’s poems have messages and explain the plight of Kashmiris. His poems describe minor boys being illegally detained ‘…Why can’t Kashmiri’s demand for self-determination when India promised…’ In one of the couplets, he writes: “There is a complete ban on radio, television, newspapers and a ban on walking together.”

For close to six months, eight million people remained disconnected from the outside world due to the shutdown of the internet and phones. Though 2G internet services were restored recently, there was limited access to 300 sites and a complete ban on social media. 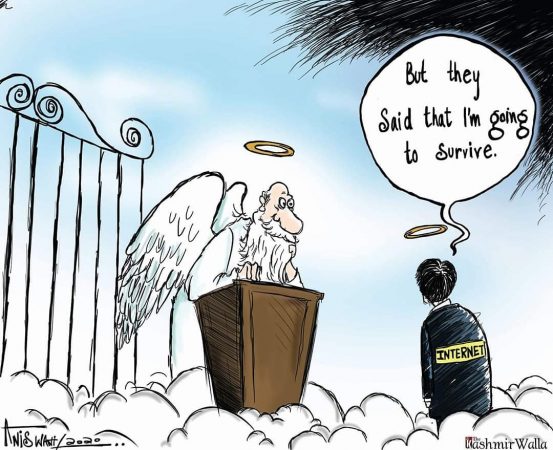 Poet Nighat Sahiba didn’t attempt to write anything in those six months. “I didn’t write anything since this tragedy happened. I used to sit in my room and just think that I had to write but I was never able to. I have not written a single line,” she says.

Nighat, who started writing at an early age, is a school teacher and a homemaker.

“In our society women are still not able to express their feelings openly and when I started writing, I thought that I will be able to express everything through my writings. But this time I felt helpless and thought how my writing will change the situation in Kashmir or the future of people?” asks Nighat.

Kashmir is a territory sandwiched between the two nuclear powers; India and Pakistan. Both countries claim equal territorial power over Kashmir.

Twenty-two-year-old Anis Wani lives in one of the volatile areas in Srinagar called Khanyar. Anis was in Kochi for an art residency and was traveling back. He was supposed to finish some personal work in Delhi and travel back home but during the night of August 4, everything changed. 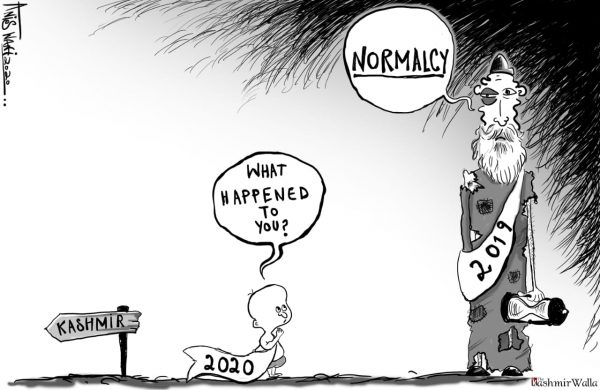 Anis Wani on Normalcy in Kashmir.

“My feelings were not different from any other Kashmiri; I was surprised, angry, and sad. I was not able to contact my family and it was depressing. The news of mass arrests including children scared me the most,” says Anis, the Editorial Cartoonist for a weekly called Kashmir Walla.

“I could feel a strange sense uneasiness when I reached Kashmir. It was as if people had given up, no one was even talking about it. I heard one journalist saying ‘I don't think anything can happen to us now, they are going to kill us all,’" says Anis, who has now resumed work after August.

Illustrator Ghazal Qadri landed in Kashmir to celebrate Eid, and spend time with her parents before she could leave for Baltimore to join her Master’s course.

“I was home and was supposed to leave in mid-August and suddenly, amid rumors, a communication clampdown hit Kashmir,” remembers Ghazal.

Known for her Kashmiri WhatsApp stickers and humor, Ghazal has rarely stayed in Kashmir due to her studies but her love for Kashmiri language and culture always pushed her to do something for it. 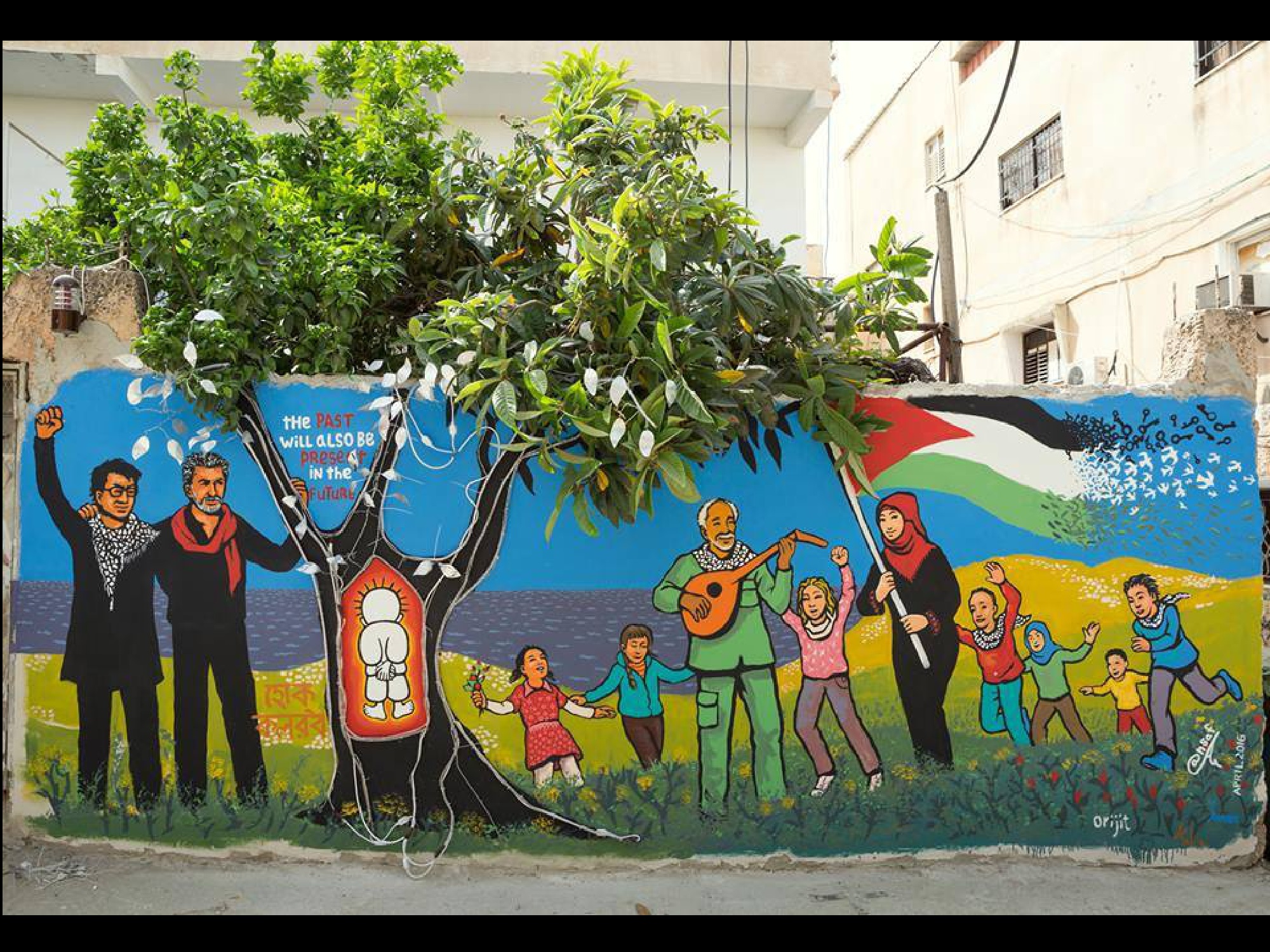 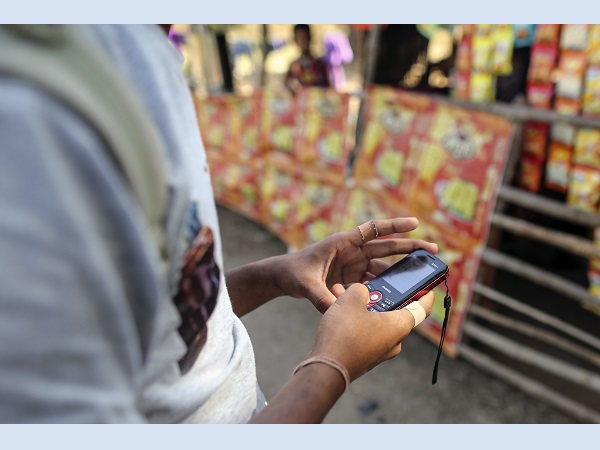