Written by Gopi Chand Narang and translated from Urdu by Surinder Deol, The Urdu Ghazal: A Gift of India's Composite Culture explores a variety of influences on the ghazal, including Sufism, Bhakti movement, and the infusion of Rekhta and Persian languages and culture. It also illustrates different socio-political and cultural demands of changing times, primarily how the ghazal provided new creative models to deal with literary movements like progressivism, modernism, and postmodernism, through works of pioneering twentieth-century poets like Faiz Ahmed Faiz, Gulzar, and Javed Akhtar.

The following is an excerpt from the chapter "The Genesis and Evolution of India’s Composite Culture" of the book. 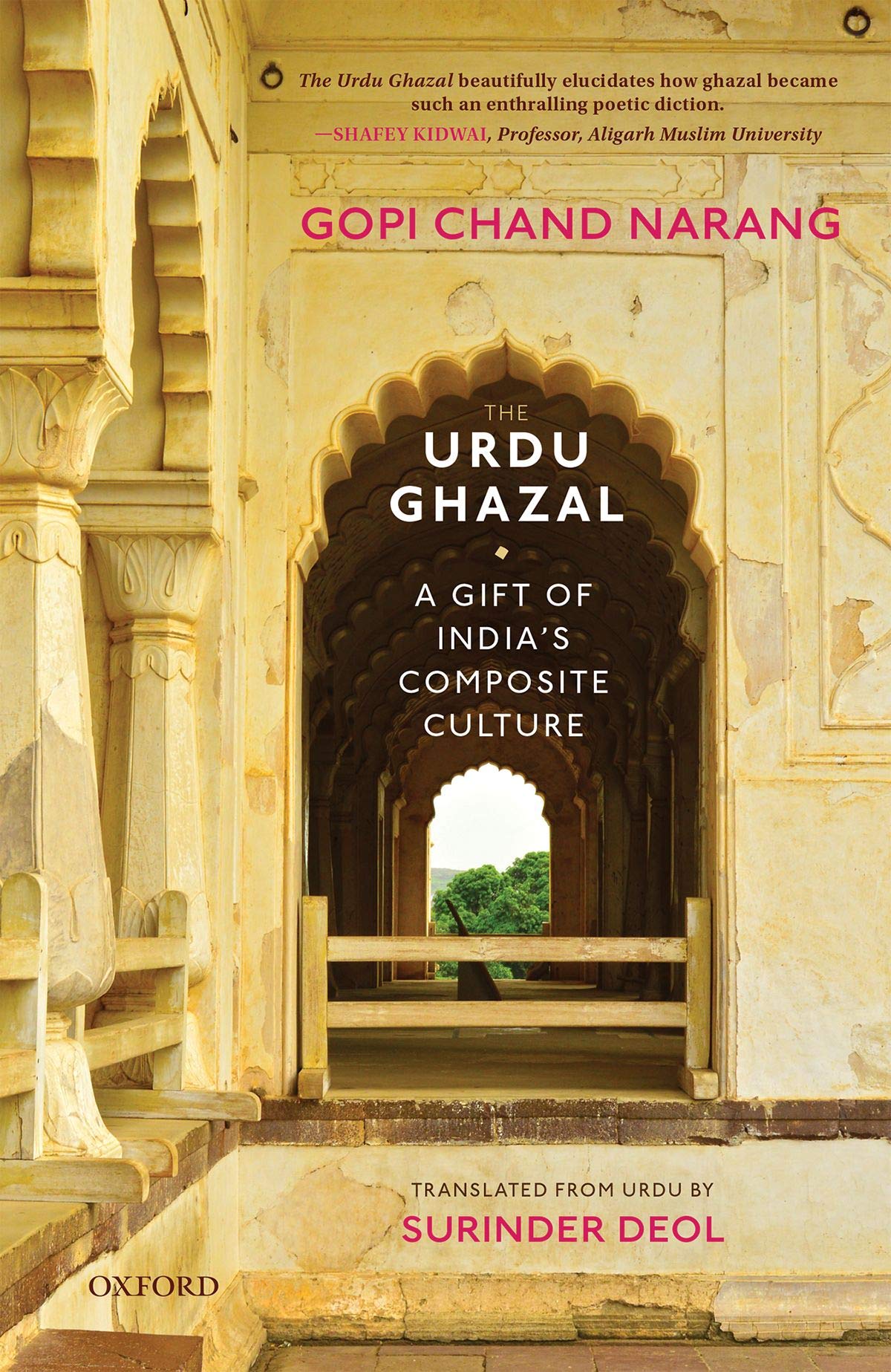 The dream of a composite Indian culture and civilization, which could not be fully realized in the realm of religion solely by the spiritual contributions of Suﬁ saints and Hindu yogis, was realized by the creative synthesis in ﬁne arts by the combined work of Hindu and Muslim artisans and artists, most notably in the ﬁelds of architecture, classical and folk music and dance, and miniature painting. During the period of the Sultanate, some composite forms of architecture had emerged. The structure of the Qutab Minar may be symbolic of Muslim architecture, but its surroundings contain Buddhist stupas, and aspects of Jain architecture are seen in the main building. Several mosques built during this time incorporated design elements of Hindu temple art, though the big domes make these elements less visible. Even the Taj Mahal represents, in the words of Husain, the ‘manifestation of the Indian concept of passionate love and a soul touched by the deep pain of separation from the beloved. It is also a symbol of India’s innate desire of peace and love and tranquillity’ (Husain 1946).

Another area where artists belonging to both communities actively participated is miniature painting. There was an old Indian tradition of illustrating walls with images of ﬁgures they adored, as in the Ajanta Caves.A similar tradition existed in Iran, and we see, in the evolution of what is called Mughal Art, traces of both Indian and Iranian traditions culminating in masterpiece miniature paintings. Many classical works and memorable books of ﬁction and poetry were decorated by famous Hindu and Muslim master artists. The colours and gold decorations used by these masters are still vibrant in the manuscripts that are preserved in museums in India and abroad.

Indian classical music is a distinctive music system in the world where human voice and the musical instruments create a state of rapture for the listener that is compared to having an out-of-body experience, or where the consciousness in the act of listening to music rises to higher levels. Khayal gaaiki, which was the invention of Muslim musicians met with dhrupad, an Indian deep-rooted tradition, and became part of the same music system. There were other adaptations like the tabla and the sitar. The veena and its diﬀerent forms, the ﬂute, and all sorts of drums existed before. The Mughal court was a major sponsor of artists and music and musicians. The stories of Mian Tansen’s melodious echoes in Emperor Akbar’s palace in Fatehpur Sikri are too well-known to be repeated here. Similarly, Hindu rulers patronized music and musicians and diﬀerent gharanas1 emerged as a result of the diﬀerent styles of singing.

A composite culture and civilization requires a common language more than anything else. This evolution had started in the eleventh and twelfth centuries and by the thirteenth century both Hindus and Muslims were using the dialectal prototype of the same language. Although Persian was used for administrative purposes, the language of popular use was known by diﬀerent names, starting with Hindavi or Rekhta and Braj and Khari. Kaisth Hindus who worked for the royal court excelled in Persian writing. In the words of Husain,‘Leaving aside Abul Fazl and Aalamgir, there were few Muslim prose masters who could stand comparison with Munshi Har Karan, Chander Bhan Brahman, Munshi Madhav Ram, Munshi Lal Chand, and Munshi Uday Raj’ (Husain 1946: n.p.).

Two other areas where the contributions of Hindus were signiﬁcant were history and Persian poetry. Many accounts of the Muslim rule in India were recorded by Hindu historians. In Persian poetry, several names deserve a mention. Chander Bhan Brahman (1574–1662) wrote during Shahjahan’s reign. He pioneered experiments in ghazal-writing containing Indian thought patterns and metaphors and was associated with the court of Dara Shikoh. He is often quoted for his ingenious Persian couplet:

My heart is that of a Kaﬁr.
I took it to Kaba many times but it came back as a brahmin.

Chander Bhan Brahman was also the author of the ﬁrst regular Urdu ghazal. Inspired by the proto-Rekhta model of Amir Khusrau, the hybrid Urdu based on the Khari dialect of Hindi had reached a stage of development by the time of Shahjahan when Urdu ghazals could be written in it. Of the ﬁve extant couplets written by Chander Bhan Brahman, we present three below:

In what kind of a city
God has brought me?
There is no beloved, no saqi,
no cup, or wine.

I want to recite
the name of God
but how can I do it?
There is no rosary, no
counting beads, no
garland, or loop.

Brahman is wandering around
to take a dip, to have a bath.
There is no Ganga, no Jamuna,
no river,or rivulet.

After Dara Shikoh’s tragic death, Chander Bhan Brahman moved to Benaras and spent the rest of his life as a recluse. Other distinguished poets of this period included Anand Ram Mukhlis, Lachhmi Narain Shaﬁq, Kishan Chand Ikhlas, Banvari Das Vali, Syalkoti Mal Varasta, Jaswant Rai Munshi, Shiv Ram Haiya,Tan Sukh Rai Shauq,Tek Chand Bahar, and Anand Ghan. An interesting example of how Hindu and Muslim poets socially bridged the religious diﬀerences was the practice of starting with the prayer associated with the language (such as Persian with Islam and Hindi with Hinduism). Thus, a Hindu writing in Persian will start with ‘bismillahi r-rahman r-rahim’ (In the Name of Allah, the Universally Compassionate, the One who bestows special Mercy) and a Muslim poet writing in Hindi will start with a prayer-phrase in praise of Sri Ganesh or Sarasvati.

Another development of great literary signiﬁcance was the arrival of many Iranian poets to India from places such as Samarqand, Balkh, Bukhara, Ghazni, and Khuraasaan. These poets loved India and its political and cultural environment, and they expressed their thoughts in beautiful poetic language celebrating its natural beauty, freedom of religion, and colourful customs. Some examples of their poetic works are:

Iran did not oﬀer the means to acquire
the talent that I desired.
Without coming to India,
even henna does not get the colour
that is hidden in it.

I ﬁnd myself in the temple
worshipping idols.
O Ghazali, this is a corner
that I would not exchange
even for Jamshed’s kingdom.

The one who stopped me
from idol worship,
why is he going around
and chasing walls and doors?

My love has driven me
to the idol
and the idol house.
What face do I have to show
to the faithful?

1. A gharana is an organizing principle in the Indian classical music system that brings together artists who owe allegiance to a certain master singer and follow his style of singing.
2. For complete ghazal, see Sriram (1907, Volume 1: 574–5). Also, Kaiﬁ (1950: 25).

This is an excerpt from The Urdu Ghazal: A Gift of India's Composite Culture written by Gopi Chand Narang, translated from Urdu by Surinder Deol and published by Oxford University Press. Republished here with permission from the publisher.

Gopi Chand Narang is professor emeritus at the University of Delhi and Jamia Millia Islamia, New Delhi, India. He is also former president of Sahitya Akademi, and has been awarded several national and international honours for his outstanding contribution to Urdu scholarship.Surinder Deol is the author of Sahir: A Literary Portrait (2019). He has translated Gopi Chand Narang’s seminal study of Ghalib, which was published as Ghalib: Innovative Meanings and the Ingenious Mind (2017). His translation of Divan-e Ghalib was published as The Treasure: A Modern Rendition of Ghalib’s Lyrical Love Poetry in 2014.