Gargi College, hush culture and the inheritance of silence 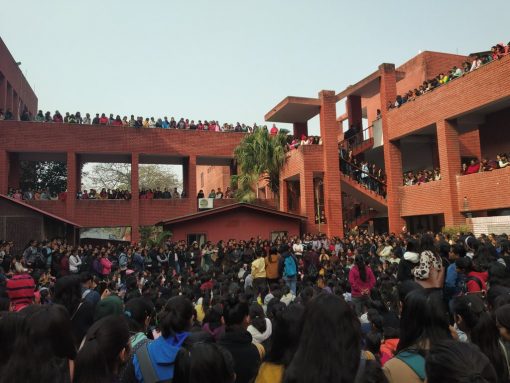 New Delhi: Hundreds of women students of Delhi University's Gargi College on Monday came out in large numbers to protest against and narrate horrifying stories of alleged sexual harassment by a group of men who had forced their way into their annual cultural festival, "Reverie", on February 6. Several of the protesters said that the security personnel and the police just stood by and watched all this while.

The matter came to light when a few students narrated their ordeal in the social media.

The students alleged that they were subjected to "mass molestation" by the outsiders who entered the women’s college by jumping over fences.

NewsClick talked to some of these students to know what actually transpired and their feelings about safety on the campus.

A student (who wishes to remain anonymous) blamed the college administration for not regulating the entry of outsiders during the festival. “The college festival lasted three days. For the first two days, the students of Delhi University, Delhi Technological University and Indian Institute of Technology, Delhi, were allowed entry on their identity cards. On third day, the college had allowed entry with passes exclusively issued by it. Earlier in the day, they were checking the pockets, bags even water bottles belonging to women… Around 4 p.m, they opened the gate and everyone entered. If the college had promised that the scheduled programme will start at 5 p.m, then they should have started then. The programme started at 7: 30 pm…. by then these outsiders molested us, and even masturbated in the open. When the students went to register their complaint, the Principal said if you feel so unsafe, why do you come to festival?" 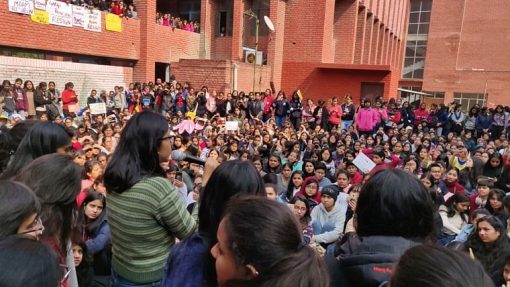 The incident has left a deep impact on some students.

Another woman, who requested anonymity, said that the incident has made her rethink about her studies. “The women were not only molested, they were chased till the Metro station. When all this was going on, the college had put jammers on. So, nobody could call their friends, teachers or police to seek the help,” she said, adding that instead of offering help, the administration remained a mute spectator.

“The Principal indirectly blamed us for situation. I mean, molestation and abuse are not a choice. Why do we seek admission to a women's’ college? Because we feel safe there. We get more freedom and it ultimately helps us in developing our personality. In such a situation, which parent will send their children to this college?", she added.

Some students said this was not the first time when illegal trespassing has happened in the campus.

Gousia Iqbal, who is doing Honours in political science, said the college witnessed similar illegal trespassing last year during the festival. “Pictures of men climbing the wall had gone viral last year, too, and the matter was reported to the administration. Had the administration taken action, this incident could have been avoided."

Iqbal further pointed out to the “culture of silencing” voices by the college administration. “The students of the college had decided to hold a silent protest against the Citizenship Amendment Act. But the administration declined permission saying that they will not be able to protect them if any unruly element attacks them,” she said. 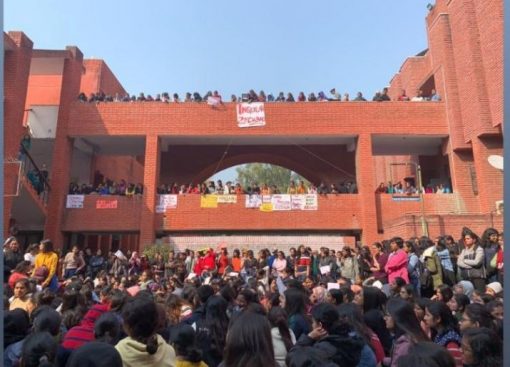 Another student narrated her ordeal to Newsclick. "Molestation and abuse are an annual phenomenon in the college. I was grabbed by my buttocks last year when I was standing in the queue to enter the college. Another boy came and tapped my friend's breasts. Before we could respond, he disappeared into the crowd," she said.

After public outrage, the Delhi Police registered a First Information Report (FIR) against the unknown persons. The police officials said that a case had been registered at the Hauz Khas police station under IPC Sections 452 (house-trespass after preparation for hurt, assault or wrong­ful restraint), 354 (assault or criminal force to woman with intent to outrage her modesty), 509 (word, gesture or act intended to insult the modesty of a woman) and 34 (acts done by several persons in furtherance of common intention). 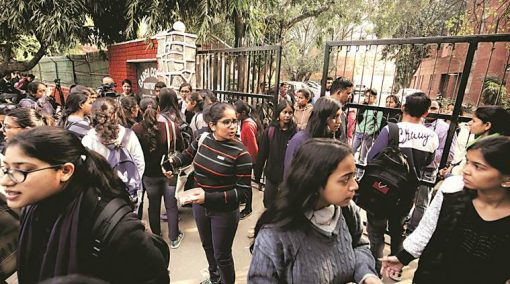 Reacting to the incident, Delhi Chief Minister Arvind Kejriwal on Monday said misbehaviour with women students at Gargi College was "extremely unfortunate" adding that the accused must be given stringent punishment.

“The misbehavior with our daughters at Gargi College is extremely unfortunate. This cannot be tolerated at all. The culprits should be given stringent punishment. It should be ensured that the children studying in our colleges are safe," Kejriwal said in a tweet.

Delhi Commission of Women Chairman Swati Maliwal has asked the college authorities to preserve CCTV footage and summoned the Delhi Police to submit its response. "They stood there watching. It has been four days, but the police and the college has kept quiet. They cannot shrug off the responsibility of investigating incidents of sexual harassment and molestation that took place on campus on February 6" she said. 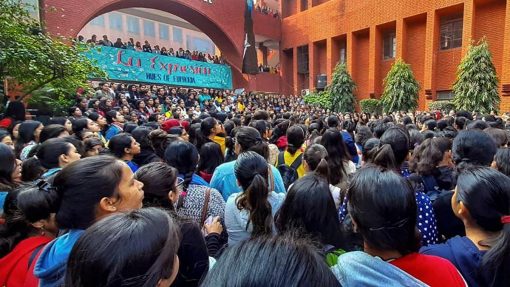 Responding to the horrific incident, the All India Democratic Women Association (AIDWA), in a press statement, called out for fixing the responsibility. “College authorities took no notice of the complaints of the women. AIDWA demands that the police take cognizance of the incident and immediately bring the culprits to book. It also demands that the University look into the insensitive and irresponsible behaviour of the Gargi college authorities,” it said.

Congress MP Gaurav Gogoi, who raised the issue in Lok Sabha, said sexual harassment and bullying often takes place in many higher education institutions and action should be taken in such incidents.

NewsClick tried to reach the college principal Promila Kumar for her response, but she remained unavailable on phone.