What should be Shaheen Bagh’s goal: Repeal Section 14A of Citizenship Act 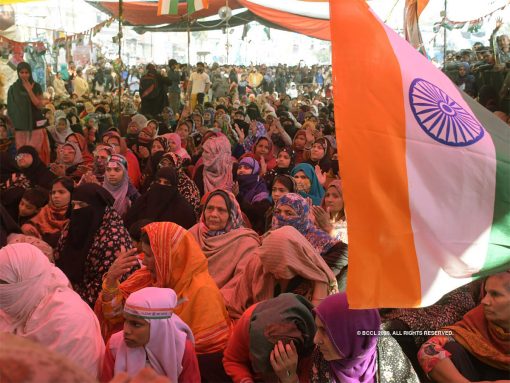 The protesters have been clamouring for the withdrawal of the CAA, the National Population Register and the National Register of Indian Citizens, the triad of instruments the government is said to employ for distinguishing Indian citizens from illegal immigrants. The CAA can acquire a sharp, discriminatory edge only because of the NRIC, which Section 14A of the Citizenship Act, 1955 mandates.

The CAA seeks to grant and expedite citizenship for non-Muslims who slipped into India, without valid travel documents, to ostensibly escape religious persecution in Bangladesh, Pakistan and Afghanistan. This privilege will have a substantial meaning only when those whose citizenship is in doubt are separated from those whose status is not in question.

This is because all residents of the country, other than foreign nationals, are considered Indian citizens until doubts are raised about their status, and they are determined to be illegal immigrants. This will more or less remain the situation even when rules are framed for implementing the CAA—for instance, the type of documents non-Muslims from Bangladesh, Pakistan, and Afghanistan will need to apply for Indian citizenship.

Those who can claim immunity provided under the CAA—for instance the residents excluded from the National Register of Citizens for Assam—can apply forthwith and secure Indian citizenship. However, outside Assam, every person will be regarded an Indian citizen although some of them may not have documents to prove their citizenship status and, therefore, could be denied, say, the Indian passport.

The CAA, however, will become discriminatory as soon as two, separate categories of bona fide and doubtful citizens are created countrywide. This is because the CAA’s protective shield cannot be claimed by Muslims clubbed in the category of doubtful citizens, as well as by those non-Muslims who did not come from Bangladesh, Pakistan, and Afghanistan. Unless they prove their Indian citizenship, they would run the risk of being disenfranchised, detained and deported.

It is through the interlinked process of NPR-NRIC that the two categories of citizens and non-citizens will be created.

The NPR lists names of all those who have been residents of India for over six months, regardless of their nationality. From this list, all those whose citizenship is in doubt will be segregated by the local registrar, whether at the taluka or town level. They will have multiple appeals to prove their bona fides, but once they exhaust all opportunities their names would be excluded from the NRIC.

Another sub-section authorises the central government to prescribe the procedures for compulsory registration of citizens. This is reiterated in section 18 (2) (ia) of the Citizenship Act. It was under the powers conferred by section 18 that the central government framed the Citizenship (Registration of Citizens and Issue of National Identity Cards) Rules, 2003, which provides that the NRIC has to be prepared from the NPR.

In other words, repeal Section 14A of the Citizenship Act, 1955 and the legal basis for the NPR-NRIC falls.

Critics of the movement against the new policy for determining citizenship wonder why protesters should not believe in Prime Minister Narendra Modi’s assurance regarding the NRIC. Theirs is a reference to Modi’s speech of 22 December, in Delhi, in which he claimed that his government had not even discussed the NRIC.

Modi’s assurance was reiterated by Minister of State for Home Affairs Nityanand Rai, who, in a written reply to a question in Parliament, said last week, “Till now, the government has not taken any decision to prepare National Register of Citizens at the national level.”

Their assurances have been disbelieved because of the contradictory voices emerging from the government.

For instance, on 1 October, Home Minister Amit Shah said at a rally in Kolkata, “I today want to assure Hindu, Sikh, Jain, Buddhist and Christian refugees, you will not be forced to leave India by the Centre.” Shah said that before the NRC is implemented in Bengal, the Citizenship Amendment Bill will be implemented. He then, in his typical belligerent style, added, “I am telling you that we will not allow even a single intruder inside India. We will expel all of them.”

The CAB has become the CAA, which provides a safety net to the same category of social groups that Shah had spelt out. Who are the people to believe—Modi or Shah?

This confusion deepened as Union Law Minister Ravi Shankar Prasad said, “Our commitment is there to NRC. But the government is very clear about it…whenever it is done, it shall be in accordance with the legal requirement of the Citizenship Act and the rules therein.”

A fortnight before Nityanand Rai’s written reply to Parliament, Defence Minister Rajnath Singh said, “There has been no discussion yet. But even if, hypothetically speaking, a country wants to build a NRC, why should it be opposed. Should the country’s citizens not have a register of their own.”

These contradictory statements show that the government has not categorically ruled out the NRIC. It merely says that the decision on the NRIC has yet to be taken. This holds out the possibility that the exercise for preparing the NRIC could be taken after the one for NPR is completed.

The NPR exercise, which has been scheduled between 1 April and 30 September, has aroused suspicion about the government’s intent because residents will be asked to provide the date and place of birth of their parents. It will become easy to track whether a person or his or her ancestors came from outside India. They will become particularly vulnerable to officials marking their citizenship doubtful during the exercise for preparing the NRIC.

A few ministers have claimed that the requirement for disclosing the date and place of birth of parents is voluntary. For instance, Union Minister Prakash Javadekar said at a press conference, “The question [regarding parents] will be considered dropped as only those who want to respond will do so.”

Such an option will, nevertheless, still create two categories of people—those who voluntarily disclosed the date and place of birth of their parents, and those who did not. During an NRIC exercise in the future, all those who withheld information about their parents would run the risk of being slotted in the doubtful citizenship category and asked to prove their bona fides. Among them, obviously, Muslims will be specially profiled, given the Bharatiya Janata Party’s bias against them, evident from their virulent campaign for the Delhi Assembly elections.

The only way to allay the fear of the opponents of the citizenship law is to repeal Section 14A of the Citizenship Act, 1955, which should be the demand of citizens thronging the sit-ins at Delhi’s Shaheen Bagh and elsewhere.

First published in NewsClick
The author is a freelance journalist. The views are personal.