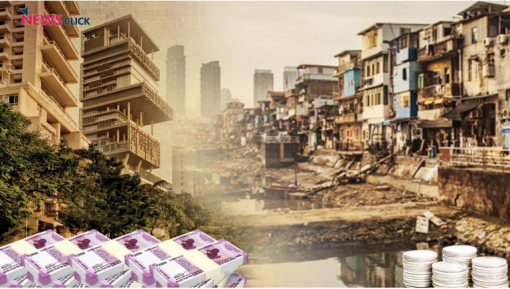 Wealth data are quite unreliable, and wealth distribution data even more so. Not much faith can be reposed on the absolute figures; but cross-country comparisons, and also movements in the shares of the top decile or percentile of the population over time in any country, are less likely to be affected by the infirmity of the absolute figures.

The fact that India has been witnessing growing wealth inequality, in the sense, say, of the share of the top 1% in total wealth, is quite indubitable, as is the fact of its having a higher level of wealth inequality today than most other countries belonging to the group of advanced and “newly emerging” countries.

In fact, in this group of advanced and “newly emerging” countries, India has among the most unequal distributions of wealth; only Putin’s Russia and Bolsonaro’s Brazil have a higher share of wealth being owned by the top 1% of the population in 2019 than India.

This share had increased almost everywhere among these advanced and “newly emerging” countries between 2000 and 2019; the increase in the case of India was from 38% to 45%.

What is particularly remarkable is that India’s wealth inequality is now greater than those of its neighbours, according to every measure, whether it is the Gini coefficient or the ratio of the wealth of the top 10% of the population to that of the bottom 10%. In fact, among all South Asian countries, barring Afghanistan, India has the highest level of inequality. This was not always the case; India’s wealth inequality has increased during the neo-liberal period to a point where it is now worse than in countries in the neighbourhood.

Why has India become a country with such extreme wealth inequality? The immediate answer that would be given is that this is something which accompanies high growth; and since India has been a high growth country of late, it is not surprising that wealth inequality, too, has increased here under neo-liberalism.

The reasoning advanced for this is simple. High growth requires a high ratio of investment to GDP, since the capital-output ratio changes only slowly over time. Correspondingly, it entails a high rate of capital accumulation.

Under a neo-liberal regime where public investment plays a reduced role, this entails a high rate of growth of the capital stock in the hands of the capitalists, and hence a high rate of growth of capitalists’ wealth. While the wealth of the poor, in the form of a few personal possessions or modest dwelling units, remains more or less unchanged, the wealth of the rich thus increases in a period of high growth, which means that wealth inequality increases in such a period.

This argument, which would make increased wealth inequality a price to pay, as it were, for a high growth rate, is, however, logically untenable. But before seeing why, let us first note a preliminary issue.

If the high growth rate is because of a rapidly growing small capitalist or petty production sector, then it could even be accompanied by a fall in the share of the top 1% in total wealth. Whether high growth is accompanied by growing wealth inequality in the sense of an increase in the share of the topmost percentile group, depends, therefore, upon the nature of that growth: which are the dynamic sectors, and what size of capital is prevalent in those sectors. There is, therefore, no necessary increase in the wealth-share of the topmost percentile group accompanying an increase in the growth rate. The fact that it has occurred in India speaks volumes about the nature of our growth, even on this reasoning.

The logical infirmity of this reasoning arises for a simple reason, namely that a high rate of growth of capital stock in the hands of the capitalists does not necessarily mean greater wealth in their hands. Capitalists do not necessarily get back as profits (and hence savings which actually constitute addition to their wealth) all that they invest. Hence, even if the share of investment in output goes up for achieving high growth, what it entails for wealth inequality is an altogether separate matter.

Consider a simple example. Suppose private investment goes up by Rs 100. This in a closed economy would raise savings by Rs 100 (with public investment given). With the Rs 100 of additional investment, income will go up, say, by Rs 250, because of the multiplier (i.e., because of the total extra demand generated including the accompanying increase in consumption demand). If the tax-GDP ratio is 20% and the savings-GDP ratio is also 20%, and all savings are assumed to be done by capitalists and all taxes paid by them, then capitalists’ savings will go up by Rs 50, and government revenue and hence government savings will also go up by Rs 50. An additional investment by capitalists, therefore, would have increased their wealth by Rs 50. But if the government simultaneously reduces taxes on capitalists by Rs 50, then their savings and wealth would go up by Rs 100.

At the world level, for instance, the period of nearly two-and-a-half decades after 1950 witnessed very high growth, the highest ever in the entire history of capitalism (over such a period), and far higher than in the subsequent neo-liberal years. Yet, this period, sometimes referred to as the “Golden Age of Capitalism”, did not witness any such increase in wealth inequality as the subsequent neo-liberal period did. The reason why it did not do so, despite very high growth rates was, among other things, heavy wealth taxation (and corporate taxation in general) that was levied during that period. Taxation, therefore, plays an important role in determining movements in wealth inequality.

It is not only wealth taxation that determines movements in wealth inequality. It is all kinds of taxation, including taxes on corporate profits, that matter. Wealth taxation, of course, does, but as the above numerical example shows, the totality of taxation on the rich, is what is important.

In India, in the neo-liberal period, there has been a substantial reduction in the tax burden on the rich, so that the increase in investment by capitalists has been accompanied by an increase in their wealth as well. It is this fact which largely underlies the increase in wealth inequality in the country.

Wealth taxation, which was always minuscule, was actually abolished by the Narendra Modi government. But in addition, there have been substantial reductions in taxes on corporate profits and on capital gains. In fact, the latest example of such largesse was when the Modi government recently gave tax concessions worth Rs 1.5 lakh crore to the corporate sector as a means of stimulating the economy! This would have the effect either of worsening the crisis (if government expenditure is correspondingly cut back) or of further adding quite gratuitously to the wealth of the corporate sector (if government expenditure is not cut but the fiscal deficit is allowed to increase).

One way of getting the economy out of its current crisis, without further accentuating wealth inequality, would be to enlarge government expenditure and finance it by taxing corporate wealth (which would not even affect the inducement to invest of the corporate sector). But the Modi government, which is sustained by a corporate-Hindutva ,alliance can scarcely be expected to do that.