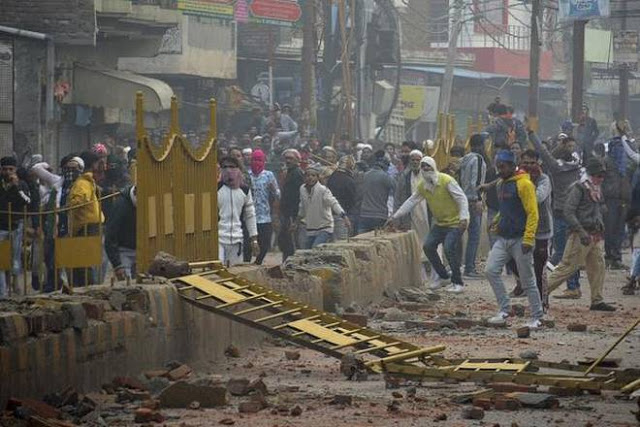 A fact-finding team comprising of Yogendra Yadav, Kavita Krishnan and Riad Azam had visited Meerut on December 25, 2019 to find out information about the violence and the killings that took place in Meerut on December 20, 2019. For the process, the team visited hospitals and met the family members of the deceased so that survivor testimony could be collected.

According to Alauddin, the police had closed majority of the shops on the morning of December 20, 2019 and did not allow people to even stand on the roads. On that day following the Juma (Friday) prayers at the city’s Jama Masjid, protests began erupting at around 3 pm after one of the mosque attendees had a confrontation with the police.

Prior to this, the mosque administration tried their utmost best to pacify the mosque attendees and made sure they left in small numbers from the mosque.

As the protesters swelled in numbers the police lathi-charged them, in return the police began pelting stones, which eventually led to firing by the police. There are some allegations that kattas (local pistols were fired). There have also been allegations that there were certain civilians with the police who also fired.

There is a Shambhu Das Gate Police Chowk on whose either sides live a Hindu and a Muslim population respectively. It is alleged that people from the nearby Rajinder Gate area came and burnt the police check post at around 3.30 pm on December 20, 2019.

It is following this incident that police began cracking down harshly on the protesters and went inside various Muslim neighbourhoods shooting. This eventually led to the death of 6 people (five of them died on the spot and the 6th died on December 24, 2019).

Among those dead, one died at Gulzar-e-Ibrahim Mohalla, one at Jaliwali Gali, one at Ghantewali Gali, two died in Ahmednagar (9 and 10 No Gali). Another person got shot near City Hospital and eventually died at a hospital in Delhi on December 24, 2019. The people who died at Gulzar-e-Ibrahim, Jaliwali Gali and Ghantewali Gali were not part of the protests.

Seven injured people had been brought at Falaah-e-Aam Hospital one after the other between 4-5.30 pm on that day. Since the hospital did not have the requisite infrastructure at that time, the patients were given first aid and referred to the Mulayam Singh Medical College.

Asif, 20 years old, e-rickshaw driver, resident of 10 No Gali (Ahmednagar): Asif was one of the six deceased. He went out of home before Juma prayers on December 20, 2019 for work. When things turned bad, he kept his e-rickshaw at Hapur Garage and was coming home.

His family-members tried reaching him on phone, but they were unable to. At 10 pm in the night, the person who drove him from Fallah-e-Aam Hospital in the ambulance informed the family that Asif was in the postmortem section of the medical college.

He was shot near City Hospital, Hapur Road. He sustained bullet injuries in his chest.

The family members were not allowed to see the body at that time and were asked to come in the morning. The police did not allow the burial in their locality. He was eventually burried at Ansaw Qabristan in Jamia Chowk, where their relatives live. The family has not received a postmortem report yet. Cases have been filed against Asif calling him the ‘mastermind’ of the violence that broke out on December 20, 2019.

Aleem- 24 years, Gali No 9, Ahmednagar, worked at Rotiwale Hotel: He went out of the home at 10 AM on December 20, 2019. Police closed his hotel at 3 pm on that day. He was coming from Hapur Adda buying some groceries. His brother received a call from a relative at 4 pm saying that Aleem was shot. Aleem’s father-in-law Habeeb Mawaniya had also called saying the same.

Aleem suffered a headshot near the City Hospital. The family has a video of Aleem lying dead on the spot after having sustained the injuries.

The family went to the medical college at 6.30 am in the morning on the next day. They were shown a different body at the morgue. It was only after the intervention of the local MLA that they were shown the body. They were not allowed to the dead body at home. He was buried at Ansar Qabristan, close to where Haroon, deceased's elder brother, lives.The postmortem report has not been received yet. They have requested the local MLA for help.

The worst thing that has happened in Meerut is that poor, underprivileged people have been killed, and on top of that cases have been filed against those who died.

These people were mostly the breadwinners of their family. No FIR is being accepted by the police on behalf of the family members of the deceased.

The situation in the Muslim neighbourhoods remains tense and the people are tensed. They anticipate more raids by the police, hence the male members stay awake all-night guarding their homes. There is an urgent need to provide both legal help as well as financial help to these families to help reorganise their lives.