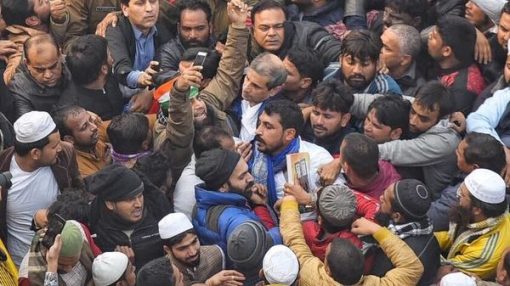 New Delhi: Carrying tricolour and 'Save Constitution' banners, thousands of people rallied in the national capital on Friday to continue their stir against the amended citizenship law, even as security forces were put on high alert in various states after at least three deaths during Thursday's nationwide protests.

Mobile internet and SMS services were suspended in parts of Karanataka and in Uttar Pradesh, where fresh clashes erupted between protesters and police in Gorakhpur. Two persons had died in Mangaluru in police firing, while one had died in Lucknow during simultaneous protests across multiple cities on Thursday.

In Delhi, additional security arrangements were made in view of the Friday prayers and prohibitory orders were imposed in sensitive areas.

But a massive protest broke out in the Jama Masjid area soon after the afternoon prayers, while Bhim Army chief Chandrashekhar Azad was detained after his outfit held a protest march despite denial of permission from police.

Bhim Army said police first tried to detain Azad at Jama Masjid itself but he managed to get away, before later being detained near Daryaganj. Before being detained, he was heard raising slogans against the Citizenship (Amendment) Act (CAA) and also reading out the preamble of Indian Constitution.

The police was seen using drones to keep a vigil, while Delhi Metro gates were closed at some stations, including in the Old Delhi areas.

The city saw protests at various other locations as well including outside the Jamia Millia Islamia, with some groups of protesters offering roses to the police personnel to underline peaceful nature of their agitation against CAA and the proposed National Register of Citizens (NRC).

Police also carried out a flag march in the North-East district which had witnessed violence on Sunday during continuing protests against the amended law, which seeks to grant speedier citizenship only to non-Muslims facing religious persecution in Pakistan, Bangladesh and Afghanistan.

In neighbouring Uttar Pradesh, mobile internet and SMS services of all telecom operators remained suspended in Lucknow and various other places on orders from the government.

In Kerala, police has been directed to maintain high vigil in northern districts in the wake of the killing of two persons in Mangaluru in neighbouring Karnataka.

In a Thursday night alert, state DGP D Loknath Behera instructed the force to be on high alert especially in the districts of Wayanad, Kozhikode, Kasaragod and Kannur, an official statement said.

A series of protest marches by different outfits and blocking of trains and buses were reported from various parts of Kerala past midnight after the news emerged about the deaths.

A large number of Congress workers blocked roads and burnt tyres in Kozhikode, while a group of activists also burnt an effigy of Home Minister Amit Shah.

Karnataka police has restricted entry to Mangaluru for those coming from Kerala. At least 50 men and women who had arrived by a train from Kerala were taken into custody for trying to enter the city without identity cards.

Some mediapersons were detained for entering the Government Wenlock hospital where the post-mortem of those killed in the firing on Thursday was underway on Friday morning.

Police sources said protesters defying prohibitory orders attempted to lay siege to a police station in Mangaluru and tried to attack police personnel, following which force was used to disperse them.

In Assam, Chief Minister Sarbananda Sonowal said he will talk to leaders of anti- citizenship law agitation and his government was committed to safeguard the rights and honour of the state's indigenous population.

In UP's Aligarh, a red alert was sounded and the city has been put under a heavy security cover in view of the first Friday prayers since the police crackdown earlier this week on students of Aligarh Muslim University protesting the new law.

Internet services remained suspended for the fifth consecutive day while banking services and businesses have been badly hit in the city, which has been witnessing continued demonstrations for the past few days.

The situation in West Bengal was largely peaceful with no fresh incident of violence, but vigil was stepped up by the police in several parts of the state to prevent any untoward incident during religious gatherings for Friday prayers.