old post
Students across India rise up in anger after Jamia Milia crackdown against CAA
December 17, 2019 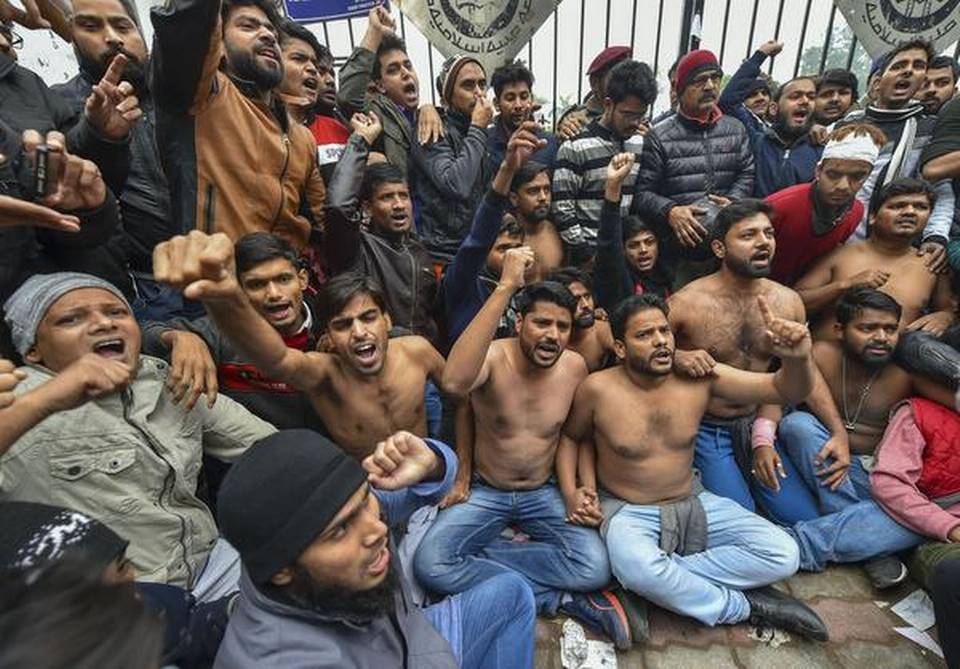 Students rose up across India against the unconstitutional Citizenship Amendment Act (CAA) after their compatriots in Jamia Milia Islamia were violently beaten up in their campus yesterday.

Police in both Delhi and Aligarh used excessive force against student protest. The crack down left a total of nearly 50 students injured and the 100 Jamia students – who had been detained after cops barged into the campus without permission – were only released after a massive show of strength by students outside Delhi Police Headquarters throughout Sunday night.

Earlier today the Supreme Court, responding to a request to take note of the cops’ actions, said “rioting” must stop. The top court will hear the case tomorrow.

Congress leader Priyanka Gandhi Vadra today joined growing protests against police crackdown on students of Jamia Millia Islamia and Aligarh Muslim University. Students from campuses around the country have come out in strong support of counterparts from Jamia and AMU after Sunday evening’s violence over the new citizenship law.

Another video from Lucknow's Darul Uloom Nadwatul Ulama with the police vehicle in sight as students protest in solidarity with #JamiaMilia and #AligarhMuslimUniversity #CAA2019 pic.twitter.com/XzpxbCEvFH

#LIVE: IIT-Bombay students protest against the atrocities on students of #JamiaMilia and #AMU despite refusal of permission by Dean-students affairs for march #JamiaProtest @IndianExpress @ie_mumbai pic.twitter.com/SWjlq5BBIX

Students threw stones at the police who kept them shut within the gates as a massive protest erupted at a university in Lucknow. Hundreds of students of the Nadwatul Ulama Institute pushed against the main gates as the cops kept the gates firmly shut. The institute has advanced its winter vacation by a week and will reopen on January 5.

Sunday’s police crackdown on the students has triggered protests at several colleges, including the IITs in Mumbai, Chennai and Kanpur. Students of Mumbai’s Tata Institute of Social Sciences (TISS) boycotted classes today in solidarity with the Jamia and AMU students and gathered on the campus for a peaceful protest. Students of Mumbai University too planned protests.

A group of Jamia Millia students stood shirtless in the bone-chilling cold outside the university gates this morning protest  to protest Prime Minister Narendra Modi’s statement that protesters can be recognised by their attire.

In other parts of the country, students of the Indian Institute of Science (IISc) in Bengaluru, Banaras Hindu University in Uttar Pradesh and Chandigarh University have planned protests against the amended Citizenship Act.

Lawyers Indira Jaising and Colin Gonsalves requested the Supreme Court to look into the violence against students and send retired judges to the two universities to investigate what went down. Ms Jaising called it a “serious human rights violation”.

Protests by students and others have erupted across the country over the new citizenship law that makes it easier for non-Muslims from Pakistan, Afghanistan and Bangladesh to become Indian citizens. Critics say the law discriminates against Muslims and is against secular principles of the constitution.