Why Sabarimala Ruling Will Not Derail Kerala’s Progressive Impulse 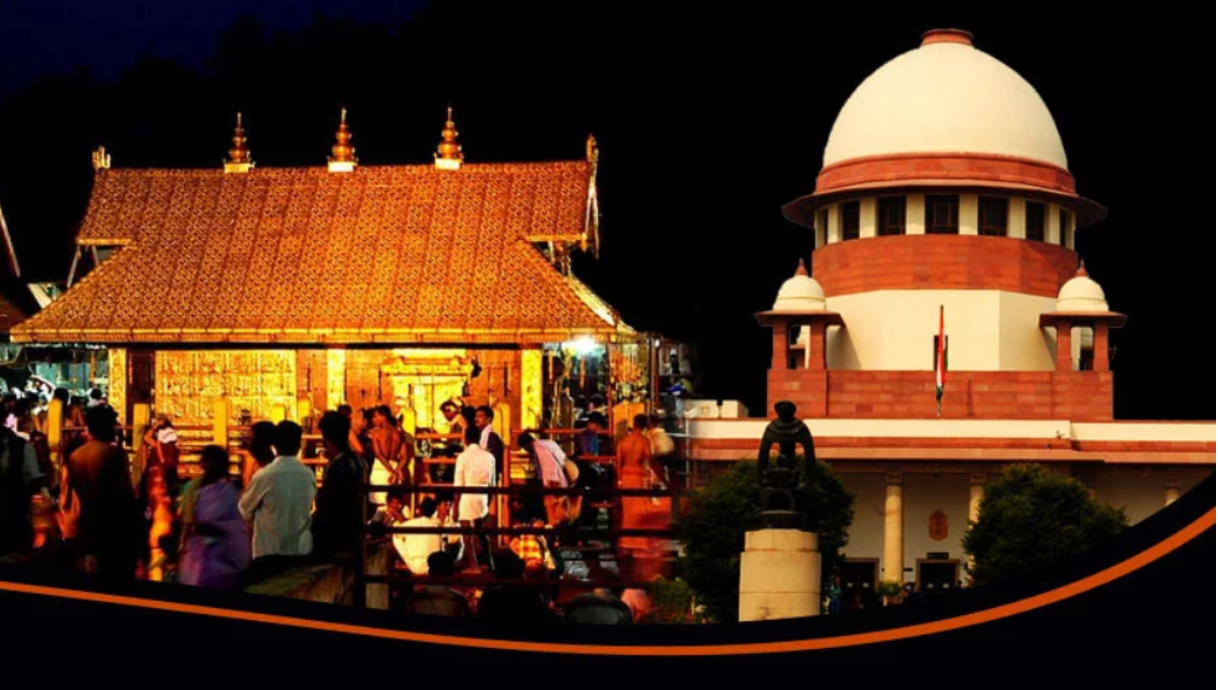 The majority verdict pronounced on November 14 by a five-member Supreme Court bench—with two dissenting judgments—on the question of whether women between the ages of 10 and 50 may worship in the Sabarimala temple has not provided any closure to the question at hand. The judgment has in fact resulted in two potentially disruptive outcomes. By not taking a clear stand on whether women of menstruating age may or may not pray at the Sabarimala shrine, in other words, by not issuing a stay on the 28 September 2018 order of a Constitution Bench of the Supreme Court that clearly ruled in favour of women entering the temple, the majority judgement has left the issue open to interpretation and thereby to another possible phase of lawlessness. Secondly, it has broadened the focus to include the question of women’s discrimination in other religions.

In the short run, the studied vagueness of the 14 November judgement reopens the question of whether women of menstruating age should be enabled by the state to pray at the Sabarimala shrine on the eve of the Sabarimala season that started on 16 November. This could potentially re-kindle the violent protests against temple entry for women led by Opposition parties (notably the Bharatiya Janata Party), a campaign that had meanwhile lost much of its persuasion and reach.

According to press reports quoting the Travancore Devaswom Board that administers the temple, this year 65 women who fall in the age bracket of 10 to 50 years have applied online to visit the shrine. Their entry would have in all probability gone smoothly but for the newly-introduced uncertainty that the judgement has given room for. On the first day of the season, newspapers reported that 10 women of childbearing age had sought entry to the shrine, but the police convinced them to return.

Following the ruling, BJP state general secretary MT Ramesh warned the Left Front government of Kerala of “severe consequences” if it encouraged the entry of women, as it did in the last pilgrim season. Chief Minister Pinarayi Vijayan was cautious in his immediate response to the judgement, stating that more legal clarity was needed before the government took a decision on the issue. At a press conference in Thiruvananthapuram he said that many things in the judgement were unclear. For example, will the seven-member bench reconsider the issue of women worshipping at the Sabarimala shrine, or will it transfer the issue back to the five-member bench?

The Sabarimala issue was one the Left Front had hoped was behind it. A cash-strapped government, still dealing with the high social and financial costs of provisioning those impacted by the three deadly natural calamities in the three years it has been in power, deliberately starved of funds by the central government, is once again faced with the prospects of policing mass mobilisations by those who, strangely enough, defend gender exclusion both as a “matter of faith” and, however illogical it may sound, as a constitutional right.

The question of faith and religion versus reason and justice has a long juridical history in pre- and post-independence India, with legal pronouncements that pertain to religious practices, entitlements and prohibitions issued at every level of the judicial pyramid. Together, these have created a welter of conflicting legal precedents and interpretations.

This litigious history, but more pertinently, the import of two recent court rulings upon the 14 November Sabarimala judgement appear clear. The first is of course the September 2018 verdict by a five-judge constitutional bench on Sabarimala worship. This bench, in a well-argued ruling, had supported the entry of women in the menstruating age into the shrine. Denying them this right, it ruled, was a violation of sections 14, 25 and 26 of the Constitution.

The second is the 5 November judgment on the Ayodhya case. With its contradictory reasoning on faith and belief, it seems to have given purchase to the idea that religious faith has primacy over the law. There is a new confidence in the public pronouncements of those who uphold the faith-above-law doctrine, even when—as in the case of Kerala—this means excluding from women of a certain age their right to worship.

In fact, the majority judgement of 14 November does not even address the issue that the 60-odd review petitions raised, namely that the Supreme Court judgement of September 2018 be reconsidered, and the restrictions on women of menstruating age visiting the Sabarimala shrine be re-imposed. In Para 3 of its ruling, the argument veers away from this question and enters an altogether fresh domain, which the petitions do not raise at all. The ruling here draws attention to a batch of unrelated petitions filed in the past in other contexts. It takes up a) Writ Petition No.472 of 2019, which alludes to the rights of Muslim women to enter a dargah or mosque, b) Writ Petition No.286 of 2017, which alludes to the practice of female genital mutilation in the Dawoodi Bohra community and c) Special Leave Petition No.18889, filed as long back as 2012, which raises the rights of Parsi women who marry out of the community. The ruling argues that taken together the batch of petitions and review petitions raise “a substantial issue of law”, namely, “..the interpretation of the provisions of the Constitution touching upon the right to profess, practise and propagate” religion, and that this must be heard by a bench of not five but seven judges.

Chief Justice Gogoi, who wrote and read the judgement, identified seven issues that the new bench could take up. Pertinently, the first of these, namely, “…the interplay between the freedom of religion under Articles 25 and 26 of the Constitution and other provisions in Part III, particularly Article 14”, was fully adjudicated upon in the September 2018 judgment that held that the practice of barring menstruating women from entering Sabarimala, was violative of Articles 25 (equal entitlement of all persons to profess, practice and propagate their religion) and Article 26 (religious denominations are allowed to manage their religious affairs subject to public order, morality and health).

Another question put up for consideration by a larger bench is that of defining “the expression ‘morality’ or ‘constitutional morality’”, and further, if it means “overarching morality in reference to [the] preamble [of the Constitution] or limited to religious beliefs or faith. There is need to delineate the contours of that expression, lest it becomes subjective.”

The term ‘morality’ occurring in Article 25(1) of the Constitution cannot be viewed with a narrow lens so as to confine the sphere of definition of morality to what an individual, a section or religious sect may perceive the term to mean. Since the Constitution has been adopted and given by the people of country to themselves, the term public morality in Article 25 has to be appositely understood as being synonymous with constitutional morality.

The wrapping-up paragraph of Justice Gogoi’s ruling could well be understood as a plea for wiping the judicial slate in the Sabarimala matter clean and starting again from scratch. It states:

“While discussing the questions delineated above, the larger bench may also consider it appropriate to decide all issues, including whether the Kerala Hindu Places of Public Worship (Authorisation of Entry) Rules, 1965, govern the temple in question at all? Whether the aforesaid consideration will require grant of a fresh opportunity to all interested parties may also be considered.”

In other words, all the issues and some new ones that the September 2018 judgement adjudicated upon are up for reconsideration by a seven-judge bench.

In their strong dissenting judgement, both Justice RF Nariman and DY Chandrachud have alluded to the parameters and judicial restrictions of review petitions filed before a court. A review petition is maintainable only under the following circumstances, namely, if a “new and important matter or evidence” is found by the petitioner, or if there was an obvious error or mistake in the order. A review petition is not maintainable if it is a repetition of “old and overruled arguments”, nor merely on the ground that there are two views on the matter.

The dissenting judgement covers the arguments made in the review petitions point by point and rejects them, mostly on the grounds that the petitioners are re-arguing their old grounds.

But perhaps the largest section of the dissenting judgement is kept for explaining the significance of “the rule of law”, a pithy and encompassing term that applies in letter and spirit to all citizens of India. It explains the importance of this concept at length, drawing from British and American case law. The judgement has particularly strong words for representatives of the state and its arms in enforcing the rule of law, and cites Article 144: “All authorities, civil and judicial, in the territory of India shall act in aid of the Supreme Court.”

In a thinly veiled allusion to the political forces that denied women entry to the shrine, it notes: “Any deviation of this high constitutional principle is in derogation of the oath taken by every Minister and Legislator during his term of office. Once this is clearly understood and followed, the rule of law is established, and the shameful spectacle of political parties running after votes, or instigating or tolerating mob violence, in defiance of decrees or orders passed by the Supreme Court of India does not reign instead.”

The Kerala government, which complied with the earlier Supreme Court order by giving women devotees who wished to pray at the Sabarimala shrine full protection in the previous pilgrim season, finds its hands tied by the latest ruling. Is this a major setback to women’s rights to equality? Important though it is for women devotees who wish to enter the temple to be allowed to do so, the Sabarimala issue is not the ultimate marker or test of women’s equality in Kerala. That the first breach into the entrenched practice of gender exclusion in this popular pilgrim centre has come from a combination of enlightened legal intervention and democratic public action is in keeping with Kerala’s long history of progressive social reform.

First published in NewsClick.
The author is a journalist, formerly with The Hindu. The views are personal