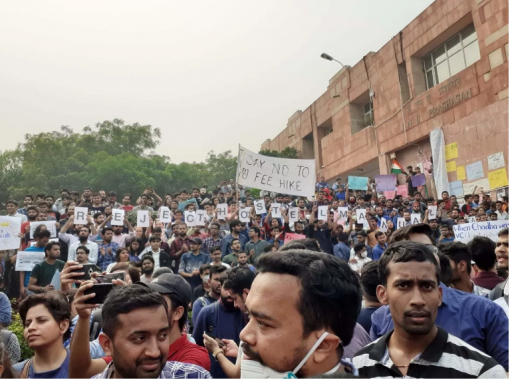 A candid chatter in Bangla among students outside the administrative block in Jawaharlal Nehru University campus soon takes a concerned tone with one of the students asking, "Why is he not talking to us, rather than dictating us the rules to follow? Even we want a solution as our studies are being affected badly everyday." The student was  referring to the Vice Chancellor Mamidala Jagadeesh Kumar, whose latest orders have created havoc among the students who are terming the step as 'forced exclusion.' In its latest orders, the JNU administration has revised the hostel, mess and security fee by 400%, limited the timings of hostel and reading rooms and absolved the terms of reservation in allocation of hostel rooms to students from the marginalised sections of the society.

The protest over the latest measures intensified on Monday, November 4, after few personnel of the Central Reserve Police Force (CRPF) were seen at Birsa Munda Marg inside the campus. The deployment comes as an unprecedented measure in the recent history of the University, irking students who have taken to the streets to express their anguish. Saket, vice president of the JNU Students' Union, said that the deployment comes at a time when students are demanding their legitimate rights. He told NewsClick, "We will not tolerate it. This is unprecedented as we are being termed as rioters whereas the students' movement in  the University has so far been peaceful and has opted civil disobedience for protest."

Another student, pursuing her Masters in International Relations, who requested anonymity said, "The students' march began from Sabarmati Hostel and moved towards the administration block but soon we were stopped by the CRPF and police personnel near the West Gate. However, we continued our protest. The students have been protesting against the draconian measures for a week. However, our VC appears to have disappeared from the campus. In this context, we symbolically filed a missing person complaint to the Delhi Police at Vasant Vihar Police Station."

Explaining about the existing system of scholarships and remuneration at the University, the student said that the measure has forced them to reconsider their option of pursuing education in the University. She said, "I hail from a lower middle class family in Chhatisgarh. Among other things, why students prioritise JNU is because of its just fee structure as it allows even the weakest sections to access education, which they cannot afford in other universities, especially the private ones. At least 60% of the existing students hail from families with income less than a lakh in a year and it is precisely JNU which supported them. With these orders, the students are actually being told to get out if they cannot fund their studies."

She further explained that it is commonly assumed that the students often get scholarships and can support their studies. She said,  "But its incorrect. We get Rs 2,000 as merit cum means scholarship per month. It should be highlighted that we get it at an interval of three to four months. But the administration, through the new hostel manual, expects us to clear the mess due by the 15th of every month. Similarly, MPhil and PhD  students get Rs 5,000 and Rs 8,000 as non-NET fellowship, respectively. This year, only 300-odd students were selected for Junior Research Fellowships whereas the applicants were more than 35,000 students. In other words, less than 1% applicants got the scholarships whereas in the previous years, the ratio had remained at 6%. Considering the new manual, an average student is expected to bear costs worth Rs 7,000 per month. If we fail to clear the dues on time thrice, there are chances that we may be evicted from hostel. Now, we are getting the scholarships at the end of three months but we are expected to clear our dues every month while our families cannot fund our studies. Is it fair?"

Remya, Pooja and Nisha are from Kerala. Nisha, holding a book on climate change, is angry that the administration has the time for installing statues and take other steps for the beautification of the campus, but he cannot release funds for the libraries and hostels. She adds, "Leave everything apart, the administration is expecting that we should pay for sanitation and mess workers. This is a publicly funded university. It is the administration that should be paying the bills. And this is not just about us. The administration must understand that it is about education. If we get educated, we will be the ones contributing to the prosperity of the country. We have overcome so many barriers to come here."

Pooja, who is enrolled at the School of Arts and  Aesthetics, says that the scholars are the national assets of the country and the V-C must understand it. "It is us who help the government in identifying loopholes in their policies. I have many foreign students at my centre who are being paid extra for staying in a severally polluted city like Delhi for pursuing their education, whereas our own government is set on reducing funds for education. Meanwhile, Remya is worried that what is happening in JNU now is just the beginning and this model will be replicated in other universities as it is an assault on education.

However, all students are united in their demand. "We will fight to complete our studies even if the administration brings the army here!," is the one sentence that can be heard resonating from every student in the campus who are fighting for their rights.