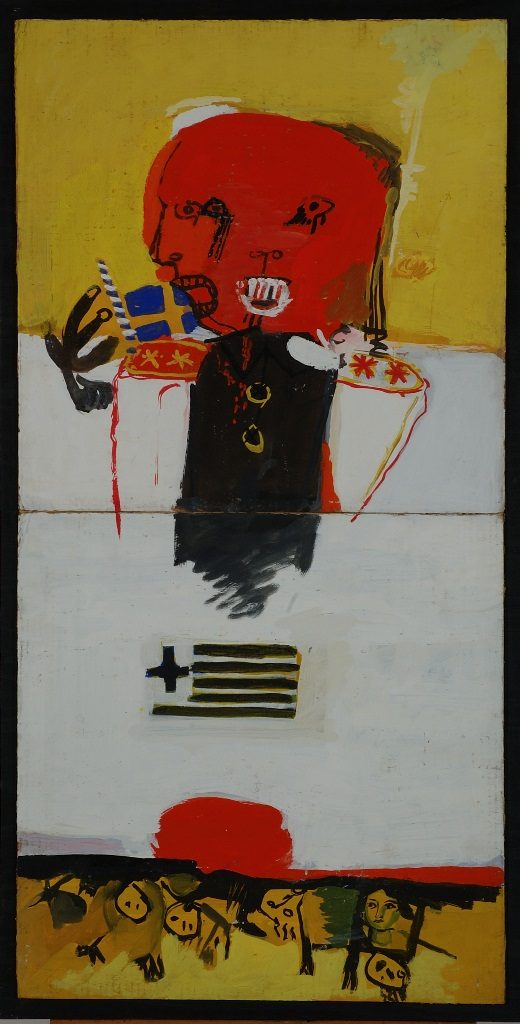 Dimosthenis Kokkinidis, And regarding the remembrance of evils, July 1967.

The advancement of the far right in different regions has imposed an interesting debate on the use of the term ‘fascism’. There are theorists who say that fascism occurred in Italy in a specific 20th century context and can’t be compared with any other government or regime. Other analysts say that the similarities are so great that it is impossible to call them by any other name. How do you position yourself in this discussion? Should we call them fascists or not? Or should we not worry about those terms now?

These debates are important. The issue is not to have the right analysis by yourself. The issue is to have a debate to clarify how we understand the current situation. The reason why we go back and look at the 1920s and 1930s is because we want to understand what authoritarianism within democracy looked like then? Because, after all, [Benito] Mussolini and [Adolf] Hitler came to power through democracy, through the ballot box. And then they deepened the authoritarian role of politics in society.

But the context that produced Hitler and Mussolini, the fascists and the Nazis, was very different from the context now. Then, their main assignment, as it were, from the capitalists, from the bourgeoisie, was to come to power and smash the workers’ movement. That was the main assignment of classical Nazis and fascists in the early 20th century. Today, workers’ movements are much weaker. The assignment from the bourgeoisie is not, ‘hey, fascist, come back to power and destroy the workers’ movement’. It’s not the same situation. It’s wrong to argue by analogy, saying that ‘now we have leaders that say terrible things, they want to lock up journalists, it’s similar to then, therefore it’s the same’. No. Let’s look at the current context for what it is.

So, we have less powerful peasant and workers’ unions now. That created a combustible situation where the bourgeoisie was getting wealthier and wealthier in this period. Thomas Piketty has the data to prove what we already know: there is immense inequality. The bourgeoisie is highly worried about the rise of inequality, the potential that some sort of unrest is going to come. We saw riots break out against the elite – food riots, the Caracazo in Venezuela.

At that point, you see a sharpening of a right-wing turn in ideology, where the elite starts to target certain populations, feminists, minorities, refugees, migrants, and say it’s because of them. ‘You don’t have a job because of a migrant’. It was the neoliberals that actually introduced these ideas into the political discourse to maintain control over the system.

But the neoliberals exhausted themselves. Everybody knows they were responsible for inequality; they were responsible for degradation. And it’s at that point – the left being so weak – that the right appears, the far right, the authoritarian right. And they take what neoliberals introduced. Neoliberals said, ‘we shouldn’t allow too much migration, it’s going to destroy our jobs’. So, they took that to its extreme and made it really vicious and nasty. And they came to power.

The way I understand the growth of these neo-authoritarians, these neofascists, is that they are not conventional 20th-century fascists. There is something quite different. They actually don’t need to destroy the institutions of democracy. They are merely hollowing them out. You still have elections, you still have parliaments, you still have all this stuff. They don’t need a dictatorship, because they’ve hollowed out the concept of democracy. So, by authoritarian and ideological means, they empty democracy, they empty the press, they empty the ability for people to have discussions, and that is how they create this very right-wing viciousness.

So, it’s different from the early 20th century. There is something to learn from that in order to sharpen our analysis, but we need to have an analysis of the concrete conditions of this period.